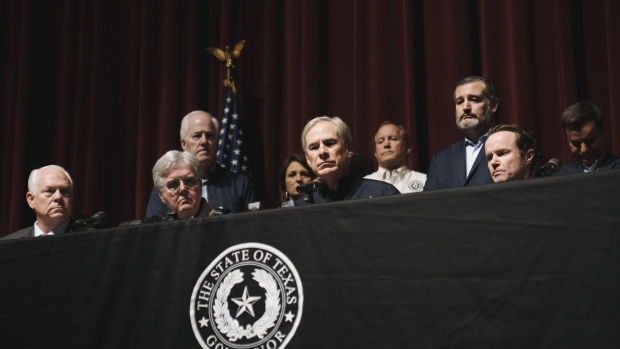 Greg Abbott, governor of Texas, center, during a news conference in Uvalde, Texas, US, on Wednesday, May 25, 2022. President Joe Biden mourned the killing of at least 19 children and two teachers in a mass shooting at a Texas elementary school on Tuesday, decrying their deaths as senseless and demanding action to try to curb the violence. , Bloomberg

Turner also criticized pro-gun politicians planning to speak at the NRA gathering just days after 21 people, mostly children, were gunned down in South Texas in the worst US school massacre in almost a decade. Former President Donald Trump, Texas Governor Greg Abbott and Senator Ted Cruz are among the Republican luminaries scheduled to address the event.

“Canceling the convention would leave the city subject to a number of legal issues,” Turner, a two-term Democrat, said during Wednesday’s council session. “The greater question is why are elected officials speaking there, and what message does that send? You can’t pray and send condolences on one day and go and champion guns on the next.”

The NRA’s 151st annual meeting opens its doors at a downtown convention center on Thursday afternoon and lasts through Sunday. Hotels, office buildings and other city-center properties are bracing for protests.