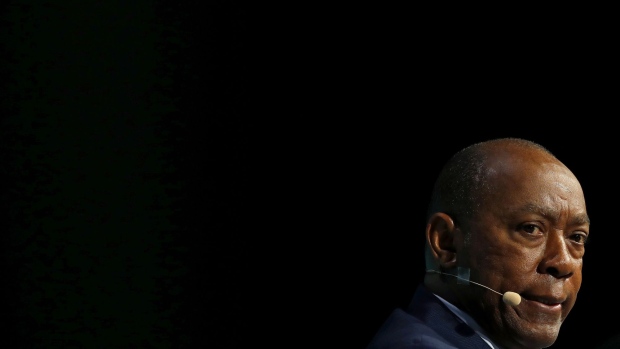 An attendee views Smith & Wesson Corp. pistols at the company's booth during the National Rifle Association (NRA) annual meeting of members in Indianapolis, Indiana, U.S., on Saturday, April 27, 2019. Retired U.S. Marine Corps Lieutenant Colonel Oliver North has announced that he will not serve a second term as the president of the NRA amid inner turmoil in the gun-rights group. Photographer: Daniel Acker/Bloomberg , Bloomberg

(Bloomberg) -- Houston Mayor Sylvester Turner said the National Rifle Association should postpone its convention in the city this weekend out of respect for the victims of the nation’s second deadliest school shooting this week in Uvalde, Texas.

“There comes a point in time when people have to recognize it’s disrespectful to be talking about guns when 19 kids have been killed,” Turner said at a press conference Thursday. “It would be disrespectful for the governor, former presidents and elected officials to show up. No one should have to tell them not to.”

Former President Donald Trump said he plans to keep his scheduled appearance, along with Texas Governor Greg Abbott and other politicians. At the same time, gun control groups have planned protests outside -- and the police said they are boosting security to the point of “near full mobilization.”

Turner urged protesters to demonstrate “peacefully and respectfully,” keeping the focus on the victims of the shooting at an elementary school on Tuesday.

He said the city itself couldn’t cancel the NRA event, planned for more than two years, because of contractual obligations. An estimated 80,000 NRA convention-goers are expected in Houston this weekend.

By midday Thursday, downtown streets around the convention center already were ringed by heavy-steel fencing that restricted foot and vehicle traffic. Horse-mounted police patrols were stationed at crosswalks dotted with visiting NRA members and vendors heading to the venue to collect entrance badges.

Some 8,000 protesters showed up to the NRA convention in Denver after the Columbine High School shooting in 1999.