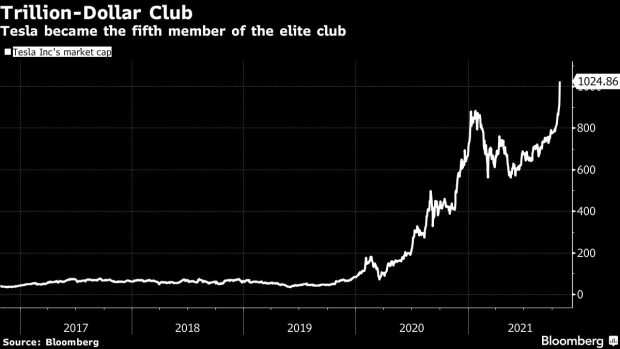 Signage is displayed outside a Hertz Global Holdings Inc. office in San Francisco, California, U.S., on Tuesday, May 5, 2020. Hertz Global Holdings said it entered into forbearances and limited waivers with certain of the Company's corporate lenders and holders of the company’s asset-backed vehicle debt. Photographer: David Paul Morris/Bloomberg , Bloomberg

(Bloomberg) -- It’s not every day that a simple $4.2 billion order creates a $119 billion jump in value for the buyer and seller combined -- some 28 times the size of the sale itself.

But that’s what happened Monday, when Hertz Global Holdings Inc.’s order for 100,000 Tesla Inc. vehicles had an outsized impact on both companies’ shares -- as well as one particular shareholder.

In one of the largest-ever purchases of electric vehicles, Hertz will spend $4.2 billion on the cars, about $42,000 per car, Bloomberg News reported. The announcement pushed Tesla shares up more than 12% and added almost $118 billion to the company’s market capitalization. Tesla is now the fifth-most valuable publicly traded company in the U.S.

That a deal with a recently-bankrupt rental car company is what pushed Tesla over $1 trillion in value surprised even Tesla Chief Executive Officer Elon Musk who tweeted that the company has plenty of demand for vehicles.

Even stranger, Hertz, the buyer in this deal, gained $1.17 billion in value on the announcement. It’s an unusual turn of circumstances for a company that spent most of the summer valued at less than $8 billion.

Musk may not want to look this gift in the mouth. Tesla’s stock surge solidified his position as the richest man on Earth, boosting his net worth by $36.2 billion today alone. He’s now valued at $288.6 billion, according to the Bloomberg Billionaires Index.