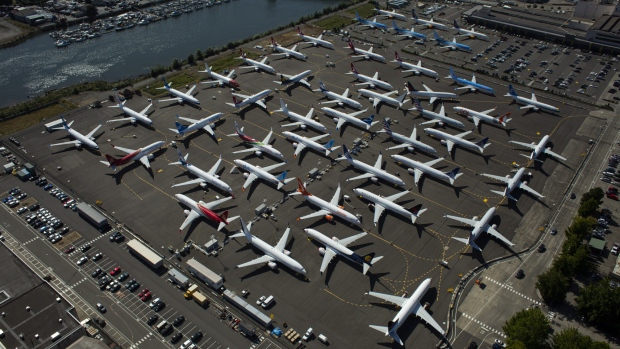 (Bloomberg) -- As Boeing Co. and U.S. regulators reviewed the 737 Max design before its 2017 certification, they calculated how long it would take pilots to react to emergencies.

But that scenario wasn’t an accurate representation of how the plane behaved in two fatal crashes that have led to the worldwide grounding of the jet. The analysis estimated that the automated nose-down commands seen in the accidents were more than 25% less powerful than in reality.

This detail of how the Federal Aviation Administration approved the plane was contained in a highly critical report released Friday. The Joint Authorities Technical Review, a panel of international aviation experts, concluded that such missteps were part of a broader failure to consider how pilots would react to a malfunction in a critical redesign on the plane.

“While issues in human-machine interaction are at the core of all recent aviation accidents and are implicated in the two B737 Max accidents, the FAA has very few human factors and human system integration experts on its certification staff,” the JATR said in the report.

Both the FAA and Boeing issued statements saying that they would study the findings and make changes. Part of the reason that design changes for the 737 Max are taking longer than expected is that the FAA has already enacted measures to better assess risks, agency spokesman Lynn Lunsford said Friday.

The JATR reviewed how the FAA and Boeing approved a feature on the 737 Max known as Maneuvering Characteristics Augmentation System, which was programmed to automatically lower the nose in some circumstances. In the two accidents that killed a total of 346 people, a malfunction prompted the system to repeatedly activate.

While Boeing and the FAA had earlier concluded that pilots would react in time to counteract such a failure, flight crews in Ethiopia and Indonesia became confused and eventually lost control. It’s this disconnect that’s at the heart of the joint review’s findings.

MCAS operates by moving a wing on the tail known as the horizontal stabilizer, which helps adjust whether the nose is pointed up or down. When MCAS sensed that it needed to activate, it moved at 0.27 degrees per second.

However, the planemaker and its regulator only considered how pilots would react when the stabilizer moved at 0.20 degrees per second, which was 25.9% less aggressive.

The calculus was part of a key assessment of whether pilots would react in time to a failure. Under FAA guidance, pilots need one second to recognize the nature of an emergency and another three seconds to react.

Indeed, a NASA study of airline pilots found that they took substantially longer to recognize and react to emergencies, even if the crews expected them, according to the report.

“Modern aircraft can have subtle failure modes that may take substantial amounts of time to be recognized,” the JATR report said. “Furthermore, automation can mask some failures and significantly delay the possibility for the pilot to recognize the malfunction.”

As one of its recommendations, the group urged the FAA to review its assumptions about pilot-reaction times.

“The FAA’s guidance concerning pilot reaction time of three seconds may not be appropriate given current aircraft technology and the current operational environment,” it said.