Taihei Kobayashi has gone from sleeping on the streets of Tokyo to heading a technology startup whose market value topped US$1 billion.

His rags-to-riches story is among the most remarkable to emerge from a small-cap stock boom that’s minting fortunes in Japan. Kobayashi’s company, which helps startups and other firms to design and create new businesses and products, went public in July and its shares have since more than tripled.

It’s an outcome that few could have imagined two decades ago. As Kobayashi tells it, his parents kicked him out at 17 when he quit a prestigious high school to focus on his band. He played music during the day and mostly slept outdoors, using cardboard boxes to keep warm during freezing winter nights. He was homeless for a year and a half.

A series of encounters got him off the streets and eventually into a job as a software engineer. He was one of the core members in establishing the predecessor to the company now known as Sun* Inc., pronounced Sun Asterisk, in Vietnam in 2012. He’s now Sun*’s chief executive officer.

“The winters were cold,” Kobayashi, 37, said of his experience on the streets. “There may have been times when things felt like hell. But I’ve overcome those times.”

According to Kobayashi, his parents wouldn’t accept his decision to drop out of high school. They had made financial plans to allow him to get a university education, he said. Attempts to contact Kobayashi’s parents were unsuccessful.

“They told me to leave, so I left, and that was that,” he said. “I wanted to live my life doing what I enjoyed.”

Kobayashi ended up spending two winters on the streets of the Shinjuku and Shibuya districts of Tokyo.

“I might have died,” he said. “I slept anywhere I could,” he said. “About 80 per cent of the time it was somewhere outside.”

“I didn’t think too much of it,” Fukagawa said. But “my parents seemed worried.”

At 19, a manager of a live-music club took pity on Kobayashi, offering him a job and saying he could crash at the club. He did so for about six years.

Eventually, Kobayashi decided it was time to move on. First, he made some money trading music records online. Then he came across a job advertisement that didn’t require any qualifications or experience. All you had to do was take a test, it said.

The six-hour examination tested applicants on areas including mathematical skills, logical thinking and IQ. Koyabashi passed and started working at the firm, which trained him to become a software engineer.

That’s how he met Makoto Hirai, one of the founders of Sun*. The two agreed there were many software engineers who excelled in programming, but few who could use those skills to come up with working business models. They decided to start a company to bridge the gap.

Kobayashi moved to Vietnam in 2012 to hire staff from the country’s pool of young engineers. In March 2013 the founding members incorporated Framgia Inc. in Japan, which changed its name to Sun* in 2019. The idea was to deploy the engineers to help Japanese startups that were struggling to build a viable business.

“Our stance was to commit ourselves to the growth of those startups, regardless of whether it left us mired in losses,” Kobayashi said.

Over the years, Sun* grew its business, and now has more than 70 clients. The company listed in the Tokyo Stock Exchange’s Mothers market for startup firms in July. Its shares rose almost sixfold to a high in September, taking its market value above US$1.4 billion. They’ve since dropped 37 per cent, with the company’s market capitalization dipping back below US$1 billion. Kobayashi’s 7.9 per cent stake is worth about US$74 million.

Sun* posted net income of 649 million yen (US$6.2 million) on revenue of 3.97 billion yen for the nine months ended September.

Mitsushige Akino, a senior executive officer at Ichiyoshi Asset Management Co., said there’s good demand for the firm’s services but sales and profit are still low and competition could be stiff.

“Things could be difficult,” Akino said. “You have to see whether the company is able to sustain its pace of growth. This is especially so for its revenue, which isn’t much right now.”

Kobayashi, who returned to Japan from Vietnam in 2019, said the company is winning business from bigger firms, including those in the blue-chip Nikkei 225 Stock Average. Its customers include Masayoshi Son’s SoftBank Corp., according to the Sun* website.

“We want to be aggressive in offering our services to big corporations,” he said. “That’s why we went public.”

Sun* is seeking to increase earnings by at least 20 per cent to 30 per cent a year, and doubled staff in its Tokyo office to about 130 people this year, he said. Vietnam continues to be the firm’s biggest office with about 1,300 employees. 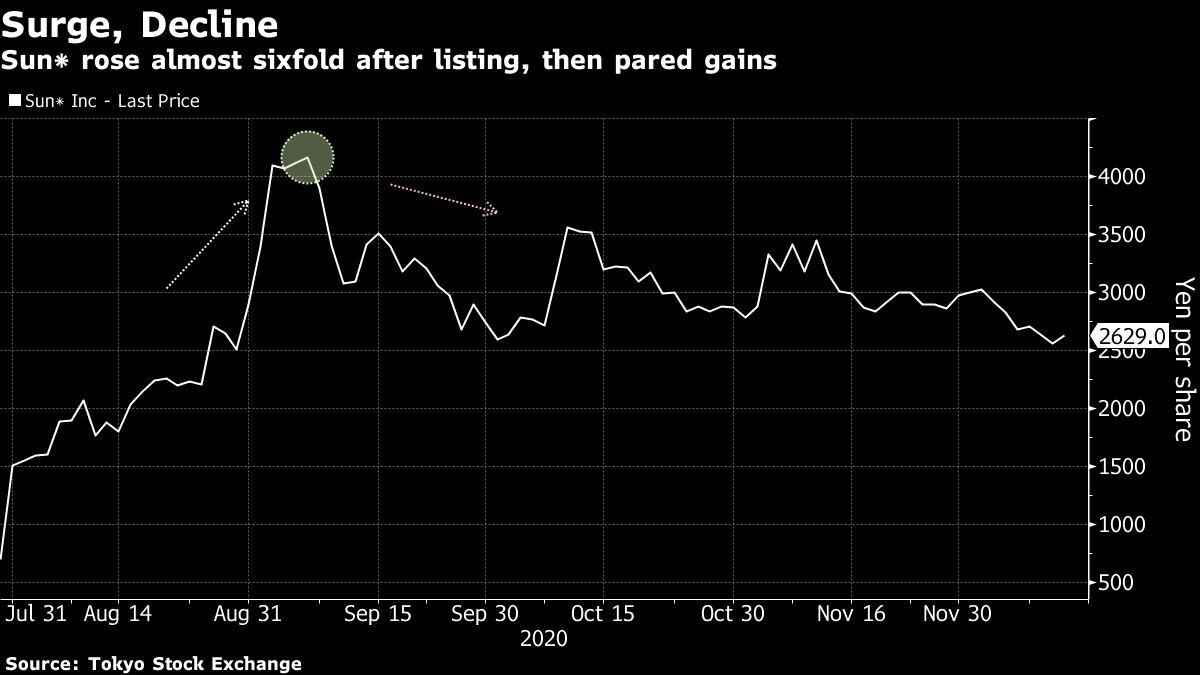 Sun* is one of many companies in the TSE Mothers Index whose shares surged this year as investors bet on technology companies amid the pandemic. The startup gauge hit a 14-year high in October before paring some of its gains. Despite more than tripling, Sun* isn’t even in the index’s top 10 performers this year. The company’s shares trade at about 200 times earnings and about 20 times book value.

“It’s what you’d call a momentum stock,” said Tomoichiro Kubota, a senior market analyst at Matsui Securities Co. in Tokyo, noting its “extremely high” price-to-earnings ratio. “It’ll be impacted by how long the positive trend for the startup Mothers gauge will persist.”

Kobayashi said he’s aware of the risks but not daunted by them. He said he’s faced more difficult challenges before. He has since reconnected with his parents, and his time on the streets is a distant memory.

“What I want to do now is keep working to realize our company’s vision,” he said.

--With assistance from Haruka Kuroo and Hikari Kawano.