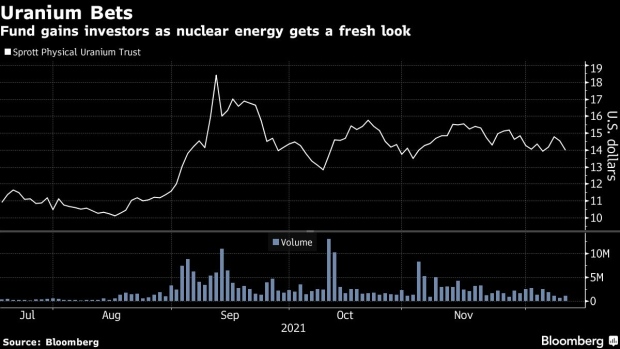 An American flag flies in front of a cooling tower at the Exelon Corp. Three Mile Island nuclear power plant in Middletown, Pennsylvania, U.S., on Wednesday, April 11, 2018. On Sept. 30, Exelon Corp. plans to take Three Mile Island offline because it is no longer profitable. Across the U.S., Nuclear plants are having trouble staying competitive in an era of cheap natural gas, a product of the shale boom. Photographer: Michelle Gustafson/Bloomberg , Bloomberg

(Bloomberg) -- Six months ago, the Sprott Physical Uranium Trust didn’t exist. Now it holds almost a third of the world’s annual supply -- and it’s getting bigger.

The fund’s arrival and explosive growth is sending waves through the market for nuclear fuels and has helped spur a 50% rally in uranium this year. Sprott reports that its assets have swelled to $1.9 billion, forcing the product to almost double its financing limit two weeks ago to $3.5 billion -- the second time it’s had to raise it in two months.

Behind the surge is a race to bet on a nuclear future, with everyone from hedge funds to day traders jumping on board. The Canadian-listed trust, which launched in July, is the only publicly listed fund in North America that invests in physical uranium.

“I don’t know how many regular people would know how to even make a uranium play,” said Bloomberg Intelligence’s Eric Balchunas. “It sort of democratizes the trade.”

There’s growing awareness around the globe that nuclear energy may need to play a larger role as governments move to limit global warming. While uranium’s use has drawn opposition from environmentalists, who worry about reactor meltdowns and the hazards from radioactive waste, proponents say the carbon-free electrical power provided by nuclear energy largely outweigh these concerns.

Sprott, betting on nuclear’s future, has scooped up roughly 41 million pounds of uranium since the summer, which is roughly 30% of annual production.

Traders say the fund is reshaping the uranium market and allowing for more transparent prices.

“The Sprott vehicle allows for price discovery from speculators on a consistent basis. And it’s that consistency of having a potential willing buyer of a uranium that flushes out what the real price,” of uranium is, said Michael Alkin, chief investment officer and founder of Sachem Cove Partners.

When the Sprott trust launched in July, the price of uranium was around $30. Now, the radioactive metal has jumped 50% to $45, according to data from UxC LLC, a leading nuclear fuel market research firm.

“They weren’t the only buyers during that time, but their activity was the main aspect to the market move,” said Jonathan Hinze, president of UxC LLC.

Whether Sprott’s latest financing limit will be able to push up uranium prices even further remains to be seen. The trust’s discount to net asset value is sensitive to uranium prices, and steepens when uranium prices fall.

As long as Sprott keeps raising money in capital markets, it will be a persistent buyer of uranium, said Hinze. And he said the trust’s announcement that it would raise its financing limit to $3.5 billion indicates that there’s an appetite for uranium in the financial world.

“Another billion would have been more what we would have expected. Going to $3.5 billion -- over $2 billion more -- so quickly, that was a bit of a surprise,” he said.

The trust is a closed-end fund. If it were an exchange-traded fund, it would be in the top 5% of Canadian ETFs by asset value, according to BI’s Balchunas.

He anticipates a physical uranium fund will eventually launch in the U.S. given how Sprott has grown and how U.S.-listed uranium equity ETFs, like the Global X Uranium ETF (ticker URA) and NorthShore Global Uranium Mining ETF (URNM), have rallied in 2021.

“What’s been a big market in terms of asset inflows can be exponentially bigger,” Balchunas said.