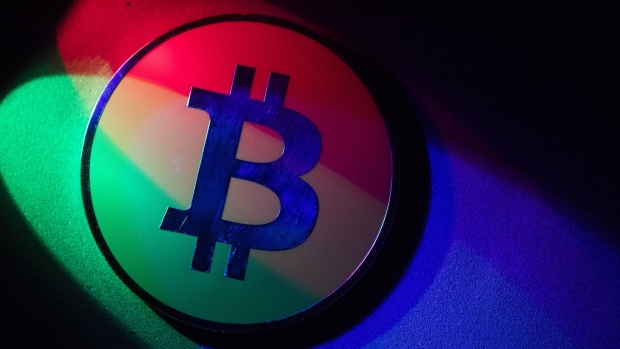 A novelty Bitcoin arranged in Sydney, Australia, on Friday, March 4, 2022. Bitcoin and other cryptocurrencies rose earlier in the week on the expectation that they might gain traction during Russia’s invasion of Ukraine. The advance was then stymied by concern about the effect of international sanctions against Russia. Photographer: Brent Lewin/Bloomberg , Bloomberg

(Bloomberg) -- Power theft in Malaysia for cryptocurrency mining is a problem that’s growing quickly. But the national utility has a few ideas of how to tamp down the practice.

Tenaga, which counts Malaysia’s sovereign wealth fund Khazanah Nasional Bhd. as its largest shareholder, is seeing an increasing number of cases where electricity is used to mine the cryptocurrency illegally -- and expects the tally to continue to grow, President and Chief Executive Officer Baharin Din said in an interview.

Crypto mining, an often energy-intensive computing process via which Bitcoin and other tokens are created, has grown rampantly across the globe as digital assets increased exponentially in value. While there are some efforts to make the process greener, it’s regarded in many situations as environmentally unfriendly.

In Malaysia, crypto mining itself isn’t illegal. But some miners steal electricity, for instance by tampering with meter installation or bypassing the meter and gaining an illegal connection. Cases of electricity theft involving illegal Bitcoin mining operators surged to 7,209 in 2021 from 610 in 2018, according to Tenaga.

“The irresponsible perpetrators are doing it at the expense of the security and reliability of supply for the public at large,” Baharin said. Unauthorized electricity connections can also be fire hazards, he added.

Tenaga has been working with the Malaysia’s anti-graft agency, the police, the Energy Commission and the local councils to nab power thieves, especially among Bitcoin miners. A total of 18 individuals have been arrested with an estimated electricity theft valued at 2.3 billion ringgit ($550 million) from 2018 to 2021, according to Baharin.

“Implementation of the likes of smart metering, meter data management systems, analytic software and digital power quality products will greatly enhance the availability of critical power demand and supply information,” he said. “That may give the utility such up-to-date data for greater monitoring, planning, and control over the entire eco-system -- which includes prevention of power theft.”