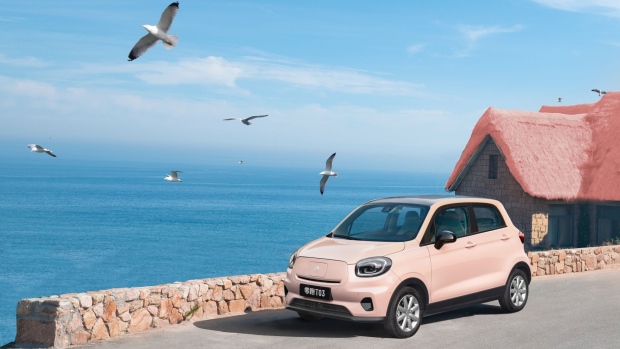 (Bloomberg) -- Zhejiang Leapmotor Technologies Ltd. has more than last week’s disastrous trading debut in Hong Kong to worry about. While the electric-vehicle maker’s T03 mini car is outselling the likes of Nio Inc. and Xpeng Inc. in China, it isn’t making a profit.

Sales of the compact four-seater EV are central to Leapmotor’s success, accounting for almost three-quarters of the startup’s total deliveries since inception.

Leapmotor is trying to move up the value chain. Its C11 SUV and new C01 sedan have prices ranging from 180,000 yuan to 290,000 yuan and that larger, high-end EV market is the segment forecast to show the fastest growth in 2023, according to Frost & Sullivan.

“Starting from so low a market position, I doubt it’s sustainable for Leapmotor,” said Jochen Siebert, managing director at JSC Automotive. “They have to go higher. That’s the only way they can survive.”

Boosting production won’t be easy. Leapmotor has just one 200,000-unit plant in Jinhua, while a second factory in Hangzhou won’t start production until late 2023.

The company’s path to scale hinges on near-flawless coordination between product design, supply chain and production, with little wiggle room for unforeseen delays, according to Bloomberg Intelligence analysts Steve Man and Joanna Chen, who also see direct competition from a phalanx of other mass-market EVs from BYD Co., Volkswagen AG and other established automakers with stronger branding, wider sales networks and greater R&D and production capabilities.

A Leapmotor representative said via email that the company plans to “gradually ramp up our production capacity, alongside the growth of our sales volume.” About one-quarter of the around $800 million raised in Leapmotor’s Hong Kong stock listing will go toward “enhancing our production capacity and capabilities as we continue to scale up.”

Branching out beyond China may be another avenue of growth.

In September, Leapmotor made its first step overseas, exporting 60 T03 cars to Israel, and it’s also set its sights on Europe. Whether international consumers may be wary of the T03’s interactive digital assistant, which uses the 3.0 intelligent voice recognition system of Iflytek Co. -- a tech firm blacklisted by the US -- remains to be seen.

“That will not be a selling point,” said Siebert, adding that first, it was more important for Leapmotor to “get into the profit zone.”

Until then, however, Leapmotor looks like it will at least enjoy strong support from consumers in China.

The hatchback, which comes in a range of colors including pastel pink and pistachio green, targets customers at the lower-end mass market and those in smaller cities who desire a wallet-friendly EV that also comes with sophisticated in-car digital offerings.

Despite its compact design, the T03 -- a step up from SAIC-GM-Wuling Automobile Co.’s pint-size Hongguang Mini, which retails for about 32,800 yuan -- is equipped with two dashboard screens with touch control, an AI voice assistant, preliminary autonomous driving technologies and phone-based connectivity features.

The T03’s battery also gets about 250 miles (402 kilometers) per charge -- comparable to much larger EVs.

Many buyers who have snapped up the car have posted about its cute features, battery performance and slate of digital amenities like unlocking the vehicle using facial recognition. “It’s the best for its buck within my budget,” Youthful Peach wrote to her 14,000 followers on Chinese lifestyle app Xiaohongshu.

“The T03 is the best model you can get in the under 100,000 yuan price range,” said Zhang Xiang, an automotive analyst who’s also a visiting professor at Henan’s Huanghe Science and Technology College. “Its features are better than every other model in the low-end market. It just really stands out.”