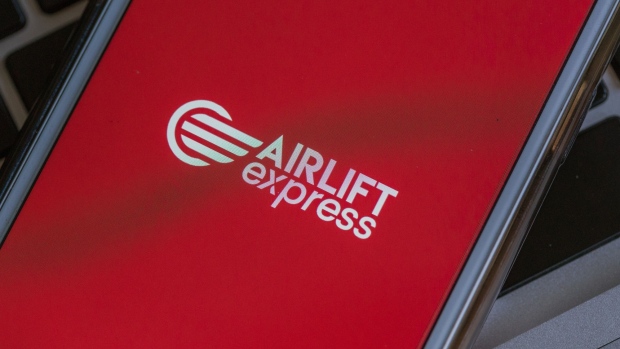 The app of Airlift Express, a unit of Airlift Technologies Pvt, is arranged on a smartphone in Karachi, Pakistan, on Saturday, Nov. 13, 2021. The online shopping delivery platform, which raised $85 million in Pakistan's largest single private funding round ahead of overseas expansion plans, is part of a breakout year where more money has flowed into Pakistan's nascent technology sector during 2021 than in the previous six years combined. , Bloomberg

(Bloomberg) -- In early July, things looked rosy at Airlift Technologies Pvt. as it prepared to raise more cash for expansion. Six days later, the startup -- one of Pakistan’s most prominent -- was bust.

The e-commerce company collapsed less than a week after failing to complete a funding round, underscoring how severely the global rout in tech valuations is affecting fragile startups in emerging markets. Airlift had raised $85 million a year earlier -- a record for the country -- and had curbed spending in a bid to appeal to investors as it worked toward a fresh round. But then the lead backer pulled its commitment, leaving Airlift with no capital to continue and forcing it to abruptly shut down.

“The entire team, including myself, was taken by surprise when the round fell apart at the final moment,” co-founder Usman Gul said in an interview. “Airlift was not prepared for the shift in sentiment in capital markets.”

Healthy growth and progress toward profitability wasn’t enough to convince investors spooked by a global economic slowdown and slumping tech stocks. Airlift joins a slew of startups in Pakistan and neighboring India that have hit a wall as venture capitalists curb investing in the region in favor of countries and industries they consider less risky.

Gul, 33, said one of Airlift’s mistakes was not to raise more funds last year, when the markets were more favorable. This year, investors’ attention has turned from growth toward earnings potential, bringing startups’ business models under more intense scrutiny. As Airlift prepared for it latest fundraising effort, it let go a third of its employees, reduced the target size of the round and lowered its valuation.

The company appeared to have the commitments it needed as it sent the final documents to investors on July 5. But just two days later, things took a turn for the worse. The lead backer delayed sending the money, wanting more investors to wire funds together with it, Gul said, without revealing the main investor’s name. The other investors asked for two to three months, citing fears of a global recession and downturn in capital markets. Less than a week into the negotiations, Airlift’s coffers had dried up and the company had no option but to wind down its business.

Gul praised the support it received from its early backers, but said their relatively small size didn’t allow them to invest as much as Airlift required to keep fueling its growth. The company had commitments from previous investors First Round Capital, Indus Valley Capital, Buckley Ventures, 20VC and others for the latest round before it fell apart.

Airlift helped shine a spotlight on Pakistan with its record funding round that stood out during what turned to be a breakout year for the South Asian nation’s startups -- they raised a record of more than $350 million during 2021. But the pace of fundraising has slowed since, prompting companies to put the brakes on their expansion plans. Vitol-backed VavaCars has exited Pakistan, Dubai-based Swvl Holdings has paused daily rides in the country and Uber Technologies Inc. unit Careem Inc. has halted its food-delivery business. In India, shares of Zomato Ltd. and Paytm have plunged since their market debuts last year and even the country’s most valuable startup Byju’s has struggled to raise more funds.

Airlift started by operating vans and small buses used by office workers and students. When that business slowed during the pandemic, the company pivoted to quick commerce. Before its demise, the startup deployed about $85 million over 18 months to set up more than 70 warehouses in Pakistan, expand in South Africa, and add visibility through marketing spending. As it worked toward the last fundraising effort, the company had reduced its cash burn by 66% and was about three months away from operating profitability and about six to nine months from company-level profitability, according to Gul.

“We intend to learn from this experience,” Gul said. “Market turnarounds are a reality that require better planning and preparation on our end.”