The boss of AMC Entertainment Holdings Inc., Adam Aron, gained an unexpected ally in his pandemic mission to keep his movie theaters afloat: a devoted army of retail investors who’d like nothing better than to inflict big losses on short-sellers betting against the debt-laden cinema chain.

Redditors have helped push the shares up 1,100 per cent since the start of the year, allowing AMC to cheaply issue gobs of new stock to help repair its finances. No wonder Aron has gone out of his way to charm the more than three million individual investors who now together own a majority of the company.

An ability to corral neophyte investors has become an essential skill in the memestock era. Tesla Inc. boss and Dogecoin promoter Elon Musk has shown the way in co-opting retail money to his advantage.

Aron’s interests and those of individual shareholders are closely aligned for now. Yet by courting such an amorphous and volatile crowd, the AMC boss is playing with fire. Even for those familiar with the GameStop Corp. phenomenon, AMC’s resurrection makes little intuitive sense.

This well-organized bunch of retail investors, who style themselves “the apes” (a reference to the “apes strong together” line from “Rise of the Planet of the Apes”), have boosted the stock far above a level that could possibly be justified by financial fundamentals.

AMC’s market capitalization has reached almost US$13 billion, or more than three times its pre-pandemic peak. While customers have begun returning to movie theaters, AMC carries more than US$5 billion of debt, owes hundreds of millions in unpaid rent and still burns heaps of cash. As my colleague Tara Lachapelle notes, the long-term outlook for cinemas has been clouded by people streaming content at home. 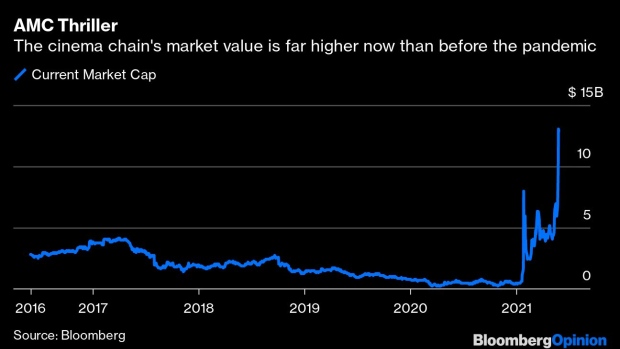 Tales of overcoming adversity are popular at the box office and they appeal to Aron’s dramatic sense of duty. He quoted British wartime leader Winston Churchill’s “we shall fight on the beaches” speech when addressing investors last year.

During a recent earnings call he heaped praise on AMC’s “passionate” retail investors. “I work for them,” he emphasized. In a nod to his anointment by Redditors as their “Silverback,” Aron announced US$100,000 in donations to a gorilla-protection charity.

He’s also channeled memestock merriment on his Twitter feed. Highlights include video of an aircraft flying the message “AMC to the Moon” over Manhattan and a photoshopped “Gorillas in the Mist” movie poster with Aron in the starring role. This is what’s expected of a public company CEO nowadays...

The creativity in this community continues to amaze me. pic.twitter.com/x4jowrRqqe

AMC’s chief has benefited personally from the Reddit hype. When the stock first took off in January, it triggered a payout under the executive incentive plan. According to this proxy filing, he was awarded an additional 500,000 shares, worth US$13 million at current prices. The board had lowered the plan’s share-price hurdles last year, thinking the old ones would be impossible to reach. Redditors made that decision look premature.

The main advantage for AMC though has been the ability to cheaply issue new stock, which proved vital in averting financial collapse. In total AMC has raised well over US$1 billion via “at-the-market” offerings since the start of 2020. Of that, some US$428 million was raised since the end of April at an average of almost US$10 a share, five times the January low. It raised another US$230.5 million on Tuesday via the sale of 8.5 million shares to Mudrick Capital Management.

But Aron has learned the perils of displeasing his new investors. In April, AMC sought permission to issue as many as 500 million new shares — money that might have been used to pay off some debt or compensate landlords for monies owed. The move could have doubled the already elevated share count, and shareholders rebelled. At first Aron promised not to use any of those new shares in 2021, and then abandoned the proposal altogether.

The company now plans to seek permission for a “significantly smaller” volume of share issuance at its next annual investor meeting, according to this updated financial filing.

He again sounded a bit out of tune with his new day-trader fan base during a recent interview with Trey’s Trades, a YouTube channel that champions their cause. Aron said he wanted to “help drive up the value of the AMC share price, over time, the right way, slowly and by building value, by growing the company [and] by delivering earnings over the long haul.”

That doesn’t jibe with how AMC’s shares are trading. An average US$18 billion of AMC stock changed hands daily at the end of last week. Those volumes are indicative of investors trading in and out of the stock and chasing momentum, not long-term value. Large purchases of bullish call options by individual investors may have forced the price higher by creating a feedback loop of additional share buying from dealers.

I’ve no doubt many retail shareholders genuinely want AMC to thrive, but those buying at these elevated levels risk being left holding the bag when the next exciting thing comes along. It’s no coincidence that memestocks took off again just when cryptocurrencies hit a rough patch.

If the retail romance does ebb, AMC’s ability to keep issuing more shares to continue repairing its finances would be impaired.

Thankfully, AMC is no longer in imminent danger of running out of cash. That, in itself, is remarkable. For better and worse, though, Aron has hitched the company’s fate to the whims of the Reddit crowd. He can’t afford to disappoint them.