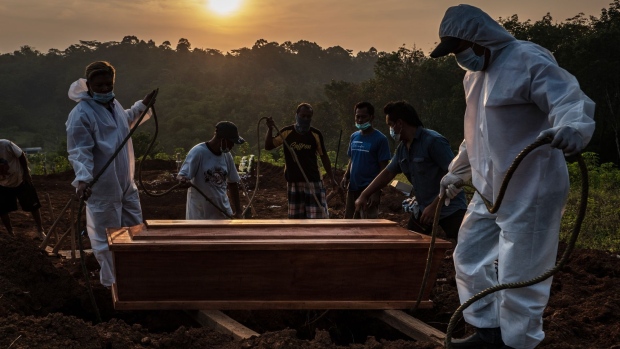 (Bloomberg) -- When Indonesian President Joko Widodo spoke with influential business groups on June 30 to discuss imposing a full-scale lockdown as Covid-19 cases spiked, he was met with widespread resistance.

Earlier in the day, senior ministers including Indonesia’s top health official visited the presidential palace in Jakarta with a clear message: the caseload — and death toll — would spike dramatically if the government didn’t immediately impose sweeping measures. They called on the president, known as Jokowi, to restrict the movement of all people in the hardest hit areas, according to a person familiar with the meetings who asked not to be identified discussing private conversations.

At the time it was evident things were getting bad: Some 24 hours earlier the Indonesian Red Cross issued an appeal for urgent care, saying one of its hospitals was “overflowing” and the delta variant was driving Southeast Asia’s biggest economy “closer to the edge of a Covid-19 catastrophe.”

But in a Zoom call with the president later on June 30, the business associations pushed back against the recommendations from health experts, the person said. Led by Rosan Roeslani, who until a few weeks ago was chairman of the Indonesia Business Chamber of Commerce and Industry, known as Kadin, various speakers said the measures would stifle the country’s economic recovery and force massive layoffs.

After that July 1 announcement, Indonesia became the new virus epicenter in Asia. Daily infections more than doubled to surpass India’s Covid-19 case numbers before peaking last weekend, and World Health Organization data shows Indonesia is now reporting more deaths each day than any country across the globe. With hospitals overwhelmed, patients being turned away and only 6% of its 270 million population fully vaccinated, Indonesia is bracing for the worst.

Jokowi now faces a choice: Stick with the limited measures announced or ease the restrictions in a bid to protect the livelihoods of millions even as the virus runs rampant. This week one of his ministers said the current restrictions would be extended until July 25, with the president saying curbs would be loosened afterward if cases continue to fall.

“There is reluctance to take the bitter pill of restricting business,” said Achmad Sukarsono, associate director and lead analyst for Indonesia at Control Risks. “Indonesia is not using health specific considerations as the main reasoning behind their policies. It’s more economic survival, and that comes from a lot of demand from people around the president, many of whom have businesses or are tied to businesses.”

On Wednesday, Arsjad Rasjid, Kadin’s new chairman who succeeded Roeslani, released recommendations for the government from 11 business groups that included calls for essential industries to fully operate, non-essential sectors to open at half-capacity, and aid for both workers and businesses. He also confirmed he attended the June 30 meeting with Jokowi.

“Please don’t take decisions that kill business or the economy because it will be very costly and dangerous for our social life,” Rasjid, the president director of listed firm PT Indika Energy Tbk told reporters at a briefing in Jakarta. “We understand that health is very important but we can’t stop the economy totally.”

The push-and-pull between the president and industry groups shows the sway business interests hold over politicians in Jakarta — particularly when they warn of job losses that could backfire during elections. During a previous Covid wave in January, Jokowi also resisted strict curbs adopted by other countries in favor of so-called micro-restrictions that prevented local governments from imposing broader measures.

Indonesia is home to more than 70 million informal workers, many of them in services most affected by tighter curbs. The pandemic had already dragged as many as 2.75 million Indonesians below the poverty line as of last September and cost 1.6 million people their jobs, according to government data. Earlier this month, Indonesia lost its prized upper middle-income classification from the World Bank after only a year.

Other developing countries like Brazil, Malaysia and Thailand have likewise grappled with the impossible choice between keeping the economy open enough to protect livelihoods, and strict lockdowns to keep the pandemic from spiraling out of control. Few can afford the kind of fiscal support to cushion the blow to businesses from strict social distancing rules, unlike smaller and wealthier jurisdictions like neighboring Singapore.

Although the government in January increased its 2021 economic recovery budget by 49% compared with earlier estimates, growth could slow to around 4% this quarter if Jokowi fails to halt the sharp increase in Covid-19 cases. That risks delaying key reform proposals including a finance and tax reform package meant to overhaul the central bank’s charter.

“Of course the impact could be huge,” said Marcus Mietzner, an associate professor at the Australian National University, who has written extensively on Indonesian politics. “The country has now seen four successive quarters of economic contraction, and the current spike in cases will prolong the crisis.”

The increasingly desperate situation is starting to affect Jokowi’s popularity, which overall still remains relatively high. A poll released Monday from Lembaga Survei Indonesia shows his approval rate dropping to 59.6% on June 21 from 68.9% in December. The hashtag calling for his resignation, #BapakPresidenMenyerahlah or “just give up, Mr. President,” has trended on social media.

A former furniture maker of humble origins, the president known as Jokowi rose to power as an outsider in a political system dominated by the business elite. From the outset, he staked his legacy on an ambitious economic reform agenda backed by a $412 billion infrastructure plan, and built a powerful coalition in parliament to implement it. He also tapped the scions of billionaires as special staff members while appointing former election rivals and the biggest shareholders of local tech unicorns to his cabinet.

Until recently Jokowi’s broad-based, business-friendly approach had proved popular among the public and allowed him to push through difficult reforms, including a landmark labor law that eased restrictions on companies in October when Covid-19 infections began sweeping the country. But it’s starting to look more like a liability with the latest Covid surge, particularly with former business executives in key posts.

Last week, a public backlash prompted Jokowi to cancel a plan by a state-owned pharmaceutical company to sell vaccines for a profit that were leftover from a Kadin-organized campaign to get employees at top businesses inoculated sooner. Since Indonesia offers free Covid-19 vaccines through a public program, anger grew that richer citizens could jump the queue for a shot.

It’s surprising that Jokowi’s approval ratings haven’t taken more of a hit given the country’s “slow and haphazard” pandemic “made worse by the premature opening of a ‘new normal’ which prioritized economic recovery and led to difficulties in the mitigation of the health crisis,” said Deasy Simandjuntak, an associate fellow at ISEAS–Yusof Ishak Institute in Singapore.

“Yet with the current upsurge of cases, it is likely that the president’s popularity will be impacted,” she said. “Especially if the present measures fail to improve the situation.”