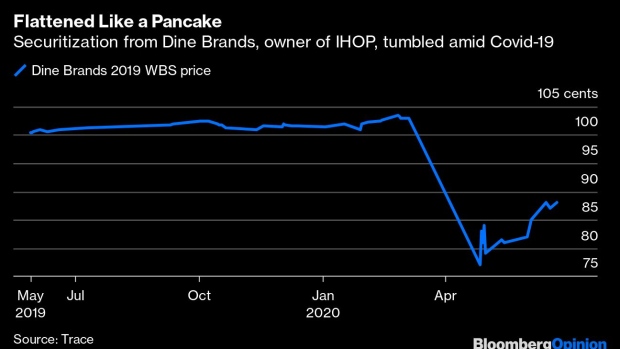 (Bloomberg Opinion) -- It looked like the perfect feat of Wall Street ingenuity. Then the coronavirus pandemic struck.

For the past few years, asset-backed securities known as “whole business securitizations” had become a steadily growing presence in the structured-finance market. Chain restaurants like Dunkin’, Hooters, TGI Friday’s and Wendy’s were among the first to take up bankers on this process, which involves companies selling almost all revenue-generating assets into bankruptcy-remote, special-purpose entities in exchange for investment-grade credit ratings and much cheaper financing. More recently, other franchise-focused enterprises like Planet Fitness Inc. and Massage Envy LLC followed.

There’s a lot to like about these securities for fixed-income investors. They usually offer higher yields than comparably rated corporate bonds, for one. They’re backed by cash flow from hundreds, if not thousands, of individual locations across the country that each have unique demand dynamics and would likely keep operating and sending money to investors even if the parent company filed for bankruptcy.

You might be able to guess where the story goes from here. Yes, some securitizations are doing fine, like Domino’s Pizza Inc., whose stock price reached a record this month. And Driven Brands, which has more than 3,200 automotive services shops across 49 U.S. states and all Canadian provinces, successfully priced $175 million of debt on Friday in the first such deal since March. But a handful of the bonds are showing signs of cracking under pressure from Covid-19. Specifically, restaurants that are overwhelmingly dine-in or concentrated in malls, as well as the aforementioned Planet Fitness and Massage Envy.

Consider Dine Brands Global Inc., the parent of the Applebee’s and IHOP brands. Obviously, it’s hardly a boom time for going out for breakfast. Its whole-business securitization from 2019, rated triple-B by S&P Global Ratings, traded at more than 100 cents on the dollar on March 11, then tumbled to about 77 cents in April, Trace data show. While trading in this kind of debt is relatively sparse, it seems to have rebounded to 87 cents, equivalent to a yield of about 8%. The average junk bond yields 6.77%, according to a Bloomberg Barclays index.

S&P said in a report last week that it could lower the transaction’s ratings within the next three months, given the sharp drop in dine-in revenue. In a sign of how serious this is for Dine Brands, it’s waiving its right to a management fee at least through the beginning of September and has redirected the residual to pre-fund debt service, S&P said. Dine Brands also voluntarily doubled the interest reserve to $32.8 million from $16.4 million.

At least in S&P’s view, the situation is even worse for TGI Friday’s, which had already cut total restaurants to 796 in March from 894 three years earlier. In mid-May, the rating agency downgraded the chain’s 2017 notes to B+, four steps below investment grade, and said there’s a 50-50 chance it would drop it even further. “Though the pandemic has placed significant stress on the restaurant industry broadly, we believe TGIF will face near-term revenue stress that is particularly severe,” the S&P analysts wrote. They found the securitization can withstand a 43% decline in collections before experiencing an interest shortfall in the next several months. That’s a high hurdle, to be sure, but hardly impossible.

Focus Brands, the parent of popular mall chains like Auntie Anne’s, Cinnabon and Jamba, is also having a rough time. Its whole-business securitization from 2017 traded at about 93 cents on the dollar last week, implying a yield of 12% (its expected maturity is April 2021). Kroll Bond Rating Agency has said it might downgrade the transaction, along with others that combined have a $3.1 billion outstanding balance.

Planet Fitness’s whole-business securitization, which helped Guggenheim Securities win GlobalCapital’s 2019 best securitization bank of the year award, sunk to as low as 64 cents on the dollar in April, down from 103 cents previously. One of its gyms in West Virginia may have exposed more than 200 people to Covid-19, according to reports Monday. The company said the gym was closed “for an additional deep cleaning by a third party” but would quickly open again. Whether customers return just as swiftly is an open question.

If there’s one company to watch, though, it just might be Massage Envy. The private-equity-backed spa chain, which had more than 1,000 locations when it issued its whole-business securitization, was always something of an outlier, given a 60-minute wellness massage or healthy skin facial costs about $50 for members. That’s a different price point than Domino’s, Five Guys or Taco Bell. The price of its securitization fell to 73 cents on the dollar in May. Now at 82 cents, that’s still equivalent to a yield of more than 12%, a level in the corporate-bond market that would indicate distress.

It’s still quite likely that investors end up unimpaired, even in these struggling bonds. But this is certainly not what they thought they were signing up for, with plenty of competing forces now muddling the outlook. Anecdotally, I’ve made buffalo wings twice during lockdown that I’d consider better than TGI Friday’s and generally feel more adept in the kitchen than ever. I suspect others feel similarly. All else equal, how many people will want to venture out to support a dine-in chain over a small business, given all the painful stories about their struggles to make ends meet? Who exactly is eager to stroll around a shopping mall, let alone get their hands messy with a Cinnabon or Auntie Anne’s pretzel?

I try not to get too committed to any one post-coronavirus future, but at least within the whole-business securitization market, a clear dichotomy is starting to emerge that roughly aligns with common-sense expectations. If a chain delivers food to customers in the comfort of their own home or car, it’ll be fine. If it’s a ubiquitous dine-in establishment, it’s a more dicey proposition. If it’s a gym that offered free at-home classes during lockdowns, people might very well just keep doing that, or make a one-time splurge on their own equipment. And it could be a while before customers feel truly relaxed when getting a massage or facial.

That’s what this niche market is saying, at least. If investors think that assessment is out of whack, some huge yields beckon.