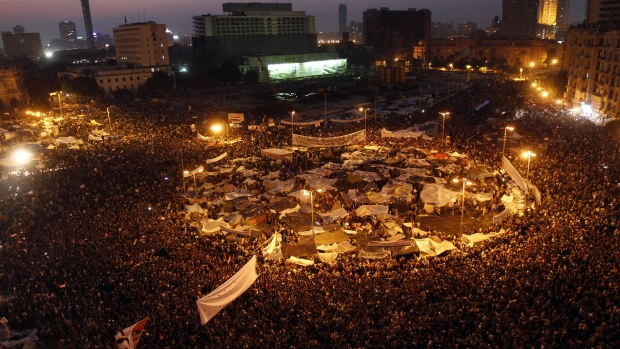 Hundreds of thousands of anti-government demonstrators crowd Cairo's Tahrir square on Feb. 8, 2011 in the largest protests since the start of a revolt against President Hosni Mubarak. , The Editors

(Bloomberg Opinion) -- It’s been 10 years since a Tunisian fruit vendor named Mohamed Bouazizi set himself alight in a protest against corruption and injustice, starting a people-power movement across the Arab world. In astonishingly little time, long-entrenched dictators were toppled in Tunisia, Egypt and Yemen; elsewhere, previously unchallenged rulers were forced to conciliate or, as in Syria, Libya and Bahrain, employ extreme violence to snuff out their people’s democratic hopes.

Unsure of whether to intervene and how to do so effectively, the West mostly looked on. President Barack Obama offered the pro-democratic protesters only modest support; European leaders, likewise. The U.S., France and Britain backed the removal of Libya’s Moammar Qaddafi with force — but their effort ended badly, and they withdrew during the chaos that followed. The aspirations of the first Arab Spring were soon crushed.

Albeit tentatively, a second Arab Spring may be beginning. In Algeria and Sudan, people have again risen to topple corrupt regimes. For all its problems, Tunisia’s newfound democracy is still in place. And warming relations between Israel and a number of Arab states afford new opportunities for constructive engagement, including trade, travel and technological cooperation.

The recent Arab-Israel accords can be counted as one of President Donald Trump’s few genuine accomplishments. President-elect Joe Biden would be wise to build on this success, while taking care to ensure that it serves the West’s broader interest in encouraging reform and prosperity across the region.

The clearest opportunity is in Sudan, one of the countries that has recognized Israel’s right to exist. Its transitional government is making remarkable progress in advancing political and social reforms but desperately needs economic assistance. Biden can make a quick, decisive difference by providing American aid, as well as by advocating forgiveness of Khartoum’s crippling, unpayable debts. He should enlist Israel’s help in these efforts.

In Algeria, Biden should work with European allies — which have closer ties to the ruling elite — to build on the democratic gains achieved by the people-power movement known as Hirak, and guard against backsliding by the old cabal of political, military and business leaders, commonly referred to as Le Pouvoir, or the Power.

Egypt poses a different challenge. Its general-turned-president, Abdel-Fattah El-Sisi, has proved even more repressive than his predecessor Hosni Mubarak, the target of the protesters 10 years ago. Biden must use American assistance, crucial for the regime’s survival, to promote democratic norms.

In Syria, Libya and Yemen, civil wars have only grown more intractable in recent years. Yet even here, there might be grounds for hope — and opportunities to help. The warring factions are exhausted and the coronavirus pandemic is adding to the ruinous cost of endless fighting. The time is ripe for new efforts to resolve those conflicts, and Biden can give the U.S. a leading role. Appointing a special envoy for this task — akin to the role Obama assigned the late Richard Holbrooke — would send a signal of intent.

The president-elect aims to restore American leadership in promoting democratic values, and he plans a “Summit of Democracies” soon after taking office. Challenging as it may be, there’d be no better way to demonstrate his sincerity than by working to support a new Arab Spring.