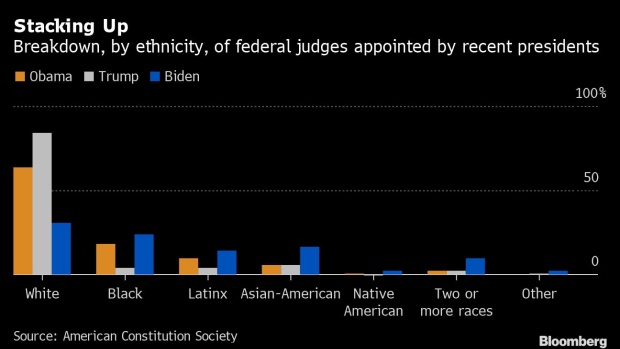 The Supreme Court building in Washington, D.C., U.S., on Friday, Oct. 1, 2021. The court in its next term that starts next Monday will consider a Mississippi case that could slash reproductive rights nationwide and even asks the justices to overturn Roe v. Wade, the 1973 ruling that legalized abortion nationwide. Photographer: Al Drago/Bloomberg , Bloomberg

(Bloomberg) -- President Joe Biden’s selection of a Black, female U.S. Supreme Court justice would make history, and the nominee would join the ranks of one of the most diverse groups of federal judges ever to make their way to the bench.

Among those who could fill the vacancy are Ketanji Brown Jackson, a former clerk of retiring Justice Stephen Breyer; Leondra Kruger, a California Supreme Court justice; and Sherrilyn Ifill, president and director-counsel of the NAACP Legal Defense Fund. Should one of them be nominated, it would be a first for the court, which didn’t get its first Black justice until Thurgood Marshall in 1967 or its first female justice until Sandra Day O’Connor in 1981. Biden said Thursday he would fulfill his promise to nominate the first Black woman to the high court. He said he would announce his choice by the end of February after reviewing candidates and their records. During his presidency, Biden has picked a number of judges who were eventually confirmed as “firsts” at their level — part of a campaign promise to diversify the courts. These include Zahid Quraishi, the first Muslim-American federal judge in the U.S., and Beth Robinson, the first out LGBTQ woman to sit on a federal circuit court.

During Biden’s presidency, 79% of the federal judges confirmed by the Senate have been women, compared to 42% and 24% under Presidents Barack Obama and Donald Trump, respectively, according to the American Constitution Society, a progressive legal organization. Of the 42 federal judges confirmed under Biden, 31% have been White, compared to 84% under Trump and 64% under Obama. These include U.S. Supreme Court justices, and those who serve on circuit and districts courts.

Here’s a deeper look at how the recent presidents compare:

Activists say tapping a Black woman as a justice is essential in a Supreme Court that has skewed increasingly conservative in recent years — and as major cases centering on issues like abortion rights and race-based college admissions are on the agenda.

“Women, people of color and LGBTQ people are underrepresented on the court. The time is now,” GLAAD President and Chief Executive Officer Sarah Kate Ellis said in a Wednesday statement calling for Biden to nominate a successor “committed to equality.”