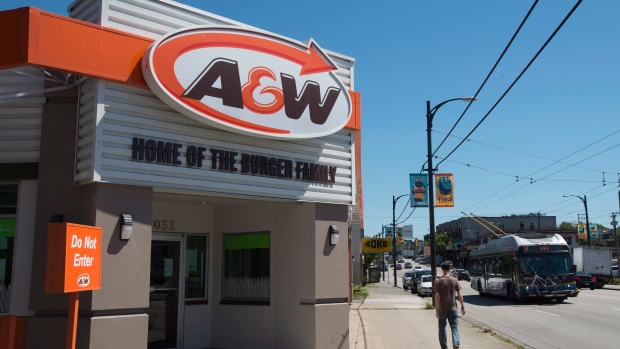 An A&W restaurant along Hastings Ave in Vancouver, B.C. , THE CANADIAN PRESS/Jonathan Hayward

TORONTO -- Bolstered by an ongoing strategy to beef up its food quality and customer experience, A&W is now expanding rapidly in Canada despite the challenging environment fast-food giants face.

While some market leaders appear to have stumbled navigating changing consumer demands for healthier foods made up of more high-quality ingredients in recent years, A&W has continued to post record strong growth, according to food analysts.

For its 2015 financial year, the fast-food operator reported same-store sales growth -- a key metric that measures sales at restaurants open for more than a year -- of nearly eight per cent, said Elizabeth Johnston, equity research associate for Laurentian Bank Securities.

That's higher than most of A&W's quick-service competition in the country, Johnston noted, which has recently ranged anywhere from negative one per cent to five per cent.

McDonald's Canada, by way of comparison, recorded several years of sliding sales figures and operating profits before marginally beginning to post improvements in 2016, according to estimates by industry research firm IBISWorld's April report on the Canadian fast-food restaurant industry.

A&W, however, has been ahead of the curve by incorporating higher quality ingredients in its food, said IBISWorld industry analyst Andrew Alvarez, "which has helped them significantly."

In 2012, the chain started serving up beef from cows raised without the use of hormones or steroids.

The company followed that up with chicken and pork raised without the use of antibiotics, and eggs from hens fed a diet free of animal byproducts.

"These items speak to a changing demographic, a younger demographic for whom this quality is a focus," said Johnston. "Maybe they don't eat quick service or fast food all the time, but when they do they're making a choice to eat at A&W."

The chain's strong sales have also been boosted by significant expansion, added Alvarez.

Since A&W opened its first restaurant in Winnipeg in 1956, it's grown to 858 Canadian locations as of June 19, according to its first quarter report for the 2016 financial year. A&W plans to expand by an additional 300 joints over the next five to seven years.

This puts the chain in the position where they would be or could be the most convenient choice for consumers in a given area, Alvarez said, resulting in more new customers.

A&W president Susan Senecal said the company has been focused on expanding in markets where it lacked a sufficient footprint, like Ontario and Quebec where it's made great progress and attracted new customers.

Johnston suggests its focus on guest experience helps their returns as well. Each store hosts a kiosk where patrons can rate their satisfaction, she said.

While shifting to additive-free ingredients and opening more stores may seem like simple changes any chain could undertake, it's not that easy, said Alvarez.

"It wouldn't necessarily translate into higher sales, without the demand already there. A&W has managed to capture consumer loyalty and its expansion is now satisfying demand."

The question, Alvarez added, becomes whether or not it can keep that momentum going.

"Usually these things slow down once they reach saturation ... It doesn't seem like A&W has hit that point yet."