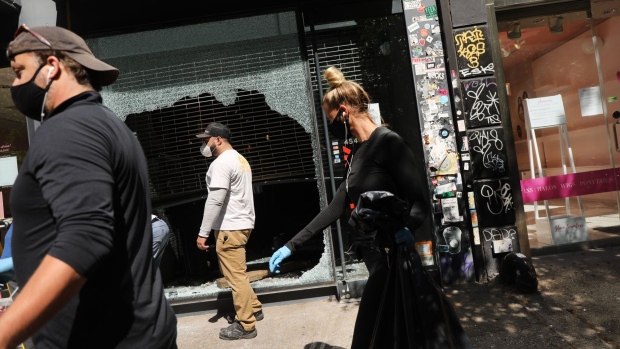 NEW YORK, NEW YORK - JUNE 01: Following a night of protests, people clean up in Manhattan’s SoHo neighborhood which saw numerous store windows broken and merchandise stolen on June 01, 2020 in New York City. Thousands of protesters took to the streets throughout the city to continue to show anger at Minneapolis Police officer Derek Chauvin who was filmed kneeling on George Floyd's neck before he was later pronounced dead at a local hospital. Floyd's death, the most recent in a series of deaths of black Americans while in police custody, has set off days and nights of protests across the country. (Photo by Spencer Platt/Getty Images) , Photographer: Spencer Platt/Getty Images North America

(Bloomberg Opinion) -- One of the more popular sentiments expressed on Twitter over the weekend was that the astronauts who left Earth on Saturday made a good choice. After months of suffering from a global pandemic that has caused mass unemployment, school shutdowns and over 100,000 deaths, Americans are now reeling from a wave of nationwide protests following the death of a black man at the hands of Minneapolis police. What should companies say and do amid events so fraught that many people would prefer not to be on the planet?

“It’s always risky for brands to weigh in on deep social unrest,” says reputation-management guru Helio Fred Garcia, president of Logos Consulting Group. Companies have learned this the hard way before — such as when Starbucks Corp. hatched an ill-advised effort to encourage people to talk about racism with their baristas in 2015 and when PepsiCo. Inc. launched a widely excoriated commercial about social activism featuring Kendall Jenner in 2017. Companies were reminded of that risk again on Saturday after National Football League Commissioner Roger Goodell received fierce backlash for expressing support for the protesters. His statement was viewed as insincere by many after the experience of Colin Kaepernick, a player who has not been signed by a team since 2017 after protesting racism and police brutality.

So companies can start by taking a look in the mirror. Facebook Inc., for example, needs to do some hard thinking about its policies after choosing not to flag a Facebook version of a Twitter post by President Donald Trump threatening to shoot looters. That decision has staffers so upset that some staged a virtual walkout Monday. (Chief Executive Officer Mark Zuckerberg acknowledged in a post that his company must do more to “ensure our systems don't amplify bias.”) Companies should be prepared to answer questions — from employees, the news media and other stakeholders — about how they can do more to fight racism and promote diversity.

Leaders should also communicate with employees who are on edge, seeking their feedback on how they can better promote diversity, address employee concerns, and fight unconscious bias and other forms of racism. But while every organization should be having these conversations internally, companies should proceed cautiously before publicly wading into the protests.

Speaking out publicly comes with two risks. The first is that such efforts will be perceived as self-serving. Many television commercials referencing the coronavirus, for example, have been panned as thinly veiled efforts to use the pandemic to promote consumer spending. The second risk is that commercials or other statements of public support will only remind the public of a company’s record of inaction (the Pepsi commercial) or dubious actions (the NFL).

Indeed, a 2016 study by Weber Shandwick and KRC Research found that public activism boosts a company's reputation when it is related in some way to what a company is already doing — but it backfires when it is perceived as discordant with a company's business.

If a company has a well-established record of openly fighting racism, speaking out publicly now will be perceived as credible. And if a company — or its employees or stakeholders — has been drawn into the fray, the public will expect it to say something. Garcia notes that companies whose stores have been damaged in the protests will be expected to respond. Macy’s Inc.’s flagship store in New York’s Herald Square was looted Monday night, and the company would be wise to respond compassionately. Designer Marc Jacobs offered a laudable example for other retailers to follow after one of his own stores was damaged:

Of course, many other executives will be tempted to join the bandwagon to express support for fighting systemic racism. But they should start by taking action. Companies including Verizon Communications Inc., Intel Corp., Facebook, Peloton Cycle Inc. and Levi Strauss & Co. have all announced major monetary contributions to organizations that promote social justice. Such donations — along with changes to corporate practices — are the place to start.Once an organization has firmly established a record of supporting racial equality, it can authentically join the public conversation. But without such actions, attempts to generate positive publicity by tying corporations to the cause will be more likely to be perceived as shallow and self-serving, generating backlash that may leave more chief executives wanting to leave the planet.

Kara Alaimo is an associate professor of public relations at Hofstra University and author of “Pitch, Tweet, or Engage on the Street: How to Practice Global Public Relations and Strategic Communication.” She previously served in the Obama administration.