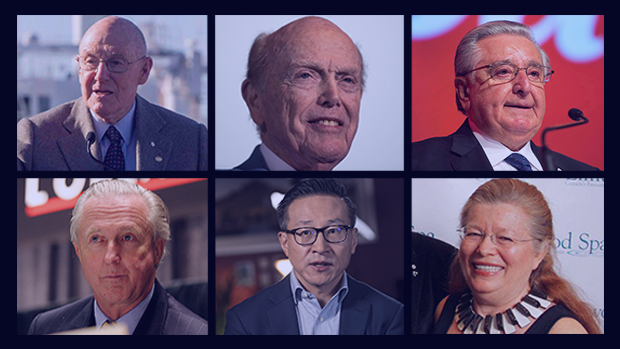 Canadian billionaire power couple Gerry Schwartz and Heather Reisman recently announced they were donating $100 million to the University of Toronto, marking the largest gift in the school’s history.

BNN Bloomberg took a look at how other Canadian billionaires acquired their wealth, and where they have put their money.

Estimated net worth: US$11 billion

Tsai, who was born in Taiwan but holds a Canadian passport, is the vice chairman and co-founder of Alibaba Group Holding Ltd. Most of Tsai’s wealth comes from his 2.1 per cent stake in the Chinese e-commerce giant, which has a market capitalization of about US$461 billion, according to Bloomberg. In 2018, Tsai acquired a 49 per cent stake in the Brooklyn Nets NBA team from Russian billionaire Mikhail Prokhorov in a sale valued at $2.3 billion. Tsai also owns the San Diego Seals, a box lacrosse team. In 2016, he made a $30-million donation to the China Centre at Yale Law School, his alma mater.

Estimated net worth: US$8 billion

Brydson is Canada’s wealthiest woman and is the granddaughter of Roy Thomson, the founder of The Thomson Corporation, which merged with Reuters Group Plc in 2008 to become media giant Thomson Reuters Corp. Brydson is the largest shareholder in Woodbridge – the private holding firm that controls Thomson Reuters – with an estimated 23 per cent stake, according to Bloomberg. Through her investment company Westerkirk Capital Inc., Brysdon has developed hotels with Marriott Corp. in Nova Scotia and owns broadcasting company Vista Radio Ltd. and aircraft manufacturer Viking Air. She also owns Elmwood Spa in downtown Toronto and a Thai restaurant called Bangkok Garden, which is in the same building as the spa. Through the Irma J. Brydson foundation, Brydson has donated to the Toronto YWCA and other social institutions in Canada.

Estimated net worth: US$7.4 billion

Most of Weston's fortune comes from George Weston, which owns the biggest stake in Loblaw Co. Ltd. Weston, who was born in the U.K., also owns stakes in London-based department stores Fortnum & Mason and controls Selfridges, which is the parent of Canada’s Holt Renfrew. The 78-year-old also lays claim to a three per cent stake in British food retailer and processing company Associated British Foods. Weston is known for his work as chairman of the W. Garfield Weston Foundation, which helps fund scholarships, neuroscience, conservation and scientific research in Canada’s north.

Estimated net worth: US$6.5 billion

Pattison, the country’s third-richest man, has amassed most of his wealth through his company Jim Pattison Group, which owns everything from Western Canada’s largest car dealer, to the Ripley’s Believe It or Not franchise, to the popular canned seafood label Ocean Brands. One of his biggest stakes in an outside company is Westshore Terminals Investment Corp., North America’s biggest coal export facility, and his biggest public holding is a controlling stake in Canfor Corp., according to his company’s website. Pattison has donated millions of dollars of his wealth, mostly to hospitals. The Jim Pattison Foundation made a record $75 million donation to St. Paul’s Foundation in B.C. in 2017. That same year the foundation donated $50 million to Saskatoon’s new Children's Hospital of Saskatchewan, which has since been renamed the Jim Pattison Children’s Hospital.

Estimated net worth: US$5.7 billion

Irving owns Irving Oil Ltd., which operates Canada’s largest oil refinery in Saint John, N.B. Irving Oil owns more than 900 gas stations in eastern Canada and the northeast U.S. and operates Ireland's only oil refinery in County Cork. In 2016, Irving, along with his wife and daughter, donated $80 million to Dartmouth College in the U.S. to set up the Arthur L. Irving Institute for Energy and Society, which researches energy issues. Irving is an honorary director of Ducks Unlimited Canada, which works to preserve wetlands in Canada. Irving Oil has given millions of dollars to the organization.

Lino is a former chief executive officer of Saputo Inc., Canada’s largest cheesemaker, which was founded by his father. Saputo owns shares of the cheesemaker through private holding firm Jolina Capital Inc., which owns 33 per cent of the company, according to a 2019 financial fact sheet. Saputo has collected more than $1 billion in stock sales and dividends from the cheese company since 1993, according to Bloomberg, and made more than $250 million between 2004 and 2014 by selling shares in Canadian transport company TransForce. In 2018, Saputo and his wife Mirella made a $1-million donation to the Canadian Museum of Immigration in honour of their arrival to Canada from Sicily. Saputo is also known for investing in sectors such as real estate, forestry, and transport through Jolina, and his family notably donated $7.5 million to construct the Saputo Stadium at Olympic Park in Montreal over a decade ago.