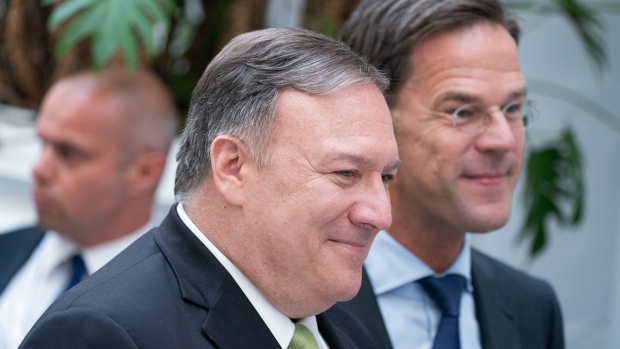 Mike Pompeo, with Mark Rutte, in The Hague, Netherlands, in June, 2019. , Bloomberg

(Bloomberg) -- When the Dutch government invested in home-grown chipmaker Smart Photonics this summer, it was a departure for a country with a hands-off approach to business.

A small company with big plans, Smart Photonics was struggling to attract financing to scale up production of its next-generation chips, whose applications include self-driving cars and datacenters.

“We flew all over the world to talk to interested investors,” Luc Augustin, Smart’s chief technology officer, said in an interview at the company’s offices outside Eindhoven, in the southern Netherlands. “The most serious interest came from Asia,” specifically Japan, Singapore, Taiwan and from China, he said.

In late June, just as it looked like Smart Photonics was about to be lured to Asia, the Dutch government stepped in with 20 million euros ($23.7 million). A similar sum came from a consortium including a government-backed agency, PhotonDelta, whose chief executive, Ewit Roos, raised the alarm at the Ministry of Economic Affairs as soon as he learned of the company’s predicament. “The government acted swiftly and decisively,” Roos said by phone.

The Dutch government says that its decision was taken to retain key technology and wasn’t driven by concerns over China. Even so, its investment was just the latest example of a more defensive economic stance that has accompanied a hardening of the country’s attitude to Beijing.

The shift has “been very noticeable, because the Netherlands has always been that kind of small, open, free-market economy that wanted nothing to be touched and everything to be open,” said Agatha Kratz, an associate director at Rhodium Group in Paris.

As the Trump administration targets Chinese technology companies from ZTE and Huawei to ByteDance’s TikTok, that changing Dutch outlook places the Netherlands and its high-tech companies in the middle of the geopolitical power play between Washington and Beijing.

The Dutch government last year denied an export license to ASML Holding NV for one of its extreme ultraviolet (EUV) lithography machines intended for China. The license to ship the equipment, used to fabricate cutting-edge chips, still hasn’t been granted. While that’s a decision for the government, “of course there are views in the U.S. and China whether that’s a risk,” ASML Chief Executive Officer Peter Wennink told Bloomberg Radio in January.

Chinese Foreign Minister Wang Yi stopped off in The Hague last week to meet with Dutch Prime Minister Mark Rutte, a year after U.S. Secretary of State Michael Pompeo made the same trip.

ASML is a top priority for the U.S. because of its world-leading technology, according to a person familiar with the case. Persuade the Dutch not to sell to China, and you don’t have to worry about China going elsewhere for the technology, the person said, adding that it would be very surprising if Wang hadn’t brought up ASML during his visit.

The Dutch are still highly unlikely to reverse their decision and allow the shipment, said a second person familiar with the ASML example. Both asked not to be named as the matter is private.

“The United States has confidence that the Netherlands will review the case very carefully,” the State Department said in a statement, referring to ASML.

Beijing still regards the Netherlands as an important trade partner and investment destination, even though the Netherlands is getting “harsher” toward China, said a researcher with the government-affiliated Chinese Academy of Social Sciences who asked not to be identified due to rules for speaking with media. One reason for that change is China is becoming more competitive economically with Europe, the researcher said.

Growing skepticism of China is a path already taken by countries from Australia to the U.K. -- and most aggressively pursued by the U.S. under Donald Trump. But it’s a new direction for the Netherlands, a mercantile nation founded on free trade.

The Dutch used to only care about the business opportunities, but those days are over, according to Maaike Okano-Heijmans, a senior research fellow at the Clingendael Institute in The Hague, a foreign policy think tank with ties to the government.

“China triggered this active industrial policy,” she said. “You’ll never read this in an official paper, but that is how it is, and rightly so. An economy with that magnitude in combination with their system can really affect us -- that is the crux.”

The shift only occurred in about the past 18 months, according to Okano-Heijmans. In 2015, during a trip to the Chinese city of Shenzhen, Rutte praised Huawei’s Netherlands chief as “Wonder Wang” Dexian, and urged mutual projects to exploit a shared prowess in innovation.

Now it’s crafting a foreign investment screening mechanism and has all-but ruled out the participation of Huawei in its 5G network core by barring companies that “are obligated to work with governmental organizations, especially those in charge of intelligence.”

The Netherlands is one just two European Union members -- Sweden is the other -- to have a public strategy on China. In it, the government cites assessments by the AIVD Dutch intelligence agency noting Chinese intelligence gathering on financial, economic and political subjects, as well as Beijing’s interest in Dutch companies active in the fields of high-tech systems, energy, maritime technology and life sciences and health.

Back in December 2015, the $1.8 billion sale was waived through of what is now Ampleon, a former division of Dutch chip giant NXP Semiconductors and a world leader in transistors found in transmission towers essential for 5G. The irony is that NXP sold it to China’s JAC Capital to appease the U.S. antitrust agency while buying an American company, Freescale.

The Dutch are now determined to retain an advantage in photonics -- the communication of information via light instead of electronic signals -- and its application to chips. The European Commission, the EU’s executive, has designated photonics one of six “key enabling technologies,” which receive priority research and innovation support.

It’s not the only area where the Dutch government has intervened, however. In April, it stepped in to help rescue IHC, a world leader in dredging ships -- to safeguard jobs and “ensure expertise was retained for the Netherlands,” the Economy Ministry said.

Perhaps the most dramatic incident was the theft of intellectual copyright from ASML by several former employees based in San Jose, California, who set up a competitor called XTAL in 2014. Dutch newspaper Financieele Dagblad reported last year that they were Chinese spies with links to the ministry of science and technology in Beijing. ASML’s Wennink, while saying some of those involved “happened to be Chinese nationals,” denied that the company had been subject to Chinese espionage.

The case, which only came to light in April last year when ASML was awarded compensation of $845 million by a California court, caused an uproar in the Dutch parliament, since it coincided with drafting of the China strategy, which was published the following month. In June, Pompeo was in the Netherlands ahead of a visit to Washington by Rutte later that summer. Shortly after, the Dutch government refused ASML’s export license.

For Kratz at Rhodium, the Dutch have been made “very aware of some of the more strategic or national security issues of dealing with China.”

The government “wants to grasp chances when they occur,” said the Economy Ministry, “but will also go on the defense when necessary.”