After more than half a century in the energy business, 80-year-old billionaire Clayton Riddell has just cemented his legacy among the great Canadian oil and gas tycoons.

Paramount Resources, the Calgary-based company he founded nearly four decades ago, announced late Thursday it would spend nearly $460 million in cash acquiring assets from Apache as the international energy player completed its Canadian exit. The company also took the wraps off an all-stock takeover of Trilogy Energy, another Calgary-based oil and gas producer controlled by the Riddell clan. Clayton’s son, Jim Riddell, is CEO of both Paramount and Trilogy.

“I don’t think I’ve ever thought about legacy,” Riddell told BNN in a May 18 interview, the day he was formally inducted into the Canadian Business Hall of Fame. “It’s been a fun journey. And I sort of hope the journey is not quite over.”

The journey for Riddell’s empire through what has been the most devastating price crash to beset the Canadian oil and gas industry in a generation has not been an easy one. In 2015, Paramount was forced to sell what one analyst described as its “crown jewel” natural gas asset in northwestern Alberta for $1.9 billion in order to pay down a hefty debt load. The company’s share price had been cut in half over the course of the previous year, and many analysts were concerned for its survival at the time.

Riddell has founded 10 energy companies over the course of his career and – much like fellow Canadian energy mogul Murray Edwards – has also tied himself to another Calgary institution via his partial ownership of the Calgary Flames NHL franchise.

“I always tell people that I started several small oil companies because I wasn’t smart enough to run a big one,” Riddell told BNN in May.

Humility aside, he will have no choice after the Apache deal closes.

Paramount and Trilogy have a combined market value of roughly $2.6 billion. Assuming the $459.5 million paid for the Apache assets adds an equivalent amount to the market cap, Clayton Riddell will chair a company run by his son Jim that is worth more than $3 billion.

Then there is the rest of the family. Clayton’s daughter Susan Riddell Rose is CEO of Perpetual Energy, which had a market value north of $1.5 billion back in 2014 when oil prices were still in the triple digits --  though it was hit especially hard by the crash in crude oil prices and is currently worth slightly more than $85 million. Her husband Michael Rose is CEO of Tourmaline Oil with a market value above $7 billion; although it was worth double that figure in 2014.

In a sign of his immense influence on the Canadian oil and gas industry, Riddell’s decision to purchase assets from Apache is already being interpreted as a broader sign of optimism returning to the sector. Speaking to BNN from the Calgary Stampede parade grounds on Friday, GMP FirstEnergy Chairman Jim Davidson called Clay Riddell “one of the best investors in the energy patch of all time.”

“The fact that he is making a transaction of this size and of this magnitude and at this point in time has some significance for me,” Davidson said. “To me you could use it as a reason to suggest that we are very close to the bottom of this market.”

The empire Clayton Riddell has built is now set up to survive well beyond his own lifetime. His grandson – Jim’s son Tyson – recently earned a Petroleum Engineering degree from the University of Wyoming and has twice worked as a summer student for Calgary-based Pembina Pipeline. The younger Riddell appears to share the family interests; from spending his summers as a teenager cleaning golf clubs to tweeting regularly about hockey and hockey-related pranks.

“We’re looking at at least one more generation trying it out,” Clayton Riddell told BNN in May. “We’re hoping that it will stay in the family and be part of the Canadian landscape for a while.” 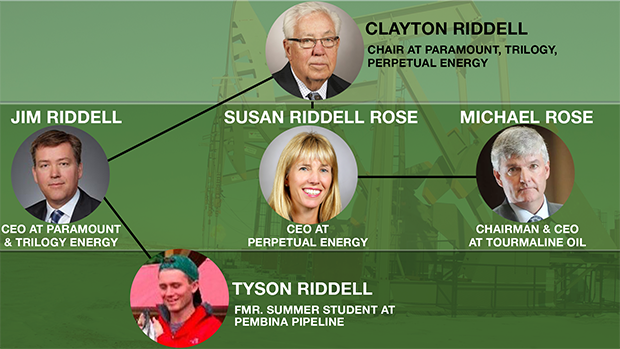