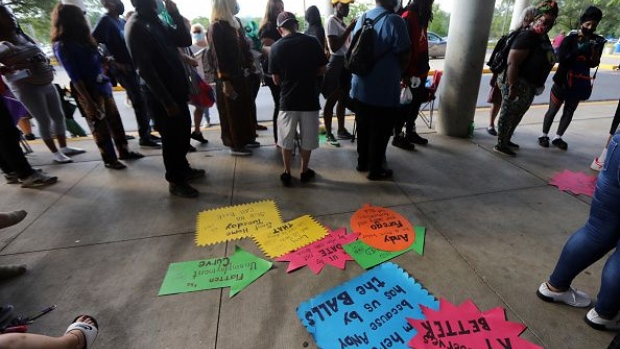 (Bloomberg Opinion) -- To help fight the Pandemic Recession, Congress temporarily made unemployment benefits more generous. Too generous, in fact. Eligible workers can receive $600 per week from the federal government on top of their regular state-provided benefit.

This program expires at the end of July. What should Congress do?

It would be a mistake to continue the benefit in its current form. But it would also be wrong to let expanded unemployment checks expire completely, in part because U.S. cases of coronavirus are rising, and some states are reinstituting social-distancing measures.

The $600 weekly payments were approved as part of the $2 trillion Cares Act, which was passed on March 27 to help support the economy during the Covid-19 disaster. They have been controversial from the start.

Standard state unemployment benefits averaged $321 across the nation in May. The $600 federal supplement brought total benefits up to $921 per week on average, or nearly $50,000 on an annual basis. Economists Peter Ganong, Pascal Noel and Joseph Vavra estimate that 68% of unemployed workers who are eligible for payments saw their income go up relative to what they were making while employed. For one out of five unemployed workers, the benefits were twice as large as previous earnings.

Taxpayer dollars shouldn’t be used to raise the incomes of the majority of unemployed workers above what they were earning on the job. That said, benefits this generous did much less damage to the economy during the shutdown than they would under normal circumstances. Unemployed workers weren’t discouraged from getting new jobs because there weren’t new jobs to get.

And because workers had income support from the government when stores and restaurants began to reopen, consumer spending roared back in May, increasing by 8.1% over the previous month, an extraordinary jump. The personal savings rate in May was a stunning 23.2%. Economists Jeehoon Han, Bruce D. Meyer and James X. Sullivan find that government programs during the Pandemic Recession actually lowered the poverty rate by 21%.

The situation is different now that the economy has partially reopened. But letting the supplemental federal benefit abruptly expire would reduce overall income in the ballpark of $50 billion per month, by my back-of-the-envelope calculations. This would depress overall consumer spending by several hundred billion dollars in the second half of 2020, which by itself could cause a recession-level contraction in economic output.

And the pandemic isn’t petering out. On the contrary, a new wave of coronavirus infections is ripping through the South and West. Texas’s and Florida’s reopenings are moving backward, with the states closing bars and taking other steps to slow the spread of the virus.

But the payments can be scaled back. The CBO estimates that if the $600 supplement were to continue for six additional months, roughly five out of every six recipients would have higher incomes from unemployment benefits than they could earn from working.

This would keep the unemployment rate elevated at a time when it should be coming down. The CBO expects that the extra income would boost the economy during the rest of 2020, but would reduce economic output in 2021 by keeping idled workers from getting jobs.

A nice middle ground was charted recently by Jason Furman and Timothy Geithner, both senior members of the Barack Obama administration, along with George W. Bush administration economist Glenn Hubbard and University of Maryland economist Melissa S. Kearney. They argue that the amount of the supplemental payment should be determined by economic conditions in each worker’s state.

In states with the highest unemployment, the federal government would provide a maximum payment of $400 per week, on top of what the worker receives in his or her normal state benefit. As the unemployment rate falls, this extra benefit shrinks. At 7% unemployment, the supplement is eliminated.

Crucially, the economists define the federal supplement as a rate calculated against previous wages, and not as a flat dollar amount. This guarantees that workers won’t have higher incomes from unemployment benefits than they did from working.

Not all states have computer systems that are able to implement a system based on a rate rather than a flat amount. For those states, the group recommends a maximum federal supplement of $200 per week.

I would quibble with some details in the Furman, Geithner, Hubbard and Kearney proposal: $400 per week is too generous, even as a maximum payment. But the basic idea is sound, and points the way forward for Congress.

Along with these changes, Congress could help states update their unemployment insurance computer systems. States should not have to resort to providing flat-dollar benefit supplements because their IT infrastructure can’t handle anything more complicated.

In addition, Congress should continue to offer incentives to states to create and publicize work-sharing programs. Also known as “short-time compensation” programs, work sharing partially reimburses workers whose hours are cut using pro-rated unemployment benefits. As I discussed in a recent column, this allows businesses to reduce payroll costs without resorting to layoffs, knowing that their workers will be able to make up most of their lost income from unemployment insurance. Only 27 states and the District of Columbia have these programs on the books.

Given the looming expiration of supplemental unemployment benefits, Congress needs to act quickly. The recovery from the Pandemic Recession is fragile. The economy — and workers — will need a hand as we head into the fall.

Michael R. Strain is a Bloomberg Opinion columnist. He is director of economic policy studies and Arthur F. Burns Scholar in Political Economy at the American Enterprise Institute. He is the author of “The American Dream Is Not Dead: (But Populism Could Kill It).”