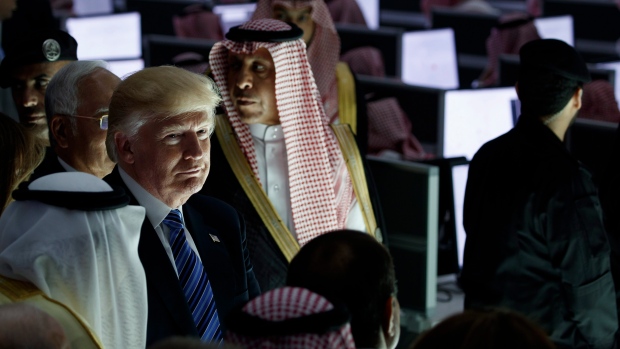 President Donald Trump listens during a ceremony to mark the opening of the Global Center for Combatting Extremist Ideology, Sunday, May 21, 2017, in Riyadh.

In the high-stakes multi-billion dollar game of poker that is the crude oil market, Donald Trump just showed his hand.

Within hours of leaving Saudi Arabia after his first official foreign visit as President of the United States, Trump made clear America has no intention of helping the Kingdom achieve its all-consuming goal of balancing the global crude oil market. In fact, by announcing his plan to boost government revenue by selling half of the U.S. Strategic Petroleum Reserve, Trump has signaled an intention to actively work against that goal. And Canada could get caught in the middle.

Since the fall of 2014, the worldwide oil market has been effectively locked in a power struggle between U.S. shale producers – rising in both output and clout – and the Organization of Petroleum Exporting Countries, which has seen its authority fall in recent years despite still controlling some 40 per cent of the world’s oil supply. Initially, the cartel attempted to flood the market in hopes of driving prices low enough to the point where OPEC’s new American rivals would be forced into bankruptcy.

When that strategy failed even with prices falling below US$30 per barrel at the start of last year, OPEC did a complete about-face and cut production in hopes of boosting prices and draining the massive global oversupply the cartel itself was largely responsible for creating. Last week, the energy ministers of Saudi Arabia and Russia – not an OPEC member but nearly tied with the Saudis for largest producer on the planet – jointly agreed to do whatever it takes to bring commercial oil inventories down to their five-year average levels.

The latest OPEC strategy, which some have suggested is in no small way related to plans for a public market debut of Saudi Aramco, is at least partially pinned on the cartel hoping the Americans would not make the oversupply problem even worse than they arguably have already.

Crude oil stockpiles across the developed world are currently about 300 million barrels above the five-year average, according to the latest inventory data from the Organization for Economic Co-operation and Development. To compare, the total U.S. Strategic Petroleum Reserve currently has nearly 688 million barrels of crude stashed in dozens of massive underground salt caverns spread across Texas and Louisiana, making it the largest such reserve on the planet.

Selling half its contents would equate to 344 million barrels of crude. While the plan would be to sell that volume over a decade, it nonetheless represents more than the current total planet-wide glut and that is sending more than a few commodity traders to the “sell” side of the market. Even though Trump’s proposal faces seemingly insurmountable hurdles before it can be implemented as policy – not the least of which being that the American law requiring the SPR to have a minimum of 450 million barrels would have to be changed – the timing of the proposal itself could not come at a more uncomfortable time for OPEC members.

As the cartel prepares to discuss the possibility of extending their supply cuts during meetings in Vienna this week, many could now rightly wonder whether a cut to their own output remains worth a corresponding short-term loss of revenue when it now appears as though clearing all the excess crude from global stockpiles could now take longer than previously expected. If OPEC does end up agreeing to extend its own cuts, the increased likelihood of a major infusion from the U.S. SPR into the market will at a minimum temper expectations of prices rising as a result.

There is an opportunity for Canada there, albeit a small one. The entire reason the U.S. SPR exists is to hedge against the risk of losing access to imports similar to what occurred during the Arab Oil Embargo of the late 1970s. Most of the crude in the SPR is the lighter, sweeter variety, which is similar to American imports from OPEC but also to the growing American output of shale oil. American refineries, however, are mostly designed to process heavier types of crude such as the output from the oil sands of northern Alberta.

That means if the U.S. does end up flooding the light oil market with SPR reserves, American refineries will still need just as much heavy crude which would support higher prices for Western Canada Select; the most common blend of heavy Canadian oil sands crude.

However, Canadian crude oil production is what industry insiders call the “marginal barrel” since it is among the most expensive oil in the world to extract despite fetching among the lowest prices. In large part for that reason, WCS always trades at a discount to the North American benchmark price of West Texas Intermediate, which absolutely would fall if doubling the global supply glut was seen as possible.

Canada is already an unwitting participant in the OPEC-led output cuts. Now this country’s energy sector must contemplate getting burned with even lower prices for the production it has left because Donald Trump just laid down his cards.