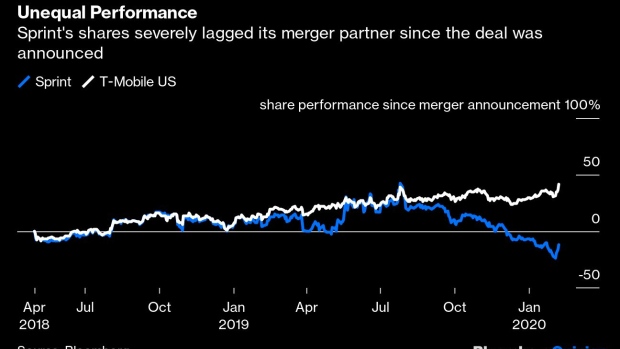 (Bloomberg Opinion) -- Is Sprint Corp. a duck or a rabbit?

Bear with us. Earlier this week, SoftBank Group Corp. founder Masayoshi Son showed investors a bemusing slide with an ambiguous image of a duck and rabbit. If you look at the picture from the right, you see a different critter than the view from the left.

In his characteristically gnomic fashion, he was trying to suggest that there were two ways of evaluating SoftBank, and investors were doing so from the wrong perspective. But the analogy could also hold true for Sprint, the U.S. carrier in which SoftBank is the biggest shareholder, and whose planned merger with rival T-Mobile US Inc. finally secured the regulatory green light on Tuesday.

When it was agreed back in April 2018, the all-stock deal gave Sprint an equity value of $27 billion. Since then, the two firms’ trajectories have diverged. Prior to Tuesday’s decision, T-Mobile stock had gained 31%, while Sprint had fallen 26%. Because Sprint shareholders are set to get T-Mobile shares in exchange for their existing stock, the value of the deal had therefore climbed to $36 billion, while the market only valued Sprint at $20 billion.

So you can see why Deutsche Telekom AG, which owns 63% of T-Mobile, is now seeking to renegotiate the terms of the deal, whose existing terms lapsed in November. It looks like it might now be overpaying, so Tim Hoettges, the German firm’s CEO, has a fiduciary duty to his shareholders to at least give it a try.

Here’s the metaphorical duck. Son is more vulnerable than he might have been just a week ago. That’s because the activist investor Elliott Management Corp. has built a stake in SoftBank, seeking governance improvements and a $20 billion buyback. SoftBank is meanwhile trying to find the capital for its new, reduced Vision Fund, the follow-up to the $100 billion pot of venture capital cash that Son used to make outsize bets on Uber Technologies Inc., WeWork parent We Co. and some 80 other firms over the past three years. The deconsolidation of Sprint reduces its debt exposure, while selling the remaining stake could free up capital to invest in the new fund or buybacks. The current deal terms value its stake at about $30 billion.

What’s more, Sprint needs the merger more than T-Mobile. The declining share price has been driven by lackluster earnings and falling subscriber numbers. In the almost two years since the deal was agreed, Sprint’s number of subscribers has fallen by 460,000 to 54 million at the end of December. T-Mobile has meanwhile added 12 million customers for a total of 86 million.

Now for the rabbit. A major renegotiation only becomes realistic if Deutsche Telekom and T-Mobile are prepared to walk away from the deal. T-Mobile stock’s 13% jump after the takeover was approved on Tuesday suggests that shareholders are happy with the deal even under the current terms. It will create value by reducing the cost of new 5G networks; giving the new company more pricing power over its customers; and letting the German-controlled firm get hold of Sprint’s valuable wireless frequencies.

Ultimately, the deal remains in both firms’ interests. Deutsche Telekom would probably prefer an expensive takeover to no deal at all. Were the terms to be reevaluated based on the diverging stock prices, then T-Mobile could expect a swap ratio of at least 12 Sprint shares for each of its own (assuming a $27 billion valuation), up from the 9.75 shares agreed two years ago. Is such a drastic change likely? No. But given SoftBank’s need for cash, there’s a good chance it will be open to concessions to get the deal done.