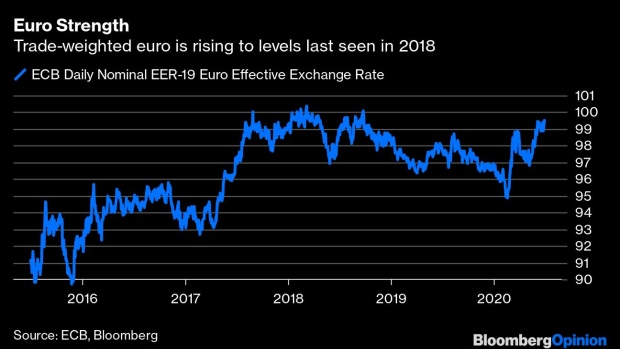 (Bloomberg Opinion) -- The euro is at its strongest level for nearly two years on the European Central bank’s own official trade-weighted index, which compares it with a basket of other leading currencies. In the past, this would have been a serious worry for the world’s largest trading bloc. The continent, with Germany at the forefront, is heavily dependent on exports.

But things are different this time. The first stage of the post-Coronavirus economic recovery will be driven by domestic consumers, rather than overseas purchasers of goods. As such, the robustness of the euro should be seen as a judgment on Europe’s relative strength compared to the U.S. and other parts of the world.

So far at least, its management of the Covid-19 crisis from a health-care perspective has been far superior to that of the Americans. And the better you manage that, the more quickly you can reopen your economy.

For once, this looks like the type of currency strength that the ECB might tolerate, if it’s a true reflection of improving domestic growth prospects.

Bloomberg Economics’ activity trackers show a deep plunge in both the U.S. and European economies during lockdowns, but the recovery has been quicker and more complete in France and Germany, the main engines of the euro zone. In mid-June, French and German economic activity was at 80%-90% of normal levels, compared with 65% in the U.S.

The EU — and the ECB — won’t want the euro to rise too fast and thereby threaten the next stage of any recovery by choking off export growth. Countries such as Italy, Spain, Greece and France will also have an eye on salvaging the summer tourist season, something that an inflated currency wouldn’t help.

One might have expected the euro to be weaker given the ECB’s massive 1.35 trillion-euro ($1.5 billion) pandemic response. But with the other major central banks making similar interventions, that hasn’t happened. Even negative ECB interest rates are no longer as powerful a deterrent, as other global rates have fallen substantially.

The U.S. Federal Reserve’s crisis response has had a particular emphasis on capping dollar strength to prevent a systemic global recession. The Fed’s success is having a knock-on effect in boosting other currencies. But the euro is noticeably outperforming versus other major currencies too, such as the Chinese yuan and the British pound.

The real difference in Europe has been the combination of the ECB’s monetary stimulus with a substantial domestic and EU-wide fiscal response. This has improved investor perceptions of the EU’s longer-term growth potential. If even the famously parsimonious Germans are backing fiscal transfers to the hard-hit Italians and Spanish, this sends out a strong signal — one that’s very different to the austerity imposed on Greece after the last crisis.

Monday’s Franco-German summit between French President Emmanuel Macron and German Chancellor Angela Merkel was marked by a firm commitment to getting their proposed 750 billion-euro EU recovery fund over the line this summer. While Austria, the Netherlands, Sweden and Denmark have valid concerns about how the money’s spent, the tide in Berlin has turned definitively in favor of a more unified economic response to keep the euro project alive.

Germany assumes the six-month rotating presidency of the EU on Wednesday, and Merkel won’t want her legacy tarnished by another European failure. It’s just a shame that it took a global pandemic to snap the Germans out of their austerity mindset. There are many roadblocks ahead in Europe’s recovery, but a stronger currency shouldn’t be one of them.