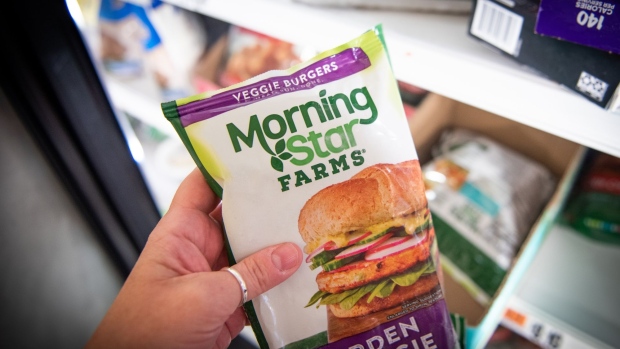 (Bloomberg) -- Fake meat was supposed to save the world, but it has some real problems: skeptical consumers walking away from companies like Beyond Meat Inc. and Impossible Foods Inc. and sinking sales. Traditional veggie patties aren’t faring much better.

Read More: Fake Meat Was Supposed to Save the World. It Became Just Another Fad

In the year leading up to Dec. 4, supermarket sales of refrigerated plant-based meat slumped 14% by volume according to retail data company IRI. When strictly looking at frozen veggie patty sales the trend is even worse: those sales dropped 16% by volume in the year ended Jan. 1, according to SPINS, another retail data provider.

In 2020, roughly half of US consumers believed fake alternatives were healthy. Now, that’s down to just over a third of Americans, according to a report from Citi Global Insights. For all the hype of alternative meat, fake burgers and sausages are at risk of becoming a passing fad. Long before faux meat, there was the humble veggie burger. The patties—amalgamations of quinoa, black bean, carrots and more—may not look or taste like meat, but for the veggie-curious, they’re a time-tested alternative.

Here’s how the biggest brands stack up to faux-meat.

Kellogg Co.’s plant patty packs in the vegetables—carrots, onions, mushrooms, and bell peppers—alongside oats and rice. One Garden Veggie Patty comes with about 10 grams of protein. Even so, that falls short of the 19 grams in an Impossible patty, which in 2019, dethroned Morningstar as the veggie go-to served at Burger King.

Conagra Brands Inc. offers Gardein varieties of veggie and black bean patties. Conagra bought Pinnacle Foods in 2018, giving it rights to Gardein’s patties alongside its meatless chicken, fish and sausages. In 2020, the company got into the faux meat market as well with the Ultimate Plant-Based Burger designed “to mimic the taste of real beef, with no soy ingredients and no GMOs.”

Kraft Heinz Co.’s BOCA All American Veggie Burgers carries soy protein, garlic, onion and cheddar cheese and is advertised as a “hearty addition” to any vegetarian diet. A 71 gram patty includes 14 grams of protein and is pushing itself to become an alternative favorite for BBQ enthusiasts across the country.

Lightlife, which is owned by Greenleaf Foods SPC, offers plant-based burgers that are free of soy and gluten, and carry 20 grams of protein. Lightlife has been a fixture in the market for old-school veggie patties with products sold in at least 12,000 retail stores across North America.