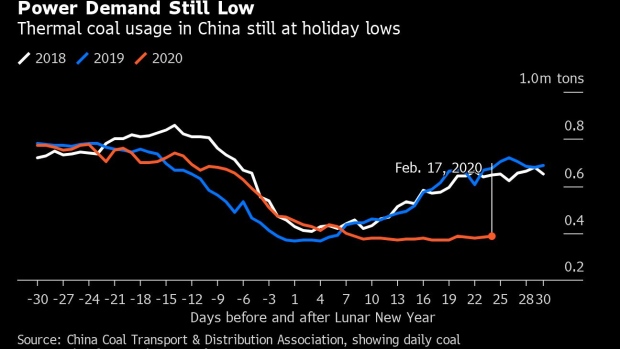 Empty streets in Wuhan on Feb. 16. , Getty Images via Bloomberg

(Bloomberg) -- The biggest question for the global economy right now is how quickly China can get back to anything like normal operations while it’s battling the coronavirus outbreak that has killed almost 1,900 people and sickened tens of thousands.

Government controls and people’s fears to go outside have decimated spending for businesses from local noodle joints and Starbucks stores to Alibaba delivery men. Meantime, many factories are still not working due to a lack of staff, with workers trapped in their hometowns or spending two weeks in quarantine.

China’s economy was likely running at just 40%-50% capacity last week, according to a Bloomberg Economics report. The following data track how much of the world’s second-largest economy remains out of action:

About the same number of trips by planes, trains, automobiles and boats was taken in the run up to the Lunar New Year this year compared to last year, but the fall off since the first day of the Year of the Rat on Jan. 25 has been stark. On average, there’s only about 20% as many trips being taken each day, meaning millions of people still haven’t traveled back to work. And with long-distance buses only allowed to operate at 50% capacity to reduce the risks of viral transmission, that backlog will take a long time to clear.

Although some companies, especially large state-owned industrial firms and those making medical equipment, have ramped up output, demand for electricity is still well below where it should be at this time of year. Along with anecdotal reporting from across China’s vast east-coast manufacturing heartland, the power numbers suggest much of the nation’s industrial capacity remains idle.

Emissions of nitrogen dioxide in the week after the holiday were 36% below where they were at the same point after the new year break in 2019, according to the Centre for Research on Energy and Clean Air, which cited satellite data. A slowdown of 25%-50% across industrial sectors such as oil refining, coal-fired power generation and steel production contributed to the drop, according to the independent research organization.

A survey of 109 American manufacturing companies in and around Shanghai showed that although almost 70% were operating last week and more than 90% expected to be back by this week, 78% of firms said they didn’t have sufficient staff to run a full production line.

Alibaba Group Holding Ltd, the first major Chinese technology corporation to report results since the epidemic emerged in January, said the virus is undermining production and has changed buying patterns, with consumers pulling back on discretionary spending, including travel and restaurants.

That drop in discretionary spending can be seen clearly in the plunge in box office revenue this Lunar New Year.

Even if people do want to spend, many shops are shut, and online and offline retailers are facing logistical problems to supply customers. That situation may continue until the virus is contained, people are back at work and getting paid, and they feel confident to spend again.

Note: Economists at Australia and New Zealand Banking Group, Nomura Holdings and Goldman Sachs Group are among those that have referred to some of these indicators in recent research. Bloomberg News will update this item as the situation continues to involve, adding data as it becomes available.

To contact the editors responsible for this story: Jeffrey Black at jblack25@bloomberg.net, Malcolm Scott