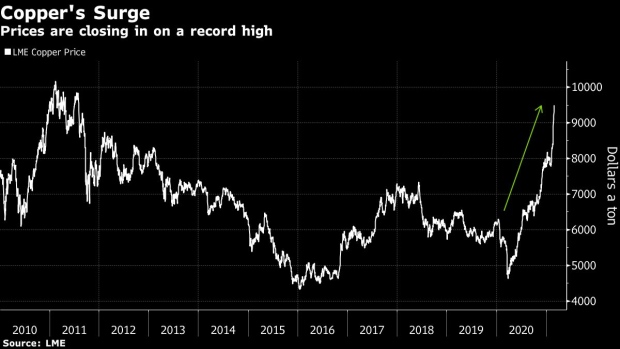 (Bloomberg) -- Copper could surge above a record to $12,000 a ton in 18 months on new demand from green initiatives, a leading metals trader said, giving one of the most bullish forecasts yet for the metal.

The bellwether material has already doubled since a nadir in March to reach a nine-year high, and is roughly 7% below the record of $10,190 set in 2011 as bets on an economic recovery and tighter supplies entice investors. But current prices would seem “far too low” if governments fulfill pledges for green infrastructure and electric-vehicle incentives, Concord Resources Ltd. said.

“People need to be aware of the potential for a changing paradigm in terms of pricing,” said Mark Hansen, chief executive officer of the trading house. “In copper, the market is not yet pricing in the addition of potentially millions of new tons of copper demand over the coming decade.”

If governments follow through with plans for greater electrification of economies, copper prices would need to climb to a level that prompts demand substitution and miners to invest in new production, according to Hansen.

“It simply doesn’t happen at $10,000,” he said. “I would predict that if all those circumstances come true, we really need to see $12,000 copper to bring the market into balance and properly incentivize new production.”

Aluminum may be among other metals to benefit as manufacturers look to substitute cheaper materials amid copper’s rally, Hansen said. Plus, pressure to clean up carbon-intensive sectors could lead to a cap on Chinese aluminum production, pushing prices to the “high $2,000s” from about $2,200 a ton now, he said.

Concord is one of several mid-sized metals traders that compete with leading merchants Glencore Plc and Trafigura Group. The London-based company was profitable last year and delivered 3.9 million tons of raw materials to customers, Hansen said. Both Glencore and Trafigura have given optimistic views about the copper market, but neither has publicly made a forecast as bullish as Concord’s.

Hansen said the main risk to his outlook was if governments fail to implement plans for green-stimulus spending. He also warned that any weakness in China’s economy would cause metals prices to stumble.

Still, he sees any pullback as a buying opportunity, and pointed to low inventories following large imports by China last year.

“The stocks that should have built in a recession and then you would normally draw down in an expanding economy are not there,” Hansen said. “That’s a very supportive factor.”

Also, the retreat by some banks from commodity trade finance had restricted funding to producers, potentially further supporting prices.

“There is a risk that because commodities have relatively been under-appreciated assets for most of the last 10 years, those of us in the industry aren’t recognizing the scarcity value of some of these markets with rapidly changing dynamics of demand,” Hansen said.