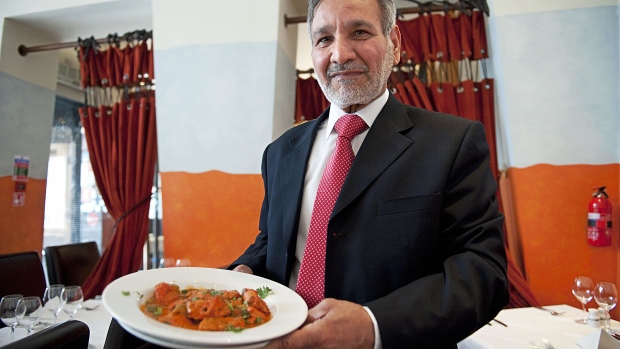 (Bloomberg) -- Asma Khan has a vivid memory of the first time she encountered chicken tikka masala, the bastard child of Indian cooking and British taste. It was in 1992, and she was newly arrived in the great English university town of Cambridge, where her husband was studying law. A professor invited the young couple to dinner at an Indian restaurant, where he ordered the dish, a staple of curry houses across Britain.

“I was confused,” recalls Khan of the chunks of mildly spiced chicken, roasted and then stewed in tomatoes and cream. “I thought I knew about Indian food, but this was completely unfamiliar. I honestly thought someone in the kitchen had made a mistake.” In the Indian tradition, a tikka is ready to eat when roasted. Stewing it is superfluous, and doing that in tomatoes and cream is downright silly.

Samir Tharkar, born and raised in the UK, has a very different recollection of his first experience of CTM, as the dish is commonly known in the country of its creation. “I had it at the Curry Pot, a popular restaurant in Leicester where my parents used to take me,” he says. “I don’t think I knew or cared whether it was really Indian. It was just … there.”

Khan is now the celebrated chef of the about-to-reopen Darjeeling Express, Britain’s best Indian eatery, and Tharkar is the founder of the wildly successful Dishoom chain of Indian restaurants. Both take pride in the authenticity of their fare—and wouldn’t dream of putting CTM on their menus. But they readily acknowledge the debt they owe to a dish that belongs to the pantheon of the world’s great gastronomic half-breeds, alongside spaghetti with meatballs, chop suey and the California roll.

CTM, Tharkar says, “helped to make Indian flavors familiar to British palate, a necessary step to making Indian the most popular cuisine in this country.” Khan puts it more bluntly: “If there was no CTM, there would be no Darjeeling Express.”

CTM jumped back into the international spotlight at the end of December when chef Ali Ahmed Aslam, the man widely credited with creating it, died in Scotland.

In the creation myth of CTM, a customer who came in to eat at Shish Mahal in Glasgow complained that the chicken tikka was too dry, prompting Aslam to create a quick sauce from a handy can of Campbell’s condensed tomato soup. Aslam dated the birth of the dish to sometime in the 1970s. (Who added the cream is not known.) By the early 1980s, when Tharkar sampled it at the Curry Pot, CTM was already a smashing success around the country. Twenty years later, Foreign Secretary Robin Cook would describe it as  “a true British national dish.”

Full disclosure: Although by no means a culinary purist, I am not a fan of CTM.  Every version of the dish I’ve tried—and, having lived in London for five years in two stints, I’ve tried plenty—has been disappointing. For my particular taste, the spice marinade (which invariably includes cumin powder, coriander powder and turmeric) loses too much of its flavor when the roasted meat is stewed in the tomato and cream gravy.

But the softening of the spices is the secret to the dish’s success. The sauce, Cook pointed out, satisfied “the desire of British people to have their meat served in gravy.” In addition to giving eaters something in which to soak their naan, it made the dish less spicy and therefore more palatable to Brits brought up on relatively bland fare. In time, like a gateway drug, CTM encouraged them to try progressively more fiery dishes—a tendency that thrived in a culture of binge drinking. At the time of my first stint in London, from 2002 to 2003, the curry houses were serving up vindaloos that registered high on the Scoville scale, in hues of orange and red achievable only with edible dyes.

There were early signs of a countertrend. Here and there, an Indian restaurant would buttress its claim to authenticity by leaving CTM off its menu. I remember the waiter at Masala Zone, in Soho, curling his lip in disdain when asked why it wasn’t available.

In an unexpected twist, though, the dish traveled to India, where some restaurants had begun to serve it as a kind of curiosity, in the way you can sometimes find a California roll in a Tokyo sushi bar. The underlying sentiment was, “Look at what those crazy Brits are calling Indian food!”

By the time of my second sojourn in London, from 2018 to 2021, CTM was no longer featured on the menus of the better class of Indian restaurants. The likes of Dishoom and the newly opened Darjeeling Express had set the bar much higher, and my Londoner friends regarded the old staple as a kind of inside joke. They took satisfaction in the fact that their tastes had grown sophisticated enough to leave CTM behind.

Not too far behind, though. For anyone nostalgic for the old tomato-and-cream sauce, British grocery stores offer a wide variety of ready-to-eat versions. During the Covid lockdowns, I ordered one from Tesco’s. Alas, it wasn’t an improvement on the iterations I’d tried over the years. But if I couldn’t enjoy it, I couldn’t but admire its stubborn resistance to changing fashions and its sheer durability as a British favorite.

Meanwhile, CTM has conquered new frontiers. You’ll find it in menus across the US and Europe, serving the same original function as an introduction to Indian cuisine for timid palates and a harbinger of more authentic flavors to come. What’s more, plenty of restaurants in the Indian subcontinent now serve it without irony. Ali Ahmed Aslam lived long enough to see his invention gain acceptance in the land of his birth as well as the one of his choosing. His passing was mourned by Vir Sanghvi, India’s preeminent gastronome, who wrote that CTM had become as ubiquitous as other beloved culinary bastards: “Chicken tikka masala is as Indian as chicken Manchurian is Chinese. But as long as people enjoy the dish, who are we to be judgmental about it?”

Sanghvi’s right. Ignore the reservations of this sniffy New Yorker and discover (or rediscover) for yourself why chicken tikka masala endures.