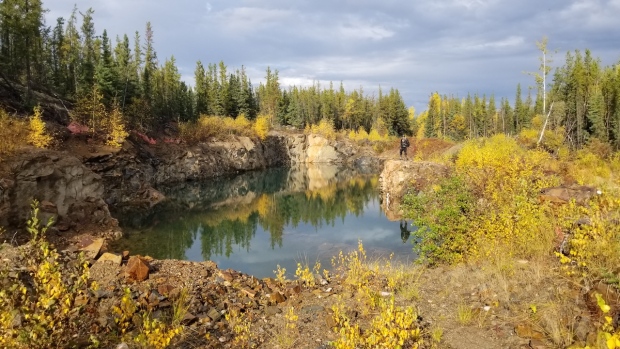 The Greywacke property bulk sample test pit. In 2013 the bulk sample test processed 12.164 t of material and produced 2,533 troy oz of gold with an average grade 6.87 per cent, the metallurgy allowed for 94.3 per cent gold recovery. , Image courtesy of Market One Media

Say "Saskatchewan" and you're more likely to think of fields of golden wheat waving in the wind than the potential of substantial gold deposits beneath them waiting to be harvested.

To most investors, the prairie province's mining resources are confined to potash and uranium. When it comes to precious metals mining in general and gold in particular, Canada's breadbasket is the Rodney Dangerfield of the mining space: it gets no respect.

But that's changing. Eager to develop its rich mineral resources, Saskatchewan has adopted an efficient regulatory environment, a high-quality geological database, and other policies that are attracting major global mining companies to the province. Premier Scott Moe sees providing certainty for the mining sector as critical to Saskatchewan's post-pandemic economic rebuild.

"Saskatchewan was ranked number one among 111 jurisdictions across 83 countries for our opportunity in the mineral exploration and mining sectors," Moe said recently on LinkedIn.

"Our province's work in creating a secure place for mineral exploration and mining investment will be a key factor in our continued economic recovery post COVID-19."

The new shine on Saskatchewan's precious metals respectability glows most brightly in the La Ronge Domain in north-central Saskatchewan. This established gold-bearing belt has already attracted the attention of SSR Mining, which has invested $15 million to date in the region.

The area has a lot going for it — good geology, proximity to infrastructure, and support from local communities.

"It's like coming full circle — a homecoming," says Netolitzky. "It's a great opportunity because this is a region whose time has come."

Netolitzky helped realize the potential of the Snip and Eskay Creek properties in northwest B.C., which became two of Canada’s most successful, high-grade precious metal mines. He received the Bill Dennis Prospector of the Year Award in 1990 and the E.A. Scholz Award in 1996 for his discovery and development achievements. He was inducted into the Canadian Mining Hall of Fame in 2015.

All that experience has Netolitzky excited about the La Ronge Domain's potential.

"We think there are opportunities in the La Ronge Domain belt and that multi-million-ounce deposits will be found. I know that if you explore gold occurrences to death and you continue exploring them, they usually become larger than you thought they were."

MAS Gold has a substantial footprint in the La Ronge Domain, with properties that have shown significant early results and promise more positive prospects as the company moves forward with a comprehensive 2021 field season.

Its Greywacke Lake and Preview-North Lake properties comprise 18 mineral claims totaling 14,996 ha. In total, the company has the rights to over 45,000 ha in the area.

"We have a significant program ahead of us, focusing on three main project areas," says Dave Tupper, Vice President of Exploration. "There's definitely lots of geology to look at here."

The Preview-North Property 40 km to the southwest, includes the North Lake deposit where MAS Gold has defined a shallow, inferred 417,000 oz resource based on 14,110,000 tonnes grading 0.92 g gold/t gold.

MAS Gold has a comprehensive 2021 development and exploration work plan

This year with drill permits in hand, MAS Gold will concentrate on expanding and upgrading the confidence classification on the known Greywacke North and North Lake resources, continue metallurgical characterization of gold-mineralized materials and strengthening relationships with the Lac La Ronge Indian Band, the Métis Local and the greater community of La Ronge.

"The goal is expanding the resources that we have there already and developing new ones in areas where we have quite a significant amount of data," says Tupper.

"It's exciting because of the potential we know is there. It also helps that it's extremely accessible with a highway right through the Greywacke North and Preview-North properties. The North Lake deposit is only 500 m off the highway and Greywacke North is easily accessible by eight km of good, all season roads."

Netolitzky says building on the company's working-level relationship with the Lac La Ronge Indian Band, the Métis and the greater community of La Ronge is also a priority.

"The Indigenous people form a core group of experienced people we work with in the area," says Netolitzky. "And a large percentage of our crews are locals. Having local support is very important."

Things are lining up for MAS Gold moving forward in a perfect positive storm that promises results. Netolitzky points to the company's strong and experienced management team that has "A lot of Saskatchewan-based knowledge" as well as mining sector experience.

The company also has a new CEO, James Engdahl, who has more than 20 years of experience in corporate finance at the executive level that include mergers, acquisitions and reorganizations. A former Vice President of Barclays Bank of Canada, Engdahl is also a former President, CEO and Director of Great Western Mineral Group Ltd. as well as a former Director for Great Western Diamonds.

That management team now has multiple, high-quality assets currently under exploration in a mineral belt that has the same mineral characteristics as the legendary Black Hills of South Dakota and gold regions of East Africa, but also boasts a favourable mining jurisdiction and lots of exploration potential moving forward.

"It's a wonderful opportunity. There's great geology, it's a great jurisdiction to work in and the time is right," says Tupper.

"Add to that, the property locations are very amenable to keeping costs low. We're definitely excited about getting out there."

To learn more about MAS Gold, visit their website here.

Make sure to follow MAS Gold on social media: