The metals and mining sector is a massive resource producer and a massive resource consumer. It exhumes raw materials and transforms them, through energy-intensive processes, into the modern features of our built environment. In so doing, it also creates about a quarter of the reported emissions of the world’s 12,000 largest companies. As with other hard-to-abate sectors like cement production, or marine shipping, significantly lowering the emissions profiles of metals and mining will be crucial to meaningfully decarbonizing the global economy.

Starting that effort requires measuring where companies and sectors are today. BloombergNEF has just released its first business model transition score for 53 major metals and mining companies. Scores measure each company’s risk from their current emissions profile, and their business’s preparedness for deep decarbonization. The results highlight where companies are moving quickly and where they are going slow, and importantly, creates distinctions between companies for investors interested in grading enterprises on their transition efforts.

The BNEF scores are presented as two-parters. The first is business model risk – that is, how much a company is exposed to demand for its products shrinking (or growing) in a net zero emissions scenario, the emissions-intensity of its products, and the strength of stakeholder pressure to act on emissions. The second is business model adaptation – that is, the company’s strategy to align its portfolio with net-zero trends, how easily can it produce lower-carbon products compared to its peers, the scale of decarbonization technology it has today, and its incorporation of climate risk into management decision-making.

The findings are instructive, in a number of ways. Most of the top companies are Europe-based, thanks largely to a policy environment encouraging or forcing moves to significantly reduce emissions. Only three companies in the top 10 are based outside of Europe – Codelco, in Chile; Tata Steel, in India; and BHP, in Australia. 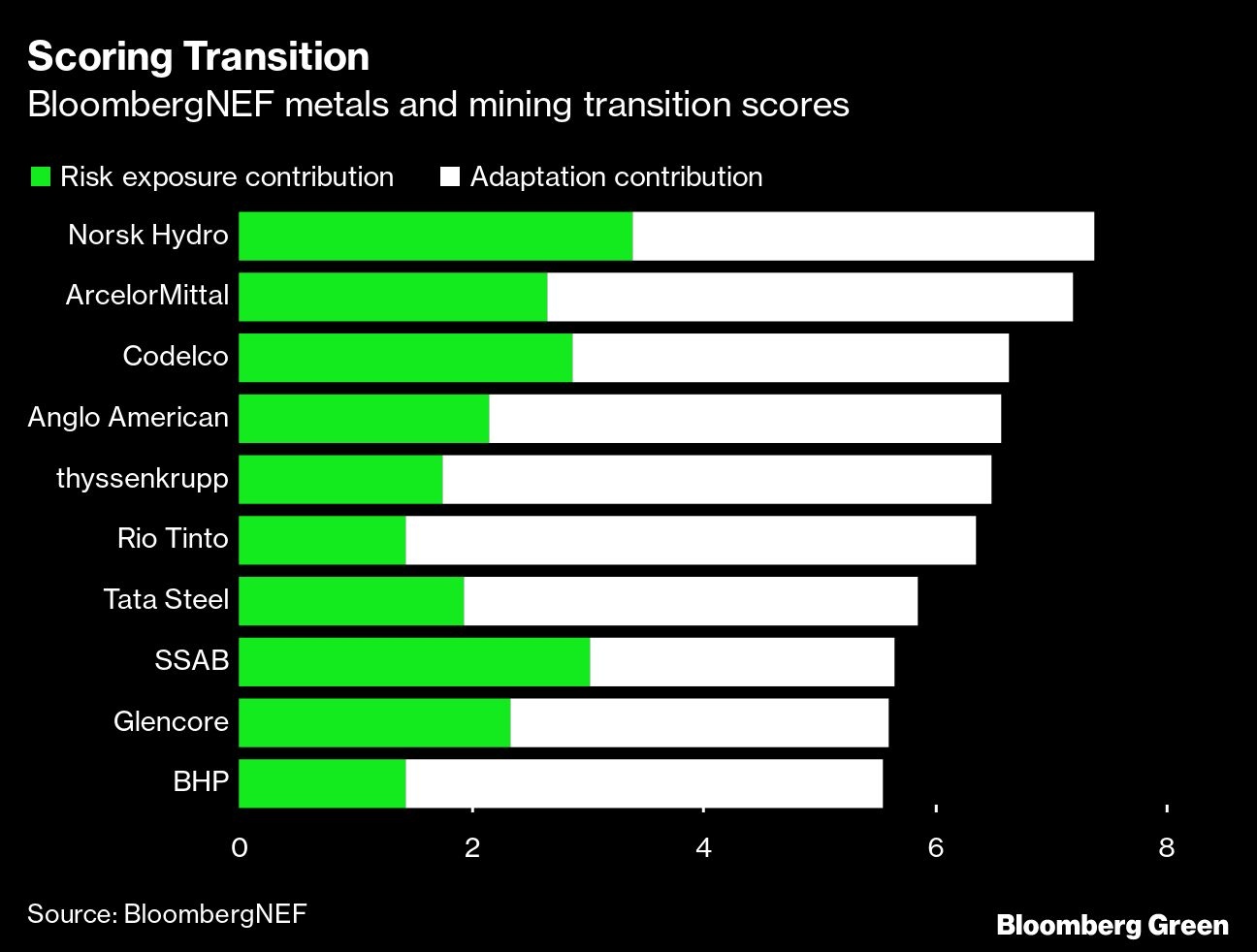 Technology, and investment in technology, is predictive. The presence of low-carbon technology programs (often labeled low-carbon solutions) is important for scoring highly. Those programs include efforts such as metals recycling capacity, renewable electricity use, projects to utilize hydrogen instead of coal or gas for combustion and chemical processes, and carbon capture, use, and storage initiatives. In a related fashion, the electricity intensity of production can become a future competitive edge as well. Norsk Hydro and ArcelorMittal both produce final products that are highly electricity-intensive, and both are developing low- or zero-carbon electricity sources for use in their production processes.

Customer engagement is significant as well. Net-zero goals among carmakers and other large metals buyers implicates their suppliers, the metals and mining companies. Of the companies studied, more than a third had disclosed a substantial number of customers with their own value chain decarbonization targets. Metals producers in particular will find that they either need to deliver low-carbon metals, or risk losing clients.

Size matters too. Larger companies score more highly than smaller companies. The reason is fairly simple: larger companies are most likely better able to finance decarbonization activities using their own resources, or through their access to capital markets funding.

However, there is an important wrinkle to company size. Being big helps. But being diversified and selling a number of metals, or being integrated, and active along entire value chains from mining ores to final metals production, does not. The highest-scoring companies for each type of metal are highly focused on one product and one segment. Norsk Hydro only produces aluminum; ArcelorMittal gets 95 per cent of revenue from steelmaking; Codelco gets more than 90 per cent of revenue from copper mining. Rio Tinto gets almost 60 per cent of its revenue from iron ore, and another 20 per cent from aluminum. Narrowly-focused companies have the ability to hone in on particular technologies and products, and (provided they are larger in size) distinguish themselves from their peers. 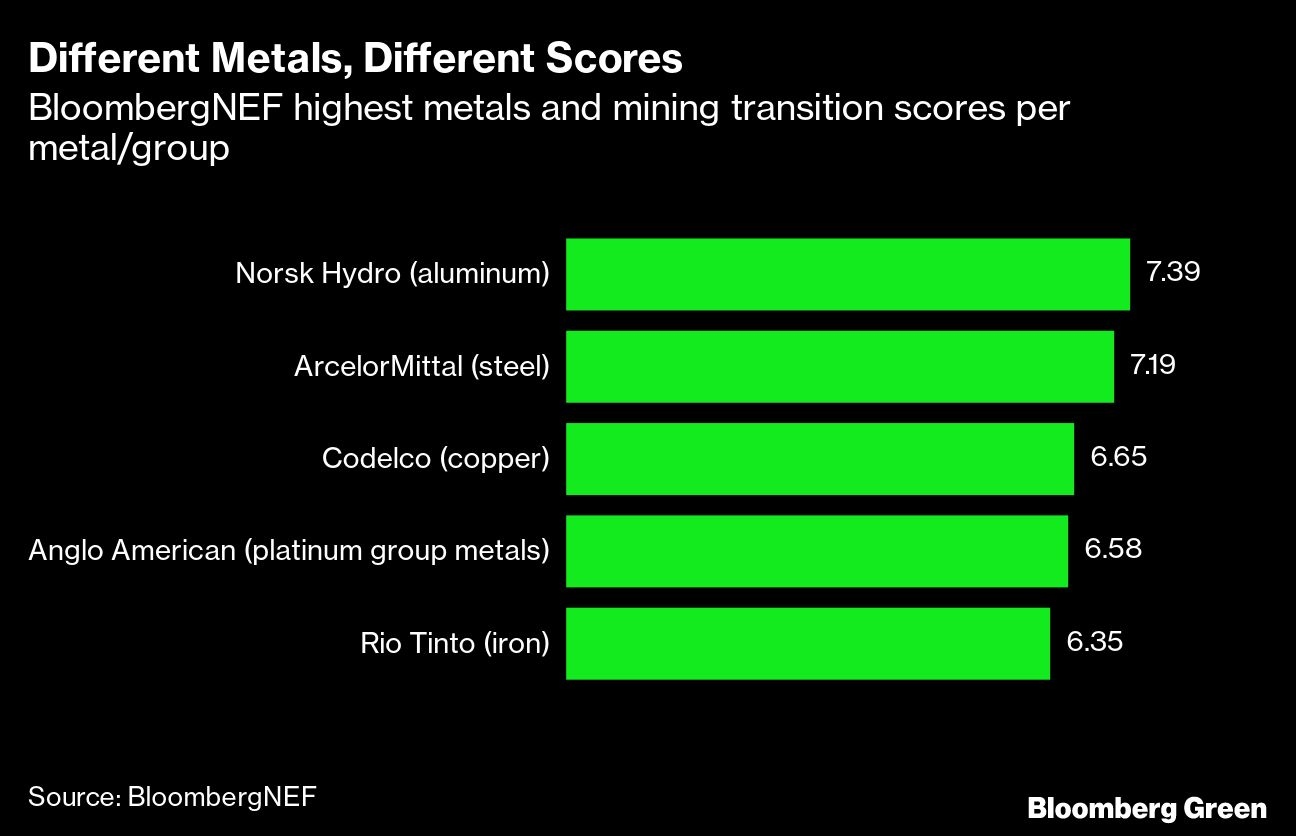 Diversified companies might have big balance sheets thanks to selling many products in many markets, but they also must adapt in a wider range of measures in order to decarbonize. Only Anglo American, with revenue split roughly evenly between platinum group metals, iron ore, and copper, is an outlier among top performers.

Mining companies have the widest range of BNEF transition scores. That breadth gives investors much to examine, when considering miners’ role in a deeply decarbonized future: what they produce, how they do it, with which technology and innovation plans, and finally, with which degree of commitment to ready themselves for the future.