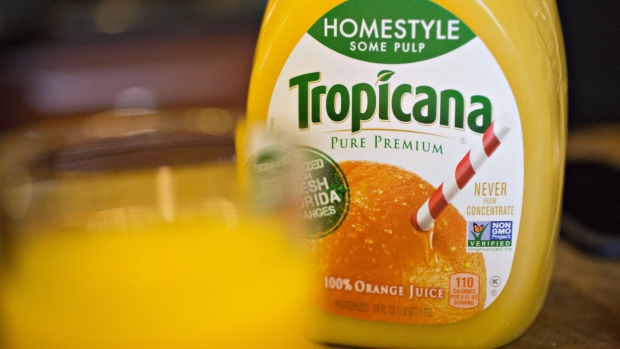 (Bloomberg) -- By now, many consumers have heard of glyphosate, the active ingredient in the herbicide known as Roundup, and warnings about its presence in many of their favorite foods. From oatmeal to granola bars, ice cream to even orange juice, trace amounts of the chemical can be found throughout your local supermarket.

It’s the world’s most widely used weedkiller—a blockbuster for Monsanto Co. since it was introduced in the 1970s. The vast majority of U.S. corn and soybeans have been genetically modified to withstand it, making it a critical component of modern farming. But in 2015, the International Agency for Research on Cancer—an arm of the World Health Organization—labeled it a probable carcinogen. Since then, it’s become a legal headache for Monsanto, and now Bayer AG, which bought the company in June for $66 billion.

While regulators including the U.S. Environmental Protection Agency say the glyphosate found in food isn’t a problem because it’s at low levels, some scientists contend not enough is known about the effects of eating small amounts of it, especially over long periods of time.

“It does seem to be in everything,” said Cynthia Curl, the co-director of the Center for Excellence in Environmental Health and Safety at Boise State University. “We know enough that we should be learning more.”

Bayer rejects the IARC report and says glyphosate is “safe when used as directed.” For support, it points to numerous studies as well as regulators including the EPA and the European Food Safety Authority, which have said the weedkiller is unlikely to be a carcinogen. But in a major defeat this week in California state court, a judge upheld a jury’s verdict that Roundup contributed to a dying groundskeeper’s cancer. Working for a school district in California, Lee Johnson had mixed and sprayed hundreds of gallons of the herbicide.

Bayer, ordered to pay $78.6 million, said it plans to appeal—but an additional 8,700 plaintiffs are waiting in the wings, with lawsuits that one analyst said could mean hundreds of billions of dollars in potential liability.

Growing consumer worries about chemical residue are part of a broader “clean food” movement. Shoppers are increasingly seeking foods in their purest forms, said Darren Seifer, food and beverage industry analyst at NPD Group. Foods labeled organic or all-natural have grown in popularity, and more than half of adults are avoiding artificial ingredients and preservatives. This is especially the case for millennials and Generation Z. Regardless of how the Roundup litigation ends, the food industry is already scrambling to adapt to public awareness of agricultural chemicals in the food supply.

New claims are showing up on food labels to satisfy discerning consumers. About one-third of vegetable buyers think “pesticide-free” is important, according to a Mintel report. One company, Detox Project, is offering “glyphosate-residue-free” certification for food brands; it said the number of companies asking for its services has soared along with interest in “clean food.”

“Some people are concerned with risks, no matter how small,” said Michael Hansen, senior staff scientist of the Consumers Union, the advocacy arm of Consumer Reports.

The Trump administration has said there’s nothing to worry about. The U.S. Food and Drug Administration, which is testing for glyphosate levels in harvested crops for the first time, released data earlier this month. In milk and eggs, none was detected, according to the agency. In corn and soybean samples that did test positive (many tested negative), the amounts were below minimum levels established by the EPA, the government said.

This week, a new study reminded Americans of the presence of the chemical in that quintessential American breakfast drink—orange juice—and the results were arguably good news for the industry.

Commissioned by the nutritional awareness advocacy group Moms Across America, it was performed by Health Research Institute Laboratories. The effective glyphosate level found in orange juice ranged from a low of 2.99 parts per billion (for Safeway’s Signature Farms brand) to 17.16 parts per billion (for Tropicana) at the high end. Results for Minute Maid, Stater Bros. Orange Juice, Florida’s Natural and Costco’s Kirkland brand all fell somewhere in between. Both ends of the spectrum are lower than last year’s results, which ranged from 4.33 to 26.05. The EPA guideline for allowable levels of glyphosate in citrus fruit is 500 parts per billion.

The Juice Products Association, an industry lobbying group, and Stater Bros., Minute Maid and Costco all emphasized that they adhere to federal and state regulations. Tropicana, Safeway and Florida’s Natural didn’t respond to requests for comment. The JPA, meanwhile, questioned the validity of the new study’s results because the method used (one created by Monsanto) was written for testing milk. As for why the study showed a decrease in the level of glyphosate, no one could say for sure.

The amount applied to control weeds in a citrus grove depends on rainfall, temperature and the variety of citrus being grown, among other variables, said Andrew Meadows, director of communications for industry cooperative Florida Citrus Mutual. While he can't explain the results of the study or vouch for their accuracy, he said growers are always looking to reduce their inputs, including pesticides. The state agency in charge of both regulating and marketing Florida citrus said groves are “treated judiciously with approved products that have been extensively evaluated for safety by expert groups and government agencies.”

Of the new study, Bayer toxicologist Bill Reeves said: “The numbers may be accurate, but the conclusion that there’s something to be concerned about is inaccurate.” Reeves, part of the company’s regulatory policy and scientific affairs team, points to the EPA guideline for citrus fruit, which is more than 29 times the highest concentration found in the study.

Carl Winter, a toxicologist at University of California at Davis, was more blunt. “One would need to be exposed to about 250,000 times the highest level of [the orange juice] sampling to pose any initial level of concern,” he said, noting that he performed this analysis with a 66-pound child in mind. “That in itself is still 100 times less than what causes effects in laboratory animals.”

Existing research is limited because there isn’t a promising method to measure how much glyphosate is in a human body, said Melissa Perry, professor of environmental and occupational health at George Washington University. While the U.S. Centers for Disease Control periodically conducts a national assessment of hundreds of chemicals to see how much is contained in the bodies of average Americans, glyphosate is notably absent, Perry said.

Companies that say products containing glyphosate are safe can’t point to any studies “that can measure glyphosate in the body and point to specific health outcomes,” she said.

For the entire population,the results may be more concerning.

Perry is among a group of researchers in Europe and the U.S. working on a study examining the health effects of the chemical at everyday exposure levels. A pilot released earlier this year found adverse health effects in rats when given doses of glyphosate at levels deemed safe by the EPA, including altered sexual development in female rats. In an emailed statement Thursday, Bayer said “the effects of glyphosate on reproduction and development are part of the regulatory assessments. The data consistently demonstrate that glyphosate does not harm reproduction and development in humans.”

Bruce Lee, associate professor of international health at Johns Hopkins Bloomberg School of Public Health and executive director of the Global Obesity Prevention Center, said there should be more concern from companies and regulators before a chemical is introduced into the marketplace—not afterward. Bayer, when asked what testing of glyphosate took place prior to it being offered for sale, responded that “pesticides undergo incredibly comprehensive evaluations by regulatory authorities before they can be sold. In the U.S., the EPA requires all pesticides to undergo more than 100 safety studies before they are approved.”

Pam Factor-Litvak, a professor of epidemiology at the Columbia University Medical Center, said that a lack of immediately apparent effects from chemical exposure on individuals doesn’t end the conversation. A longer timeline and evaluation of effects on the whole population are needed to properly evaluate risks.

“When you look at the studies of environmental chemicals, you can’t think of individual inferences,” she said, noting that individual results, for example, can be within a margin of error. But for the entire population, the results may be more concerning. “It gives you a larger tail on the harmful end.”

To contact the authors of this story: Deena Shanker in New York at dshanker@bloomberg.netLydia Mulvany in Chicago at lmulvany2@bloomberg.net