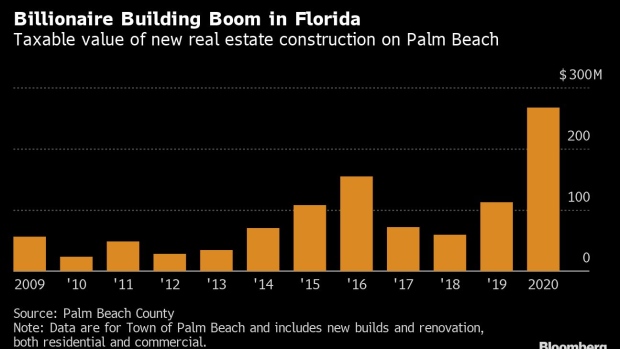 (Bloomberg) -- Sign up to receive the Green Daily newsletter in your inbox every weekday.

It feels like a precipice moment for Palm Beach, a Florida town in the throes of a waterfront mansion-building mania just as the impacts of climate change start pushing in.

At the town council’s regular meeting this past week, officials talked about the need to raise the grade of a beloved bike trail—and, at the same time, somehow add height to the privately-owned seawalls running alongside it. Raising both together would help preserve views and accessibility.

But if individual sections of the public bikeway and the mansion-fronting seawalls are raised piecemeal and go out of sync, it would weaken the defense against flooding and make for uneven pedaling. As the town’s director of public works Paul Brazil put it, “We don't want our bike trail to become a mountain bike trail.”

The next day, at another meeting in the same room in Palm Beach Town Hall, some of the same cast of characters recalled the insurrection that took place years ago when the council got close to passing building-code reforms that would have regulated megamansions. Some moneyed locals got together, formed a political group and quashed the effort.

Any rule that impacts waterfront properties on Palm Beach Island, particularly in neighborhoods like the North End with more modest homes, risks backlash that can seem more intense than any flood. “Code reform, it’s like touching the third rail—you do that and you get electrocuted," said Lew Crampton, a member of the town council.

And yet the message of this week’s two meetings was clear: Palm Beach’s planners and elected officials can’t steer away from mansion politics forever. Flood risk is rising in tandem with the island’s extraordinary real estate prices—and the boom, in turn, is what provides lavish tax revenue to spend on new coastal defenses to protect increasingly valuable megamansions.

That dynamic is at the center of the feature story I wrote with Prashant Gopal for Bloomberg Green. Some local millionaires and billionaires say they aren’t worried about protecting their homes for climate change risk, either because the worst of it will come too late (most people in Palm Beach are over 65) or because these are people with plenty of money to pick up and move somewhere safer. Still, there’s nothing like a superheated waterfront housing market to create heightened awareness of all the ways the coasts are less safe than before.

The houses in this boom are not only getting bigger and more expensive, they’re also getting lifted higher above maximum-risk flood zones and getting outfitted with flood gates, frangible walls, and other bespoke defenses against extreme weather. The town has a responsibility to do its part for homeowners, which means weighing new rules to mandate resiliency while embracing public works to protect the public good and quality of life.

As part of an effort by town staff to lean in to climate preparation, consultants from the Woods Hole Group have been hired to prepare detailed suggestions for addressing the island's vulnerabilities. The report is nearly final, although debates over implementation will likely have to wait until seasonal homeowners return later this year.

Paul Castro, a zoning official, said the code was written so that everybody who renovates or rebuilds has to go before the town to do anything different from what's prescribed—and just about everybody does so (with lawyers getting plenty of billable hours in the process). Changing what homeowners can do on the land they own, like mandating seawalls of equal heights, could encounter resistance.

Palm Beach officials this week decided to seek an expert in code reform. They also discussed the urgency of managing relations with homeowners. Despite its deep pockets, the town currently has no public affairs officer. There’s likely turmoil to come.

For the rest of us who don’t live in a waterfront mansion, it’s going to be worth watching how this goes. Because Palm Beach is undergoing a process of adaptation that’s going to play out again and again in the near future, along vulnerable coasts across the country.