How Perimeter Medical aims to transform cancer surgery with its innovative tech - BNN Bloomberg
{{ currentBoardShortName }}
Markets
As of: {{timeStamp.date}}
{{timeStamp.time}} 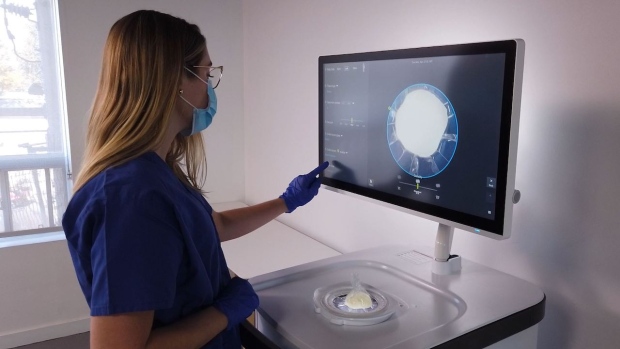 Every surgery leaves something behind. Often, it’s a scar or some temporary discomfort. For a patient who has undergone surgery to remove cancer, however, there is also doubt, anxiety, and fear — and, sometimes, a few potentially deadly cells.

About one in eight women will develop invasive breast cancer over the course of her lifetime. And while treatment has come a long way from the days of routine radical mastectomies, there is the possibility that a surgery doesn’t remove all cancerous tissue, which can mean a patient returns to the hospital for additional procedures once follow-up pathology reports are completed. Current estimates suggest that as many as one in four patients require additional surgeries after undergoing breast lumpectomy surgery.

“The current intraoperative imaging methodologies do not reliably give you that microscopic information and that’s where Perimeter comes in. It could basically solve that dilemma.”

But what if microscopic information about the tissue could be acquired mid-procedure, while the patient is still on the operating table with the surgeon and other medical staff ready to act?

The best time to deal with cancer

According to Dr. Ted James, MD, MS, FACS, who is Chief of Breast Cancer Surgery at Beth Israel Deaconess Medical Center in Boston, Massachusetts, teaches at Harvard Medical School and is a member of Perimeter’s clinical and scientific advisory board, this is how Perimeter’s technology could help surgeons and their patients:

During tissue excision surgery — for example, a lumpectomy, which is Dr. James’ specialty — the surgeon carefully cuts away cancerous tissue, cutting around the diseased area to ensure they have removed it all.

The tissue that is removed can then be scanned by Perimeter’s ultra-high-resolution imaging system in minutes to enable the surgeon to visualize the margins of the excised tissue at a microscopic level.

An AI based algorithm, currently in development, will assist the surgeon in pinpointing regions which are suspicious for breast cancer. The surgeon then determines if there is cancer in that tissue, and whether there is a need to remove more, potentially reducing the need for a second or third procedure.

“If there’s a problem, that’s the best time to make sure the problem is dealt with,” Dr. James explains, noting that achieving cancer-free margins is key to decreasing the risk of cancer returning.

He adds, “The current intraoperative imaging methodologies do not reliably give you that microscopic information and that’s where Perimeter comes in. It could basically solve that dilemma.”

He also notes that having to undergo additional surgeries, even if they’re relatively minor and even if they occur within a week or so of the initial procedure, can have negative effects on the cancer patient as well as carrying extra costs and the potential for complications.

“Even that seems to have a long-lasting consequence on how patients feel about their recovery and the prognosis, even though they might be reassured,” Dr. James says.

Removing some of the fear of cancer

Suzanne Foster knows about the physical, mental, and emotional consequences of a breast cancer diagnosis and subsequent treatment. The president of Cardinal Health’s home health division and a member of Perimeter’s board since 2018, she has extensive healthcare and medical device experience and was leading a division at Medtronic that was charged with seeking and evaluating innovative breast cancer technologies when she was diagnosed with the disease in early 2015.

“Because from the time you’re diagnosed to the time that it’s taken out of your body, you just want it out. That’s all you can think about: ‘Get this thing out.’”

— Suzanne Foster, President, Cardinal Health, and Member of Perimeter’s Board.

Foster explains that she was 44 and healthy, had no comorbidities and was confident her body would recover. But as she went through treatment, she realized that more than a physical challenge, dealing with the effects of cancer is an emotional battle.

“Not only do you live in fear of, you know, ‘Am I going to be here for my kids?’, ‘Am I going to survive this?’, there is a real fear of ‘What is my life like? Is the cancer going to come back?’”

Foster, who has become a patient advocate and public speaker, notes that she experienced the first wave of fear when she was approaching surgery. “Because from the time you’re diagnosed to the time that it’s taken out of your body, you just want it out. That’s all you can think about: ‘Get this thing out.’”

Getting a call that not all the cancer was removed, and that another surgery was required “Compounds that emotional ride that you’re on.”

She said the fact that Perimeter offers the possibility that fewer women will receive such a call was one key element that attracted her to the company. Another is that potentially reducing the number of additional surgeries — and, thus, the amount of natural tissue removed from the breast — could mean better cosmetic outcomes for patients.

When any breast cancer survivor checks herself in the mirror, “And she doesn’t have to be reminded she went through that, it allows you to move on with life. Because it takes a lot of years where you don’t wake up every day fearful that it might come back,” Foster says.

Ready to help, ready to grow

Jeremy Sobotta knows Foster’s story is powerful, and that her story is the story of millions of women facing the most frightening time in their lives. The CEO of Perimeter also believes that his company’s technology is a response to an unmet need inherent in that story.

And while the physical and emotional needs of patients are primary in the development of Perimeter’s medical technology, the potential financial impacts are also crucial to Perimeter’s success, Sobotta notes.

For hospitals, each additional operation represents an average USD$16,000 cost increase, according to a 2017 U.S. study — a USD$560-million annual cost to the U.S. health care system — and that doesn’t include potential hard costs to cancer patients, such as insurance co-pays and lost wages. With a mission to reduce re-operation rates, Perimeter’s technology has the potential to deliver substantial savings on a per patient basis.

With Perimeter in the commercial stage of its operation, Sobotta notes that now it’s a question of “Getting our technology into the hands of as many physicians as possible to impact as many patients’ lives as possible.”

In addition, Sobotta explains that the company is developing artificial intelligence (AI) technology, called ImgAssist, helped in part by a USD$7.4-million grant from the Cancer Prevention and Research Institute of Texas, a state government agency.

The company is building a body of clinical evidence under its ATLAS AI Project to further support its commercial launch with a 400-patient study currently underway at leading cancer centers, including MD Anderson Cancer Center and Baylor College of Medicine, to collect images of breast tumors in order to train its AI.

The next steps are to run a randomized, multi-site pivotal study in up to 600 patients to test Perimeter’s ImgAssist AI against the current standard of care to assess the impact on reoperation rates for patients undergoing breast conserving surgery.

Perimeter’s leadership is also optimistic about the potential use of its technology by physicians for areas beyond breast cancer, with the CEO noting the company its Atlas library covers a broad array of example tissue types with which to train surgeons.

As for training its AI to recognize these other tissue types — and, thus, open up a larger market for Perimeter’s technology — “The building blocks are there. The foundation is there.”

Watch the company’s C-Suite interview to learn more about their technology and investment proposition.

Learn even more about Perimeter by visiting their website here.