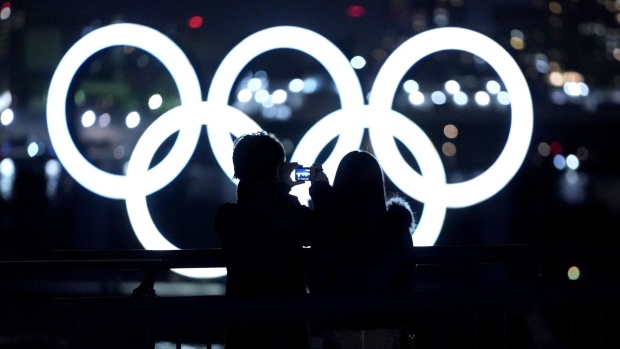 A visitor takes a photograph of illuminated Olympic rings floating in the waters off Odaiba island in Tokyo, Japan, on Thursday, Jan. 14, 2021. While Japan’s infection count has been well below other rich industrialized nations, the pandemic has been a persistent cloud over the Olympics since they were delayed almost a year ago. Photographer: Toru Hanai/Bloomberg , Bloomberg

(Bloomberg) -- The U.S. announced the latest in a longstanding tradition of political boycotts at the Olympics when White House Press Secretary Jen Psaki on Monday said U.S. diplomats would not attend the 2022 winter games in Beijing next year.

The decision, Psaki said, came due to concerns about “the ongoing genocide and crimes against humanity in Xinjiang and other human-rights abuses.” Athletes representing the U.S. are still allowed to compete on the international stage.

Chinese Foreign Ministry spokesperson Zhao Lijian said in a press conference that the move by the U.S. had both offended China’s people and was done prematurely: China has yet to formally invite U.S. politicians to attend the games.

On Tuesday, the International Olympic Committee said in a statement that “the presence of government officials and diplomats is a purely political decision for each government, which the IOC in its political neutrality fully respects.”

The organization also said the Olympic Games, as well as the participation of athletes, is “beyond politics.” Yet the sporting event has regularly been a stage for political action, activism and retribution from individual athletes and countries alike. More recently, protests have happened at the events themselves. This year, the IOC relaxed its guidelines and allowed athletes to engage in activism under certain circumstances, including on the field before the start of a competition. During last summer’s Tokyo games, athletes, once banned from protesting, took knees prior to — and in one instance, during — competition in support of Black Lives Matter and racial justice.

Though viewership dropped 42% during the Tokyo Games from the Rio Games in 2016, historically, the Olympics have served as one of the biggest global stages for politics and activism. Below are some notable events that mirrored global tensions. They had varying degrees of success in their efforts to make change.

American shot putter Ralph Rose also refused to dip the U.S. flag in front of England's King Edward VII during the opening ceremonies, following several perceived slights by Britain against its former colony. The stars and stripes have not been dipped at an Olympic games since.

U.S. athletes almost boycotted the Berlin 1936 Olympic Games to protest Nazi Germany’s anti-Semitism, racism and human rights violations. Adolf Hitler had at that point banned Jewish people from sports clubs. President of the American Olympic Committee Avery Brundage, opposed the boycott, saying that “the Olympic Games belong to the athletes and not to the politicians;" the Amateur Athletic Union ultimately voted against a boycott.

American sprinter Jesse Owens, who was Black, ultimately won four gold medals at the games. However, Jewish American relay runners Marty Glickman and Sam Stoller were ultimately pulled from competing in the 4x100 relay by their coaches. And as the United States Holocaust Memorial Museum notes, Nazis ultimately killed a number of international Jewish athletes who competed in 1936 or in previous Olympic games.

“Those games really set the stage for the Olympics as we know them today,” David Clay Large, author of “Nazi Games: The Olympics of 1936” told Time magazine. “That injection of politics and extreme nationalism, that’s continued. There’s no question that nationalism is a very fundamental part of it all.”

A number of countries formally boycotted the Melbourne 1956 Games, for a variety of reasons.

Egypt, Lebanon and Iraq boycotted the games in light of the Suez crisis that occurred in late October and early November 1956, further cementing the Olympics' status as a global diplomatic stage. China also boycotted the 1956 Games, given that Taiwan, then known as the Republic of China, was allowed to participate — another stand-off in the longstanding “Two Chinas” conflict.

Meanwhile, after the IOC decided not to suspend the Soviet Union following its invasion of Hungary, several countries including the Netherlands, Spain, and Switzerland, boycotted the games. The water polo teams representing Hungary and the USSR would eventually come to blows in a semi-final that is now known as the “blood in the water” match. As the BBC noted, Russian player Valentin Prokopov hit Ervin Zador toward the end of the match. The Hungarian water polo team ultimately won the gold medal, after a match against Yugoslavia.

As a result, the Melbourne games saw fewer athletes than is typical; this was also the first time the modern games had been held outside of Europe or North America, and many delegations could not afford to send their full teams to Australia.

The IOC banned South Africa from the 1964 Tokyo Games because of apartheid. The organization maintained that South African athletes would only be allowed to compete if the country renounced anti-Black racism and discrimination in sports and renounced its own segregation practices. The ban was upheld for decades, and was ultimately rescinded ahead of 1992 Barcelona Games, when the country promised to send a diverse team of athletes to compete.

Ecuador, Indonesia, and North Korea also withdrew their athletes from competition, though not for boycott purposes: Ecuador withdrew on the grounds that several athletes had applied to compete without approval, the New York Times reported, while Indonesia and North Korea withdrew after the IOC decided that several athletes from each team were ineligible to compete given that they had participated in the 1963 Games of the New Emerging Forces, a competition established by Indonesia as a direct competitor to the Olympics.

Whether the 1968 Mexico City Games would be held as scheduled was put into question following the Tlatelolco Massacre, where the Mexican police and military shot into a crowd of student protesters. Despite the unrest, the Games opened on time.

At the games, American sprinters John Carlos and Tommie Smith, who are Black, raised their fists in the air to support the U.S. civil rights movement when they received their medals on the Olympic podium. The two “had talked and we knew we were going to do something,” Smith told Sports Illustrated in 2020. “But nobody knew exactly what Tommie Smith and John Carlos were going to do, including Tommie Smith and John Carlos." They were suspended from the national team for doing so.

The 1972 Munich Games were stressful, almost by default: It was the first time the Olympics had been held in Germany since the 1936 games in Berlin. Yet these Games were ultimately defined by a terrorist attack that targeted members of Israel’s Olympic team.

Eight members of the Fatah movement's Black September faction targeted the apartments where Israeli athletes and coaches were staying; they took a total of 11 hostages and demanded the release of more than 200 Palestinian prisoners who were being held in Israeli jails. “If we should give in, then no Israeli anywhere in the world can feel that his life is safe,” Israel's Prime Minister Golda Meir said in response.

The IOC decided to continue the games amid the crisis. Rescue attempts were unsuccessful, and the 11 athletes and coaches were killed. Olympic organizers formally held a moment of silence for the victims at the 2020 Tokyo Games, after previously denying a request to commemorate the 40th anniversary of the attack in 2012.

“The 1976 boycott not only generated international consciousness for the anti-apartheid movement, but also indirectly induced social and political change," sports historian Courtney Mason wrote in “Onward to the Olympics: Historical Perspectives on the Olympic Games.”

Taiwan also boycotted the games after the Canadian government refused to let them compete as the Republic of China, the New York Times reported.

A total 65 countries boycotted the Moscow 1980 Summer Games, which were held less than one year after the Soviet Union's invasion of Afghanistan. (By contrast, 80 countries competed.) In January 1980, U.S. President Jimmy Carter set a deadline that the Soviet Union would need to pull out of Afghanistan in order to avoid a number of consequences; at the time, Carter said sending athletes would run counter to “the national interest and would jeopardize national security.”Ultimately, the U.S., Canada, West Germany, Israel, China, and other countries refused to send their athletes to the competition. A small group of American athletes attempted to sue the U.S. government regarding the boycott, but lost.

In what President Ronald Reagan said was a direct retaliation against the U.S. boycott of the 1980 Moscow games, the Soviet Republic boycotted the Los Angeles 1984 Games, calling their involvement “impossible.” Thirteen other countries, all of which were controlled by communist governments at the time, joined the boycott. The U.S. ultimately swept the 1984 games, winning 83 gold medals.