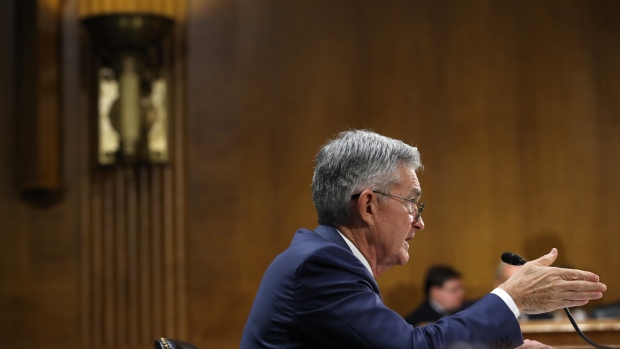 He answers to you. , Photographer: Win McNamee/Getty Images

(Bloomberg Opinion) -- Donald Trump’s persistent attacks on the Federal Reserve raise an important question: What should and shouldn’t presidents say about the central bank? The key is to understand the difference between the concepts of independence and accountability.

It’s crucial that the Fed enjoy independence from elected officials in deciding how to pursue the goals that Congress set out for it -- stable prices and maximum employment. This freedom ensures that the central bank is seen as trying to achieve the best long-term economic outcome, as opposed to working for the re-election of a particular president. President Trump has threatened this perception of independence with his frequent tweets about where the Fed should set interest rates.

That said, while independent, the Fed should still be accountable to the public for meeting its goals. The primary mechanism for ensuring that accountability is the president’s power to appoint (or re-appoint) the central bank’s chair and other senior officials. These are among the most economically meaningful decisions a president makes. Anyone who leads the country — or hopes to — should explain how they intend to make such choices.

What does this mean in practice? It’s bad for Trump to tweet something like “interest rates need to go down by a percentage point soon,” because this could be interpreted as an attempt to undercut the central bank’s independence by getting it to support his re-election bid. But it’s entirely appropriate for him to tweet “if the Fed doesn’t achieve its supposed 2% inflation goal in the next two years, I’m going to have to look for a new Fed chair.” The latter communicates to interested voters how the president will approach the re-appointment process.

The same applies to the Democratic candidates to challenge Trump in the 2020 presidential election. Consider, for example, the question of what level of inflation the Fed should target. Many economists have suggested that a higher target would allow the central bank to combat recessions more aggressively, and hence do a better job of keeping unemployment in check. This could be particularly beneficial for black Americans, who tend to experience bigger spikes in unemployment during economic slumps. Yet the Fed’s current leaders – Chair Jerome Powell and Vice-Chair Richard Clarida – have explicitly stated that they will not consider raising the target.

How would the candidates weigh the inflation issue in deciding whom to appoint to the helm of the Fed? One would expect some of them, such as Elizabeth Warren, to prefer someone who would approach it differently than the current Fed leadership does. Yet they rarely speak about it, or generally about how they intend to wield their appointment power. They should let the public know.

To contact the author of this story: Narayana Kocherlakota at nkocherlako1@bloomberg.net

To contact the editor responsible for this story: Mark Whitehouse at mwhitehouse1@bloomberg.net