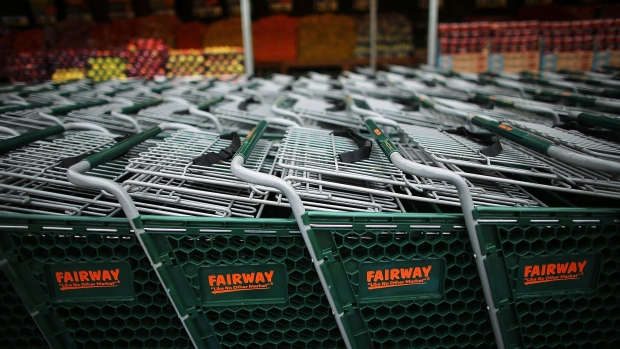 NEW YORK, NY - MARCH 01: Shopping carts stand by the newly re-opened Fairway Market on the waterfront in Red Hook on March 1, 2013 in the Brooklyn borough of New York City. Fairway, which quickly became a popular shopping destination and an anchor in the struggling community of Red Hook, was closed following severe flooding during Hurricane Sandy on October 29, 2012. Like the rest of Red Hook, Fairway has struggled to quickly re-open in a neighborhood that lost dozens of businesses during the storm. The re-opening, which included a ceremony and ribbon cutting featuring Miss America and Mayor Michael Bloomberg, is being viewed as Red Hooks official comeback since the storm. (Photo by Spencer Platt/Getty Images) , Photographer: Spencer Platt/Getty Images North America

(Bloomberg Opinion) -- Have we finally reached the point where we automatically assume that every new retail disaster has been caused by a private equity firm? Yes, I believe we have. When the New York Post published a report on Tuesday contending that New York’s Fairway Market grocery chain was going to liquidate — a claim denied by the company, which subsequently filed for Chapter 11 bankruptcy protection on Thursday — I began exploring whether private equity was indeed responsible for its problems.

The year was 2007. Fairway, a treasured New York institution that was founded in 1933, had grown from one store on Manhattan’s Upper West Side to four stores, three in New York City and one on Long Island. The stores were supermarket size, but they didn’t much resemble a Safeway or a Kroger. They were eclectic, with 50 brands of olive oil, dozens of varieties of olives, cheese, smoked salmon, imported beer and who knows what else. It was quintessential New York. On a per-square-foot basis, the four Fairways were among the highest grossing grocery stores in the country.

Howie Glickberg, the grandson of the founder, was one of three partners who owned Fairway Market. The other two were ready to cash out, and others in management who held small equity stakes were looking for a payday. Glickman needed to find a source of liquidity. Unfortunately for him, he found Sterling Investment Partners, a private equity firm based in Westport, Connecticut, that focuses on mid-market companies.

“I was looking to expand the business,” Glickberg told me when I caught up with him on Wednesday afternoon. In the ensuing buyout, Sterling put $150 million into the company in return for an 80% ownership stake. The majority of that was debt. Needless to say, the debt landed on Fairway’s books, not Sterling’s. Three Sterling partners, including co-founder Charles Santoro, joined the board. None of them had any grocery experience.

Sterling had enormous ambitions for the company. Glickberg had envisioned expanding slowly, a store at a time. Santoro talked about turning Fairway into a national chain with hundreds of stores that would compete with Whole Foods and Trader Joe’s. Santoro did not respond to an email request for an interview.

By 2012, Fairway was up to 12 stores, including some in suburban New Jersey, where the company’s urban cachet didn’t necessarily translate. Most of this expansion was fueled by yet more debt. Not surprisingly, the expansion eviscerated the company’s profits while adding millions more in debt to its balance sheet. By 2012, its debt burden had grown to more than $200 million, and it was losing more than $10 million a year.

Badly in need of cash, Sterling turned to the public markets. In April 2013, Fairway Group Holdings Corp., as the company was now called, went public at $13 a share, raising $177 million. Its prospectus said that the money would go toward “new store growth and other general corporate purposes.” But that wasn’t quite accurate; the prospectus showed that more than $80 million went to pay “dividends” to preferred shareholders — i.e. Sterling Investment Partners. An additional $7.3 million went to management.

Around the same time as the IPO, Glickberg was pushed aside and a new chief executive officer was brought in, an accountant who had been an executive at Grand Union, a grocery chain that failed in 2013. Glickberg did stay on the board, however, where he was the only person with either grocery or retail experience.

By 2014, Fairway was up to 15 stores. Its directors — a number of them Sterling executives — were paying themselves absurd amounts of money: $12.1 million in 2013, according to the company’s 2014 proxy. Santoro alone took down $5.4 million that year — at a company with a market cap below $170 million.

And that wasn’t the only problem with how Fairway was being run. Hannah Howard, Fairway’s former director of communications, would later describe what it looked like from the inside:

[T]he place was kind of a mess: It took months to get paid, with leadership claiming paychecks had been lost on the truck to Red Hook. As expansion scaled, finding talented, knowledgeable staff became more difficult, so quality at new locations began to suffer. It became increasingly apparent that Fairway’s corporate leaders were good at running two or three stores, but they didn’t make the right preparations to run a dozen. “There were not processes or systems in place that were scalable,” says one erstwhile executive. “The leadership was completely incompetent.”

Meanwhile, Whole Foods and Trader Joe’s were expanding methodically. When Amazon Inc. bought Whole Foods, it meant that Fairway had a competitor with limitless cash. Fairway’s vaunted revenue-per-square-foot numbers dropped by a third. Cash flow was consistently negative. The stores looking increasingly shabby because the company couldn’t afford to keep them up. By 2016, saddled with $267 million in debt, Fairway filed for Chapter 11 bankruptcy protection. It hadn’t turned a quarterly profit the entire time it was a public company.

Here perhaps is the strangest part of the story: Although Fairway managed to reduce its debt by $140 million through the bankruptcy process, it didn’t use bankruptcy to close stores or break any of its expensive leases ($6 million alone for the flagship store on the Upper West Side). It didn’t try to go back to what it was, a small chain of groceries that were part of New York’s central nervous system. Meanwhile, Sterling Investment Partners, having milked Fairway for nine years, walked away. Another private equity firm, the Blackstone Group Inc., took over. Glickberg retired.

By August 2018, Blackstone had exited and the company had been bought by two other private equity firms: Brigade Capital Management LP and Goldman Sachs Group Inc. In November, they hired a new CEO, a turnaround specialist named Abel Porter, who actually did have grocery experience. He was the company’s fourth CEO in six years.

“We’re not burning cash, we’re accumulating cash,” Porter told Bloomberg News at the time. He added that there was “no risk of running out of capital” despite a debt level that exceeded $300 million. In that same article, however, a credit analyst for Moody’s Investment Service, Mickey Chadha, predicted that Fairway would need to be restructured again within 18 months. More money was going out the door than was coming in.

Chadha’s prediction was off, but not by much. It’s been 14 months since that article ran, and Fairway is once again in deep trouble. When I asked him how he saw it coming, he laughed. “That’s my job,” he said. “You could see it when you looked at their liquidity. They just weren’t generating enough cash. No free cash flow, and lots of debt. It was highly predictable.”

A few months ago, Chadha updated his analysis of Fairway’s bonds. He said that, as of June, the company’s remaining cash was down to $10 million and he predicted that it would continue to dwindle through 2020. “The company,” he concluded, “has limited alternative sources of liquidity as virtually all tangible and intangible assets are pledged to the credit facilities.”

As part of its bankruptcy plan, Fairway agreed to sell five stores and a distribution facility to Village Supermarket Inc. for $70 million. Village Supermarket is another grocery chain owned by a family, the Sumas family of New Jersey. It seems to have done what Sterling Investment Partners could not: expand sensibly. The company now has 30 stores. If a handful of Fairway stores end up being run by the Sumas family, it will have saved an institution that private equity nearly destroyed.

“I’m upset about what happened,” Glickberg told me. “They made a lot of bad decisions. They brought in people who knew nothing about the business and nothing about New York. My grandfather started the company, so it was more than a business to me.”

I guess one moral of this story is that if you run a family company, don’t sell it to a private equity firm unless you don’t care what happens afterward. But mainly, it reaffirms what we are all coming to realize: private equity firms like Sterling Investment Partners aren’t on the side of the companies they buy. Not really. They’re out for themselves.

To contact the author of this story: Joe Nocera at jnocera3@bloomberg.net