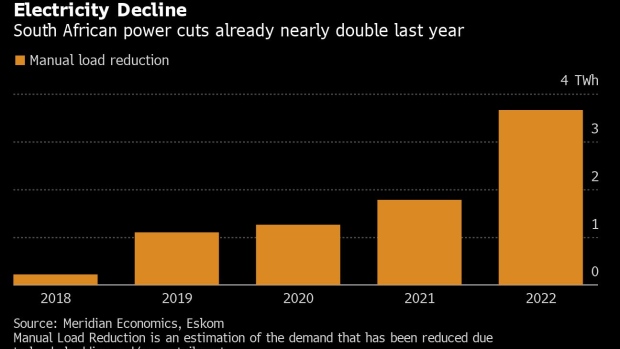 Commercial buildings on the city skyline at dusk in central Cape Town, South Africa, on Thursday, April 21, 2022. South Africa’s state power utility Eskom Holdings SOC Ltd. warned the country may have more than 100 days of electricity blackouts this year because of outages at its power plants. Photographer: Dwayne Senior/Bloomberg , Bloomberg

(Bloomberg) -- South Africa, which has been experiencing energy shortages since 2008, is in the throes of its worst power cuts on record as breakdowns at state-owned utility Eskom Holdings SOC Ltd.’s plants reach unprecedented levels.

The blackouts have caused disruptions countrywide, illustrating the challenges Europe could face as it confronts acute power shortages of its own.

Here’s how some key services have been affected:

Most hospitals have backup electricity, but generators don’t always kick in immediately and sometimes malfunction, placing patients at risk. Among the most vulnerable are those in intensive care and babies in incubators. State facilities have burnt through their budgets because they’ve had to run their generators for longer than anticipated and they intend to ask the National Treasury for additional funding, according to Health Minister Joe Phaahla.

Municipal and provincial authorities and water utilities have urged consumers to cut back on their water usage, because the lack of electricity means pump stations can’t always operate at full capacity. Generators have been fitted at most wastewater and sewage-treatment plants, though the risk of spills is high if they malfunction.

Mobile-phone companies have invested a fortune in batteries and generators for their towers, but the backup electricity they provide isn’t always sufficient to last through extended blackouts. Stop-start outages also mean batteries can’t fully recharge and shorten their lifespans. As a result, mobile phones’ signals aren’t always reliable.

The blackouts make it easier for criminals to operate undetected, and harder and more dangerous for the police to apprehend them. Insurance companies have reported an increase in claims for car and home break-ins. Private security companies have warned that battery backups on alarm systems can be rendered useless as a result of the unreliable power supply and urged clients to check them regularly. Thieves have also taken advantage of the outages to steal the copper cabling used to transmit electricity, leaving some homes and business without supply for weeks on end.