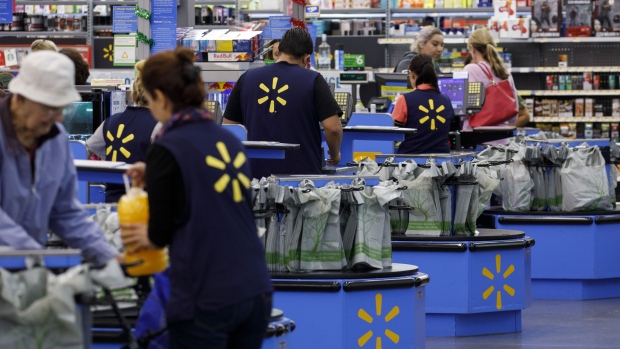 Cashiers ring up shoppers at a Walmart Inc. store in Burbank, California, U.S., on Monday, Nov. 19, 2018. To get the jump on Black Friday selling, retailers are launching Black Friday-like promotions in the weeks prior to the event since competition and price transparency are forcing retailers to grab as much share of the consumers' wallet as they can. , Bloomberg

The pandemic and its economic fallout are going to make it exceedingly difficult for retailers to have a merry Christmas. The industry is expected to see an uptick in seasonal sales of a measly 1 per cent to 1.5 per cent, according to a forecast released Tuesday by Deloitte, which would be well below the 4.1 per cent increase the industry recorded last year.

New shopping patterns that are a reaction to COVID-19 have rendered retailers’ old holiday playbooks useless.

Big names such as Walmart Inc. and Best Buy Co. have already acknowledged as much by announcing that they will close their brick-and-mortar stores on Thanksgiving, the day that has served as the kickoff for Black Friday deals for the last decade or so. Macy's Inc., which aims to whip up seasonal cheer with its annual Thanksgiving Day Parade, has announced the festivities will be reworked for a mostly television audience.

The essence of the big chains’ challenge is this: Given pandemic-related health concerns, they need to figure out how keep their stores from getting crowded – on Black Friday, especially, but also on weekends and other busy days – without sacrificing too many potential sales. Here are my ideas for retailers to have a safe, socially distanced Black Friday and holiday season:

More online-only deals: A year ago, I would have said offering online-only deals was retail malpractice.  Customers – particularly a store’s most loyal ones – often shop that brand both in-person and online. They might notice price differences and feel they had gotten a raw deal.

For the most part, retailers should still maintain price consistency across channels on most of their merchandise, but for some products that are big draws on Black Friday – think 4K televisions, kitchen appliances, a hot line of kids’ toys – they could make some of the so-called doorbuster discounts available only to online shoppers.

If retailers make it known in Black Friday ads and circulars that the best savings are going to be online, they might succeed in thinning the crowds that day at their brick-and-mortar locations. Against the backdrop of the pandemic, I expect this won’t alienate many would-be in-person customers, but will be viewed as an understandable effort to keep everyone safe.

Let shoppers pick their own Black Friday: To keep stores from getting packed, retailers need to create strong incentives for shoppers to start holiday spending earlier and to do it on non-peak days. With that in mind, I recommend they dangle something along the lines of Nordstrom Inc.’s Double Points Day.

As the name suggests, it means a shopper that is a member of its loyalty club gets to pick a certain day (or days, depending on what tier of the program she’s in) anytime throughout the year in which she gets more rewards points on a purchase than she otherwise would.

Retailers could enact a seasonal version of that — offering either extra loyalty program rewards or one-time only discounts — on any single day of the customer’s choosing in October through January. That way, a customer can make her own Black Friday of sorts on a slow weeknight, reducing the need to clog up stores on typically busy shopping days.

Rethink in-store traffic flow: Retailers are already making smart choices to ensure that people who do shop in person feel safe when they are doing so. TJX Cos., for example, has removed some fixtures to free up space, while At Home Group Inc. has made its aisles one-way.

Big chains could go a step further during the entire holiday season, temporarily repurposing less busy parts of the store. I imagine department stores won’t be selling as many cocktail dresses or men’s suits this November and December as in previous years, so some of that square footage could be used for racks of lounge wear or workout gear, allowing visitors to be more spread out while they trawl those items.

Victoria’s Secret has said it is exploring mobile checkout set-ups to prevent clumps of people forming near its cash registers, a move other retailers would be wise to embrace. Also, stores such as Target Corp. that have both in-store counters and curbside pickup for online orders should nudge customers at checkout to opt for the curbside option. That will reduce the number of people queuing in stores but offer much the same convenience. 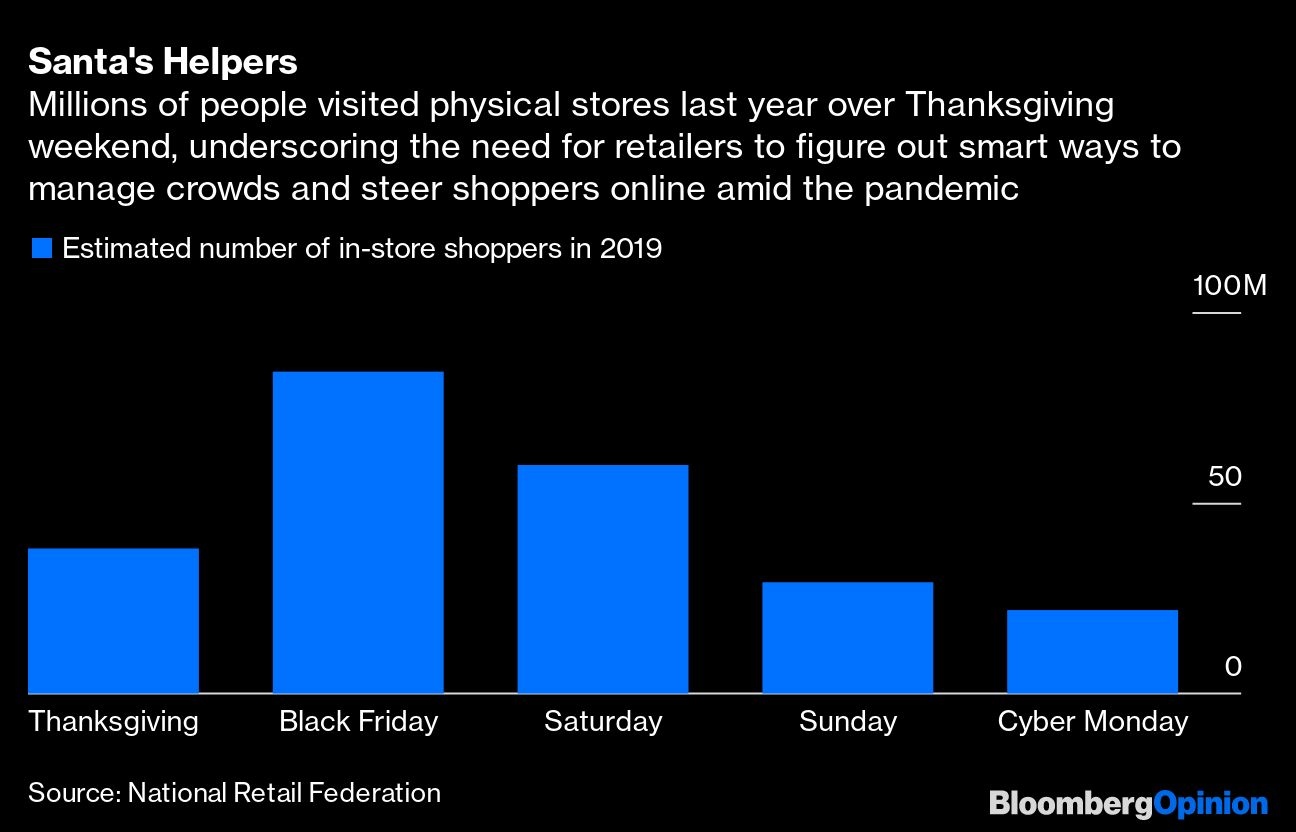 Lengthen the return window: Adhering to social-distancing guidelines will mean restricting the number of customers who can be in a store at once. That will be a challenge for all retailers, but particularly so for specialty shops with relatively small store footprints.

The last thing a store manager wants in, say, late December, is for one of those spots to be taken by someone who is simply making a return. Chains should consider loosening their return policies to give people more time to seek refunds on unwanted items, hopefully steering them to do so in January or February when gifting sprees are over.

Offering a longer period for returns could also ease pile-ups in their e-commerce fulfillment centers, letting warehouse workers focus on getting new orders out the door. That will be especially important given how much seasonal spending is expected to take place online this year. Deloitte forecasts that holiday e-commerce sales will soar 25 per cent to 35 per cent, much stronger than the 14.7 per cent increase recorded in 2019.

Incentivize slow shipping: It’s likely going to be difficult for some retailers to keep up with the crush of orders on peak days at their e-commerce warehouses.

One way to do that would be to experiment with rewarding shoppers for choosing slow shipping. Maybe, for example, a value-oriented chain such as Old Navy or Kohl’s Corp. could offer an extra US$5 off an online Black Friday purchase if the customer opts for shipping that puts it on the customer’s doorstep in 10 days instead of two or three days. In this gloomy economic moment, I suspect many people would jump at the offer.

In turn, that could give retailers breathing room to fulfill orders, and the more demand they can satisfy online, the easier time they’ll have preventing crowding in their physical stores. Of course, online purchases are often less profitable than in-store ones, but in these strange times, retailers need to prioritize hanging on to their loyal customers in whatever format those buyers prefer.

No matter what retailers do, holiday shopping is going to be dramatically different this year.  The best the giants of the industry can do is fortify their e-commerce operations and do whatever they can to keep brick-and-mortar stores from turning into scenes of snaking lines and shoulder-to-shoulder gift-grabbing that scare shoppers away or, worse, endanger them.