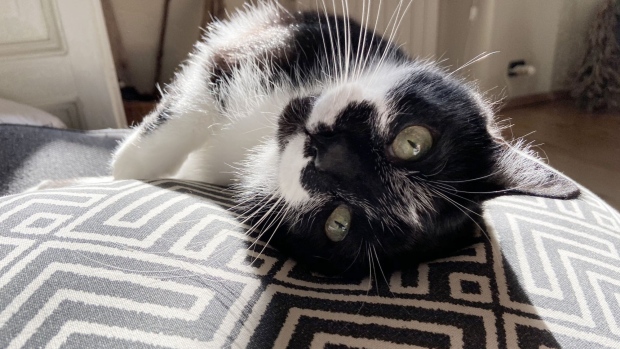 (Bloomberg Opinion) -- Back in mid-April, I took my 13-year-old cat to the vet for some tests. They told me his chronic heart disease had worsened, but it was nothing alarming. His condition started to deteriorate a few days later, ultimately leading to a 3 AM trip to the emergency room on April 27. The emergency veterinarians told me his blood readings were baffling; X-rays showed blood clots in his lungs. He died later that day.

At first it just seemed like one more sad thing to cope with during this time of Covid-19 — then, last week, I got a call from virologist David Sanders of Purdue University. He wanted to tell me about a new paper showing Covid-19 infections in cats. He said it looked like high-quality work, and could have important implications for the spread of the virus. I started to wonder whether my own cat had picked up Covid-19 while waiting with other cats for his check-up at the vet’s.

The anecdotes about Covid-19 infecting cats at first seemed like a side show. But now, scientists have determined that the virus spreads readily among cats. That means scientists will need to start doing epidemiological studies on other species to understand and control this virus.

University of Wisconsin biologist Peter Halfmann, a co-author on the cat paper, says his research was inspired by anecdotes they’d heard — the most striking one being that a caretaker apparently infected multiple tigers at the Bronx Zoo. They were worried about cats in shelters, veterinary clinics and humane societies.

They set out to investigate with an experiment, the results of which have recently been published in the New England Journal of Medicine. They infected three cats with Covid-19 and paired each with a virus-free cat. These partner cats tested positive on day three, day five, and day six. None of the cats developed any symptoms of the illness, he says. But the disease could be dangerous to a cat that was older and had comorbidities, like his own cat. And, I thought, like mine.

David Goldberg, a professor of epidemiology and veterinary medicine at the University of Wisconsin, said that it’s not uncommon for diseases to bounce around between species. Ferrets are often victims of human flu viruses, for example. When people bring sick ferrets to the vet, they often appear to have the same cough and runny nose as their pets.

Sometimes a virus can be deadlier to another species than it is to us — just as SARS-CoV2 is likely deadlier to us than to the animal it came from. For example, Goldberg recently published a preprint paper warning that great apes have the same cell receptor we do that allows the virus into our cells. In a news article in Science, he warns of the serious danger Covid-19 might pose to endangered great apes.

Other coronaviruses have spread to chimpanzees and killed them, even though they only gave humans a mild cold. Camels became an integral part of the MERS crisis, and civet cats tested positive for SARS in China.

The civet cat’s story shows another risk for animals: that humans will blame and victimize them. That’s happened before, as noted in David Quammen’s book “Spillover: Animal Infections and the Next Human Pandemic.” In the chapter on the 2003 SARS epidemic, he describes how the Chinese health authorities originally thought, probably wrongly, that people had gotten the disease from a civet cat.

“More than a thousand captive civets were suffocated, burned, boiled, electrocuted and drowned,” writes Quammen. “It was like a Medieval pogrom against satanic cats.”

Further work showed it was a different animal altogether — a tiny brown bat — that harbored the original SARS virus.

Similarly, early on Covid-19 was associated with an armadillo-like animal called a pangolin, but Goldberg says pangolins did not give us this disease. The association comes from the fact that pangolins carry a different coronavirus which has one part that’s nearly identical to SARS-CoV2. Goldberg says pangolins are gentle creatures who need more positive press. “We shouldn’t start persecuting pangolins,” he says. Bats are now the prime suspect as the source of Covid-19.

Figuring out the role any animal plays in a human virus is difficult. The exact role of civets in SARS is still unclear; some people think they may have played some part in the spread of the disease even if they weren’t the primary hosts.

While there’s clearly a lot of uncertainty here, Halfmann said I wasn’t crazy to worry that my cat died from Covid-19, and that it would be possible to pick it up at a veterinary clinic. Neither the cat nor I had been anywhere else for days.

He says it might be smart to keep cats indoors, and for veterinarians to take precautions to protect their patients from spreading the virus to each other. And he says that the cats may more easily transmit the virus to other cats than to humans. Any threat they or other animals pose to us is likely very small compared to the threat we could pose to them.