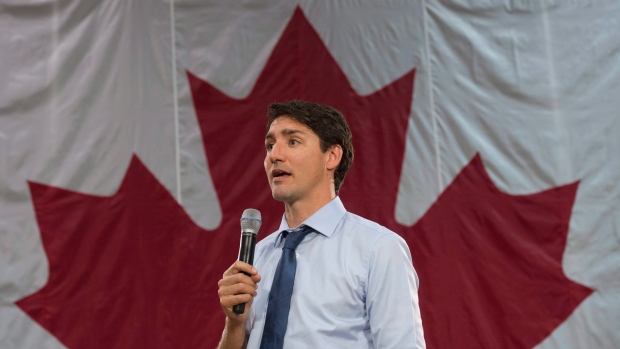 Justin Trudeau is pitching Canadian oil and gas to global investors just as one of the world’s largest oil and gas players is all but abandoning the space.

The timing for the Prime Minister really could not be worse. He is the first-ever sitting head of Canadian government to address the prestigious annual CERAWeek conference, but as he prepares to deliver a keystone speech in Houston on Thursday evening, news broke Thursday morning that Royal Dutch Shell (RDSa.N) is selling the vast majority of its oil sands assets to Canadian Natural Resources (CNQ.TO) for US$8.5 billion in cash and stock.

“Oil sands… operations are no longer a strategic fit for Shell,” Michael Crothers, Canadian country chair of the Anglo-Dutch giant, told reporters on Thursday shortly after the historic transaction was announced.

Compounding the challenge facing Trudeau is the fact Shell isn’t the first of the global supermajors to make a dramatic exit from the oil sands business; which, despite significant cost reductions in recent years, remains one of the most expensive places on the planet to produce crude oil.

French energy giant Total has stayed on the sidelines of the oil sands ever since it shelved plans for a new $11-billion mine in 2014, shortly after prices slipped below US$100 per barrel. Norway-based Statoil (STO.N) sold its entire oil sands portfolio in late 2016 to Athabasca Oil for $832 million. And, just last month, ExxonMobil (XOM.N) was forced to announce the largest writedown of its reserves in the company’s history, with the entirety of the cut coming from the company’s recently-completed $20-billion Kearl oil sands mine. 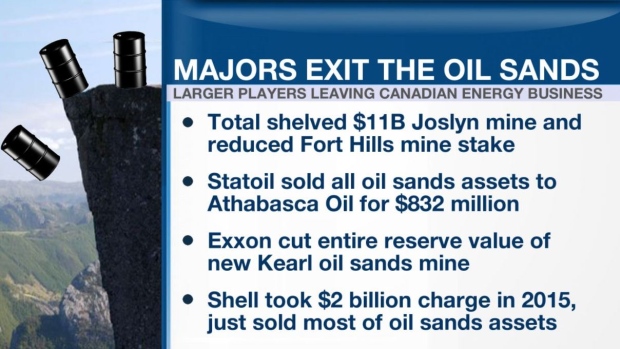 Increasing threats of protectionism from the proposed policies of the new president of the United States also loom large for the world’s foremost energy investors. In a slide presentation outlining the specifics of the deal, Canadian Natural Resources noted the “majority” of the output from its newly acquired Shell upgraded would be “sold in local markets.”

If the U.S. imposes a border adjustment tax on all imports, as is currently favoured by Congressional Republicans, Canadian oil producers who sell to U.S. refineries would find themselves at a competitive disadvantage. Those who sell their raw products to be refined and used within Canada domestically, however, have the clear ability to avoid even the potential of a more protectionist American trade policy.

Who comes out on top in the US$8.5B Shell-CNRL deal?

Then there is the jobs issue that must be top of mind for Trudeau. Crothers said “almost all” of the roughly 3,100 former Shell and Marathon Oil employees who will be joining Canadian Natural Resources as part of the transaction will remain employed. Despite that pledge, Canadian Natural boasted on Thursday of its ability to find “efficiencies” as it assumes control of Shell’s assets, which analysts tend to interpret as layoffs.

In addition to his keynote address, Trudeau will also be accepting an award for environmental leadership from the conference organizers. That highlights what is perhaps the most significant challenge facing the prime minister in Houston: He faces pressure to reassure the world’s most powerful energy players that his government still supports the oil sands even as Ottawa tries to steer the country towards a low-carbon economy.

“If Canadians and their governments want to develop resources, then [Shell leaving the oil sands is] a loss because we do need capital injected into the country for that,” said Robert Fitzmartyn, managing director of institutional research at FirstEnergy Capital, in an interview with BNN. “We need capital -- and foreign capital -- to continue to be invested in the space.”