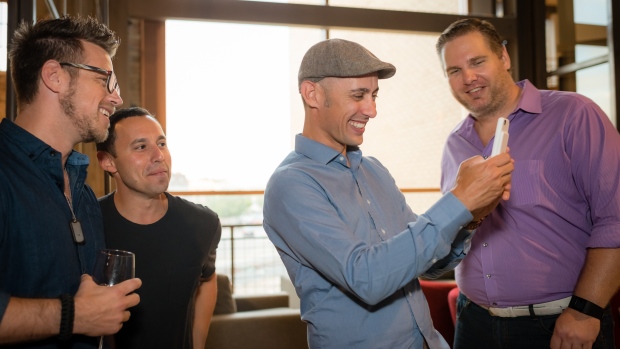 WATERLOO, ONT. - There is a technology renaissance spreading through Waterloo, Ont.

Along a torn-up road destined for light rail transit tracks in the city’s downtown core, Canadian e-commerce company Shopify has made a new home in what used to be entrepreneur Joseph E. Seagram’s 19th-century whiskey distillery.

BlackBerry, formerly known as Research In Motion, may have put the southwestern Ontario city on the computer engineering map; but these days, the torch of shaping the city’s tech future seems to at least partly lie in Shopify’s hands.

“I think there’s really a deep renaissance happening in Kitchener-Waterloo where companies are starting here – and if we can be a role model in that capacity, that’s great for us.”

It wasn’t always this way. The role of Canadian tech leader was never one that Shopify coveted. In fact, Shopify chief executive Tobi Lütke admits it’s a status that the Ottawa-headquartered company has taken on “reluctantly.”

“I don’t think it’s exactly a role we wanted to play,” Lütke said in a conversation with reporters at Shopify’s Waterloo office. “One thing to understand about Shopify is that we’re really comfortable being in the background. Actually, the entire success of the company is [based on doing] that.”

But its May 2015 initial public offering changed everything. With more than 1,500 employees and offices in Ottawa, Montreal, Waterloo, Toronto and San Francisco, today Shopify has risen as a voice for Canada’s tech scene and a beacon for other startups considering going public.

SNOWBOARDS TO THE SPOTLIGHT

Lütke and co-founder Daniel Weinand first launched the company as a snowboard retailer in 2004, only to find out that its retail platform was a much-needed product for online businesses. Since then, Shopify has “made a very conscious decision” to not concern itself with promoting its own name too much, Lütke said.

The Ottawa-headquartered firm – which develops software for online stores and retail point-of-sale systems for small businesses and brands like the Los Angeles Lakers and Kim Kardashian – chose to keep its own logo hidden, in favour of allowing its merchants’ brands to shine.

“Some people have argued that this is a decision Americans would be incapable of doing, and so this is why Shopify is a Canadian company,” Lütke said.

Since raising US$131 million in its IPO in May last year, Shopify shares have risen more than 145 per cent from the IPO price of US$17 on the New York Stock Exchange based on Thursday’s closing price.

Shopify has been closely watched by investors and other companies seeking to go public – something that the executive team has felt it needs to answer for.

Finkelstein, Shopify’s COO, said that after he and Lütke returned from the IPO road show, they told several Canadian business leaders on a video conference which bankers and lawyers they used, and shared details of their dual-listing in New York and the Toronto Stock Exchange.

“We said, ‘Look, here’s a summary of everything we learned, the mistakes you shouldn’t make – here’s everything,’” Finkelstein said.

“I don’t know any company in the U.S. that would do something like that because it’s fundamentally more competitive.”

In helping to shape Waterloo’s tech landscape, Finkelstein said the company has bucked the usual trend of focusing recruitment on engineering talent.

“We initially decided to come to Waterloo because we were looking for sales talent that had a deep interest in technology,” he said.

Its new Waterloo office – once occupied by former BlackBerry co-CEO Jim Balsillie’s Centre for International Governance Innovation – is home to Shopify Plus, the company’s e-commerce services for large volume retailers like Budweiser, Drake and Tesla.

The current 110-strong staff are a mix of sales, engineering, user experience and human resource workers – and there are plans to hire another 200.

What has also thrust Shopify into the spotlight is Canada’s new Liberal government, which Lütke says “is very interested in talking to tech” and has prioritized innovation on its economic agenda.

In February, just before the release of the federal budget, Lütke made headlines after criticizing the Liberal government’s proposal to fully tax stock option gains exceeding $100,000, part of the party’s pledge to hike taxes paid by the wealthiest Canadians.

The Shopify CEO warned that the move threatened to hamper early-stage companies' ability to recruit and retain employees. And, in the end, Lütke and other Canadian startups got their wish after the Liberals’ scrapped the plan in their March budget.

“As much as I don’t want to, being out there and talking about the experience we’ve had – it actually inspires people,” Lütke said.

One of the biggest points of contention for Lütke is the tendency of Canadian startups selling their companies too early, he said.

“This is just maddening to me… It usually comes down to a lack of self confidence in what they could become. There’s not exactly a lot of examples of that happening around them,” Lütke said.