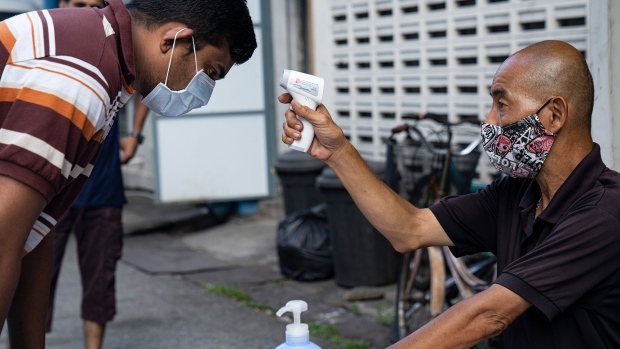 In the early days of the coronavirus pandemic, Singapore was a global standard bearer for taming the deadly illness. Now it’s home to Southeast Asia’s largest recorded outbreak and is racing to regain control.

One reason behind this reversal can likely be traced back to six days in February, when the earliest sign of what would become an explosion in cases among migrant laborers first appeared. It’s a cautionary tale of how even countries experienced in handling epidemics can be wrong-footed by this elusive disease, particularly when it takes root in disadvantaged communities.

In early February, Singapore had a low-level outbreak that it was containing effectively without disruptive measures like closing schools. It was being globally lauded for its calm, measured approach to the virus.

Around the same time, a 39-year-old Bangladeshi national, one of an army of almost 1 million foreign laborers in Singapore, developed symptoms of the coronavirus. 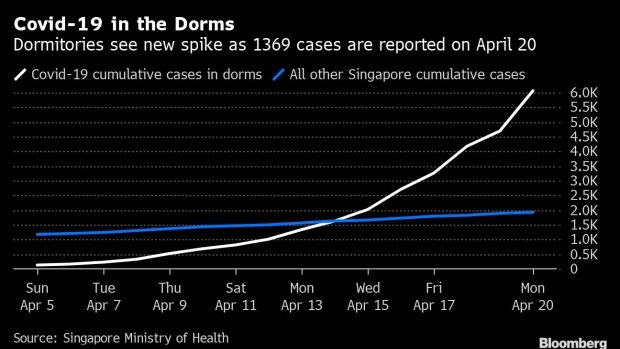 In the days after he fell ill, the laborer visited a clinic and a hospital for help, only to be sent home each time. Home for the worker was a dormitory where men sleep about 10 to a room, sharing toilets and cooking facilities.

He also visited the Mustafa Centre, a 24-hour shopping mall popular with migrant laborers and locals alike. It wasn’t until Feb. 7 that he was admitted to hospital and a day later, tested positive for the virus.

The Bangladeshi was Singapore’s patient number 42, and the first apparent case among low-wage foreign workers in the city’s housing dormitories. Infections among migrant laborers now account for more than 70 per cent of the country’s 9,125 infections, and Singapore is seeing record daily increases in its tally, with new cases exceeding 1,000 on Monday and Tuesday.

The country didn’t record its first deaths until late March, but fatalities now stand at 11, and its less socially restrictive strategy has been replaced by a partial lockdown that’s being tightened and extended until June 1.

Many governments have been caught out by the unexpectedly infectious pathogen, with opportunities for early containment lost as patients were sent home instead of being immediately tested and quarantined.

But unlike other Asian nations such as South Korea, some health experts say Singapore was slow to revise a response plan honed during its experience in 2003 with Severe Acute Respiratory Syndrome, or SARS.

That strategy saw the nation focus on hunting down people who had come into contact with an infected person, a classic public health approach known as contact tracing.

Covid-19 -- highly contagious and manifesting in some with little or very mild symptoms -- has turned out to be “nothing like SARS,” said Jeremy Lim, an adjunct associate professor at the National University of Singapore’s Saw Swee Hock School of Public Health.

“The old playbook has to be thrown out and a new one written,” he said. “The difficulty for countries including Singapore is that one needs to write the playbook as they execute measures. It’s like the metaphor -- fixing an aeroplane’s engine while mid-flight.”

The case of Singapore’s Patient 42 shares similarities with that of a patient in South Korea who triggered a turning point in that country’s epidemic, which has exceeded more than 10,000 cases.

Ten days passed between South Korea’s Patient 31 going to a hospital with symptoms, and when she was finally quarantined. In the days between, the woman, a member of a religious sect, attended services where people worshiped sitting on the floor, elbow-to-elbow for two hours at a time.

Until then, South Korea was -- just like Singapore -- testing people found through contact tracing. But faced with an explosive outbreak within a group that has more than 200,000 worshipers, Korean officials rapidly pivoted to a strategy known as community testing: it compelled church leaders to hand over a list of its members and began testing them all, regardless of whether they showed symptoms or had had contact with an infected person.

Because of its rapid pivot to community testing, South Korea’s epidemic spiked quickly but also ebbed rapidly. It managed to slow the growth of infection by early March and never had to institute a lockdown.

Hong Kong also widened its virus response beyond contact tracing to include community testing as it became apparent the coronavirus was different from SARS, where those infected fell seriously -- and obviously -- ill.

After the emergence of Patient 42, Singapore didn’t appear to immediately undertake large-scale community testing within the foreign labor community, despite their living conditions being favorable to the spread of infectious disease and calls from worker advocacy groups.

The country tested and quarantined 19 people who were in contact with the worker and asked companies that operate the often cramped dormitories to undertake more cleaning and take residents’ temperatures.

Singapore’s Ministry of Health didn’t respond to questions on how many foreign laborers were tested in the weeks after Patient 42, but officials’ comments indicate that large-scale community testing didn’t start until much later.

During a briefing on April 14 -- by which time hundreds of infected workers were being discovered almost daily -- the health ministry’s director of medical services, Kenneth Mak, said some 1,500 workers had been tested and there were plans to test 5,000 more. More than 200,000 of the laborers, many of whom toil on Singapore’s construction sites, live in the dormitories.

Singapore’s early public rhetoric indicated a reluctance to test widely, with a focus on those with symptoms to avoid wasting tests.

On March 10, Mak said that “community testing for all people, irrespective of whether they have symptoms or not, will generate a lot of activity” but have a low yield.

Low-wage foreign workers comprise a fifth of the overall population in Singapore, but largely live separate from the local community. The dormitories -- where clogged toilets and overflowing rubbish chutes have been reported -- are a far cry from the country’s glitzy skyline showcased in Hollywood blockbusters like “Crazy Rich Asians.”

This is not the first time that an infectious disease has hit Singapore’s foreign workers, who earn as little as $18 a day.

In 2008, some were infected in an outbreak of chikungunya, a disease carried by mosquitoes that triggers debilitating joint pain. Their dormitories lacked ventilation and insect screens.

In the same year, a worker who subsequently died from chicken pox spread it to 10 others and the dormitory director was eventually sentenced to jail. Singapore has dozens of worker dormitories, which are operated by private companies like Keppel Corp. and Centurion Corp.

“It’s hard to explain why the authorities did not up the ante in terms of infection controls at the dorms -- perhaps there was a policy blind spot with the focus being on Singaporeans,” said Eugene Tan, a political commentator and law professor at the Singapore Management University.

But “in public health, the migrant workers are very much a part of the community, and the early vigilance against community spread did not embrace the foreign workers.”

Singapore is now entering the third week of a partial lockdown it calls a circuit breaker. Social gatherings are banned and only essential businesses are allowed to operate. Schools are now shut, as well.

The implementation has been unusually bumpy for a country used to being lauded as efficiently run and whose citizens are known to be law-abiding. The penalty for flouting new social-distancing rules on the first offense went from a warning to a $300 fine within days, and just before the lockdown started, the government banned all personal gatherings after earlier only prohibiting those of more than 10 people.

“The many changing instructions -- sometimes a few times a day -- doesn’t give confidence that we’re indeed gold standard,” said Inderjit Singh, a former Member of Parliament with the ruling People’s Action Party.

National Development Minister Lawrence Wong told reporters April 14 that Singapore adjusts its measures based on the circumstances: “Our posture has not changed, our strategies, our approach has not changed,” said Wong, who co-chairs a ministerial task force to tackle the virus.

Singapore says it’s now aggressively testing in the foreign laborer community. It is also accelerating the construction of some worker dormitories and has shifted thousands of healthy laborers working in essential industries to temporary housing facilities that offer more space.

These include vacant military camps, public housing units and lodgings built out at sea commonly used in the marine industry.

Manpower Minister Josephine Teo has said that the standard of living in dormitories should be bolstered. Doing so over the objection of employers who must bear the higher costs is “not only the right thing to do but also in our own interests,” she wrote in a Facebook post on April 6.

With new cases exceeding 1,000 for a second day on Tuesday, Prime Minister Lee Hsien Loong addressed reporters. He said most of the migrant worker infections being discovered are mild cases and vowed that the government would look after their health, welfare and livelihoods.

As for Patient 42, his condition is now stable after two months in intensive care on a ventilator, but he missed the birth of his first child while in the hospital. The advocacy group Migrant Workers Centre said on April 16 in a Facebook post: “He is able to breathe on his own and will require speech therapy moving forward as part of his recovery process.”

--With assistance from Rachel Chang, Kevin Varley and Joyce Koh.