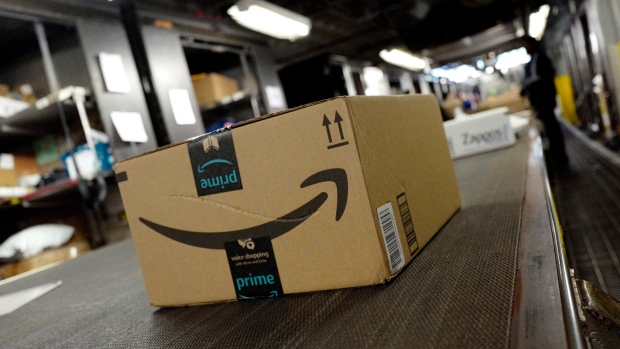 In this May 9, 2017, file photo, a package from Amazon Prime moves on a conveyor belt at a UPS facility in New York. , AP Photo/Mark Lennihan, File

Diapers.com, the online delivery service, made one critical error. It rocketed to success in a field dominated by Amazon.com Inc.

Sales by the parent company, created in 2005 by Marc Lore and Vinit Bharara, grew to US$300 million by 2010, prompting an unwinnable war of price attrition with Amazon and the inevitable buyout offer the founders couldn’t refuse. Lore and Bharara became wealthy, but by 2017 the business was quietly closed and its 260 workers fired. Any competition the company may have provided Amazon was gone for good.

The triumph of Diapers.com might have become a business-school case study. Instead, its demise offers a lesson: In a wide variety of industries, might makes right.

As market share narrows to a handful of behemoths, some economists see the ruthless efficiency of capitalism at work. Others, however, warn of an increasing lack of competition, reduced incentive to innovate, depressed wage growth and higher profits going to fewer people, leaving many behind. Some blame failures of regulation, others cite antiquated antitrust rules. They say humongous companies are no good for the economy.

“A world without regulation means you’re either at the table or on the menu,” said Roni Michaely, a University of Geneva professor. 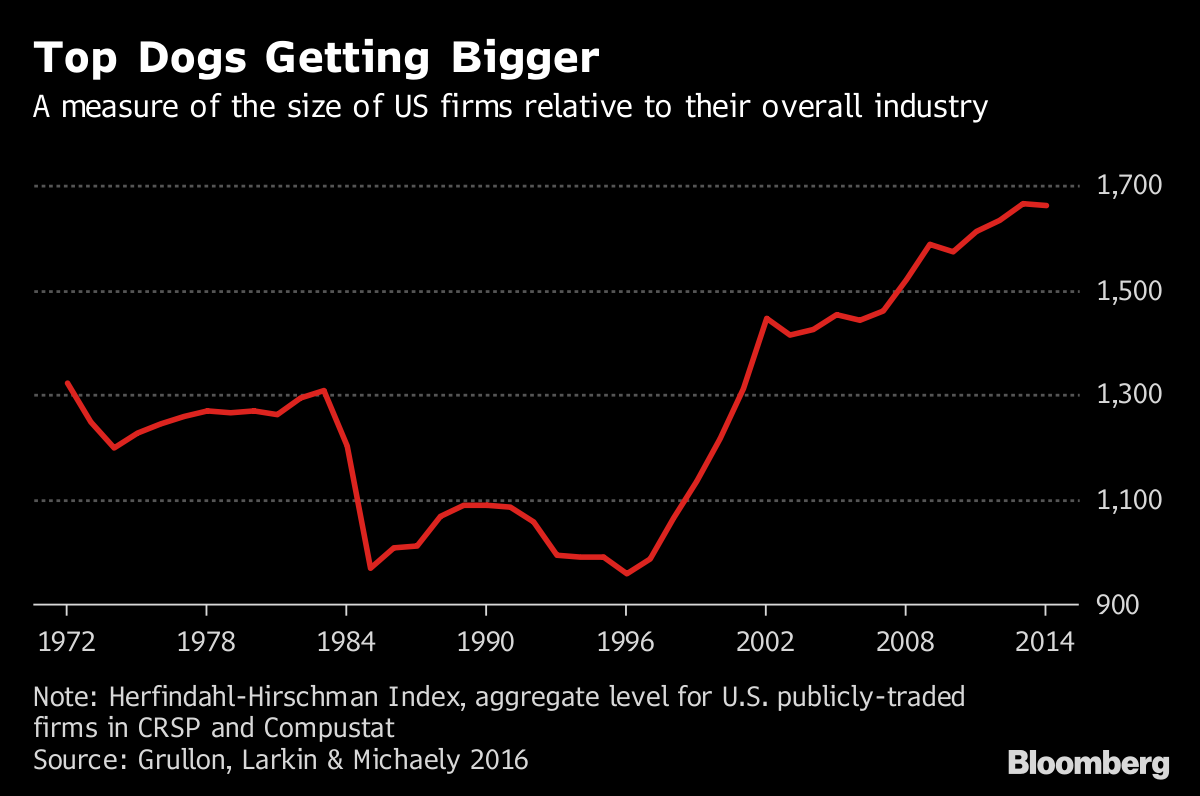 The concern has reached the Federal Reserve, which devoted hours of its annual Jackson Hole retreat this summer to hand-wringing. But any American shopper can see the concentration. Amazon handles about half of U.S. e-commerce sales. Americans use Google for more than 60 per cent of online searches. Apple and Samsung sell more than 70 per cent of mobile phones.

Concentration doesn’t automatically mean decreased competition. Jan Eeckhout, a professor at Pompeu Fabra University in Barcelona, points out that if there are only two gas stations in a town, they might still compete for the lower price. The key to gauging competition, he says, lies in measuring a firm’s markup -- the gap between production cost and the price customers pay.

Eeckhout and other researchers found that from 1950 to 1980, average markups were roughly steady at about 18 per cent of cost. Since then, markups vaulted to 67 per cent. They also estimated that average profit relative to gross domestic product quadrupled from 1980 and 2014. Additional research bolstered those findings by showing a correlation between profit and sector concentration.

What’s so bad about higher profits? In theory, everything. 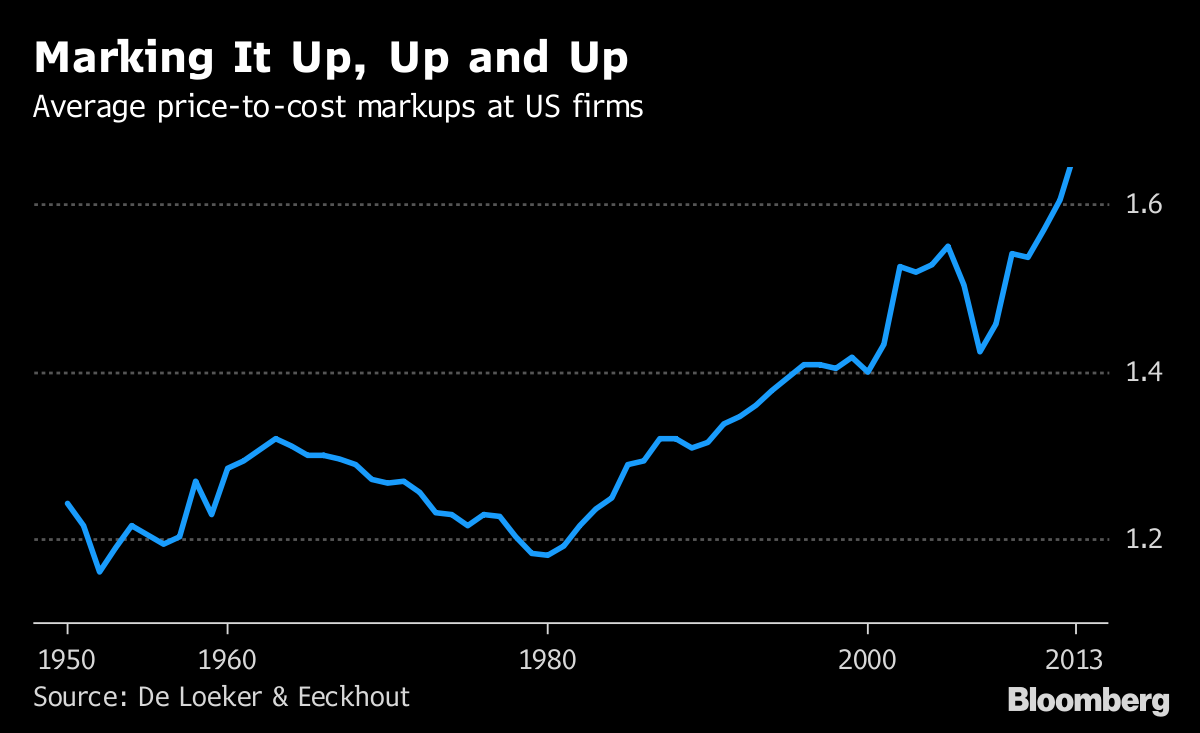 That self-correcting process seems to have broken down. The rates at which companies are born and die are important gauges of dynamism in the economy, and both are on the wane. Firm entries plunged 40 per cent from 1977 to 2014, according to U.S. Census Bureau data.

Economists also lament feeble levels of business investment over the past decade as evidence the biggest companies feel less compelled to maintain a competitive edge.

“Companies innovate not to make us happy, but because they want to keep ahead of potential competitors,” said Ioana Marinescu, a University of Pennsylvania economics professor. “If there’s no real threat for someone else to come in, the incentives to invest and innovate are blunted.”

Lower investment can, in turn, harm the pace of productivity gains that are so crucial to economic growth. That’s not the sole factor, but measures of productivity growth in the U.S. have been disappointingly low for more than a decade. 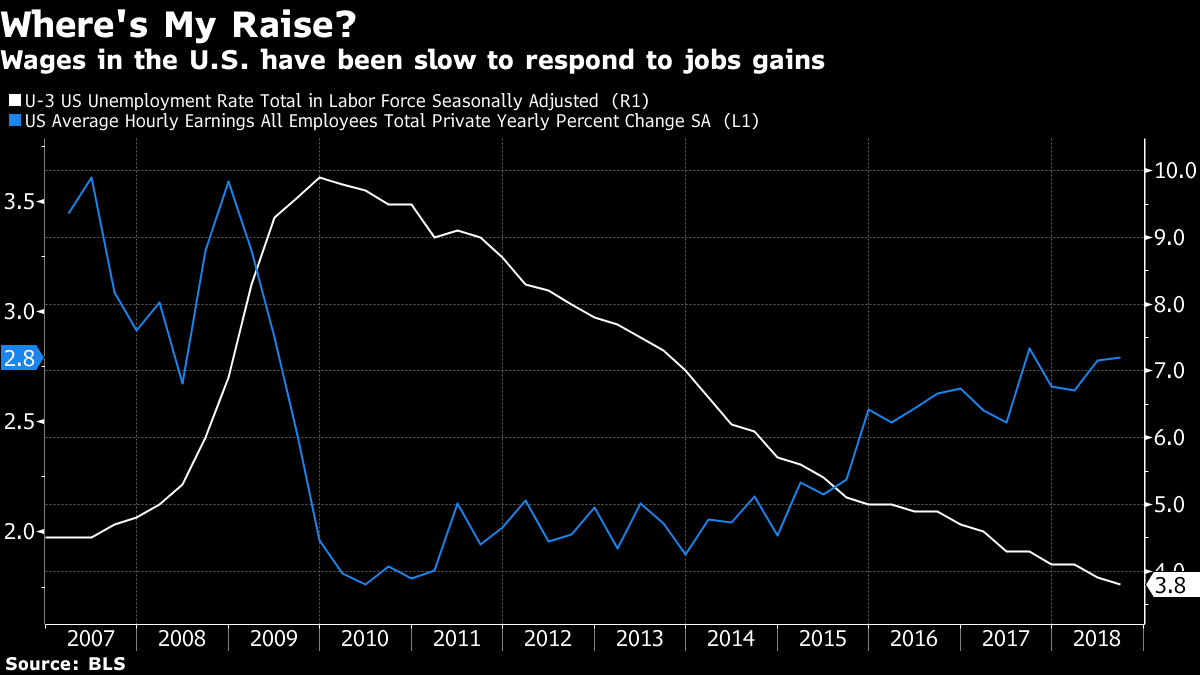 The labour market presents yet more reason to worry. With concentration, many American workers, especially in rural areas, have found the number of potential employers shrinking.

In a 2017 paper, Marshall Steinbaum of the Roosevelt Institute and two co-authors found that higher employer concentration in a worker’s particular labour market -- an overlap of occupation and geography -- correlated with significantly lower pay. That provides a partial answer to why wages have remained so sluggish even as unemployment has dropped to an almost 50-year low.

Many economists blame lax antitrust enforcement for the epidemic in market concentration. But concentration is occurring in many other developed economies, including those with antitrust environments stricter than in the U.S.

David Autor has another explanation -- the “superstar firm” thesis. The Massachusetts Institute of Technology professor argues that globalization and technology have combined to magnify the small competitive advantages of leading firms, helping transform them into juggernauts.

An organized push to ramp up antitrust enforcement is just starting. The Federal Trade Commission has begun a series of hearings on competition and consumer protection, but this is an era when market power equals political power through unlimited corporate campaign contributions.

Government intervention has traditionally been viewed in the U.S. as something necessary to address specific harms. Americans tolerate curbing companies, for example, to protect workers’ rights, consumer safety or the environment. In this case, the interventionists are making a case that government action is required to protect the free market itself.

“Some of this is transitory, but there are also many aspects of these markets that never get resolved,” Eeckhout said. “If there had been no intervention in the railway market 100 years ago, those monopolies would definitely have persisted.”