How the emerging world of virtual reality gaming is creating opportunities for YDX Innovation - BNN Bloomberg
{{ currentBoardShortName }}
Markets
As of: {{timeStamp.date}}
{{timeStamp.time}} 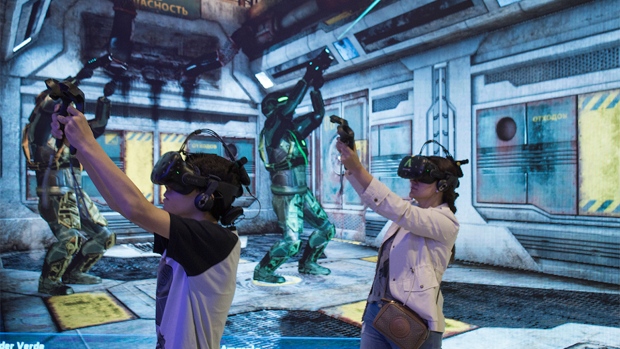 Arkave VR provides the most engaging and entertaining VR games at the best price of the market and a truly immersive experience for your clients. , Image courtesy of Market One Media

The state of virtual reality (VR) reminds Daniel Japiassu of where websites were at in the late 1990’s—picture the splashy colours, flash animation, and limited font variety.

Fast forward to today and Japiassu is CEO of Vancouver-based YDX Innovation Corp. (TSXV: YDX | OTC: YDRMF | FSE: A2AP0L), a company crafting VR gaming and esports experiences, working towards a near future where VR will be as ubiquitous in business and education as websites and the smartphone are now.

Back in the ‘90s, Japiassu worked with a technology consulting firm building early websites for firms in Brazil. While building a banks’ new site, which was their first ever, he recalls an executive asking his team why they’d ever need a website. Who would ever bank on a website?

Fast forward a few years, Japiassu fielded similar questions about smartphone applications. Then everything changed when Apple released the first smartphone that was both powerful and easy to use. The technology caught up to the potential.

Today, he fields similar questions about VR. The technology has been around for years but has been a niche product—challenging to use with limited application. Fortunately, the newest generation of headsets are powerful and simple. It’s becoming a field with the potential to take off.

“Now, we will see a moment where the first bank will have a VR application,” notes Japiassu.

“There are a lot of good options for hardware that are affordable and high quality. The hardware has finally caught up to the hype. But, it’s like the smartphone, which took a while to take off. It took the Apple phone to make it easy.”

YDX was born out of creating human experiences with machines

While a focus on VR and esports is relatively new for YDX, the company was built around using emerging technology to create human experiences.

“The hardware has caught up to the hype.”

Formed in 2001 out of exploring how to use technology to create effective interactions between humans and machines, YDreams Global started as a company creating branded experiences with cutting-edge technology—of the day.

Over the next decade-and-a-half, the company worked with brands such as Coca Cola, Cisco, and McLaren to build early VR experiences, computer vision, and augmented reality experiences, often for trade show booths or pavilions at big events like the World Cup of soccer and the Olympic Games!

They worked with museums to create interactive exhibits, using technology to bring history to life.

We are pleased to announce the creation of a new exhibition honouring @UN High Commissioner for Human Rights, Sr. Sergio Vieira de Mello, who had an inspiring career and had a record of successful conflict negotiation🎖️

Japiassu was hired to head up their Brazil operations in 2006. For the next decade the company grew organically, expanding operations across Europe and Brazil, drawing on new technology to continue creating ever-better branding experiences.

Fast forward to today, and the company has gone public, rebranded as YDX Innovation, and moved its headquarters to Vancouver, British Columbia. Over the course of this year, the company has acquired two firms and are in the process of closing their third deal with complimentary technologies and skillsets boosting the company’s re-focused mission to create experiences in VR and egaming—technologies that are only now coming of age.

YDX drew on new capital available after going public in 2016 to create VR gaming venues called Arkave Arenas. In the arena, up to three people can play games together in immersive worlds within a dedicated room.

Think of the Star Trek holodeck, but with a wireless headset. The focus is making the arenas easy, for both the players and the venue owners. They are plug-and-play, with headsets using wireless interfaces YDX created, rather than bulky, heavy wires tying players down. The set-ups are being picked up by venue owners to enhance their offerings—bowling alleys, trampoline parks, hotels, and also fairs. The first arenas rolled out in early 2019.

“Today, that’s the problem with VR,” Japiassu says. “It’s technically still tricky. Our focus is to make it easy.”

Arena players can take on some of the three games YDX has created, such as Last Squad, Romans from Mars or Power Players, both launched in April, or, because the arenas have an open platform that allow third-party games, venue owners have the option of adding other games as well.

The company has maintained its initial work in creating brand experiences, but now with the same VR technology and easier application. Last year, YDX worked with Disney to create a new game called “Mickey Mouse and the Golden Heart.” This game was created exclusively for Arkave VR to be distributed in partnership with The Walt Disney Company Brazil.

A common thread is to build easy, compelling packages of hardware, components, and software to make the experience seamless for clients and the user.

They are already taking a similar approach to crafting their own exhibits, and not just the exhibits they’ve created for clients in the past. YDX has crafted unique experiences exploring the importance of water and showcasing the talents of Van Goh, both of which are rented out by museums and educational facilities. Using a mix of in-person experience and VR, these experiences delve into the topics in ways that weren’t possible a few years ago.

While the VR gaming market is just emerging, it has great potential. According to Newzoo, gaming will generate USD$159.3 billion in 2020, 9.3 per cent more than a year earlier. VR gaming is also forecast to reach some USD$44.7 billion by 2024.

The potential for other applications is only starting to become apparent. YDX’s team is looking towards a future where VR won’t have become common just in gaming, but also in applications as broad as banking, business meetings, training, and schooling. The Arkave arenas could easily be adapted to offering courses—say in the use of a company’s new fire extinguisher or first aid.

“Virtual reality is not just for gaming,” Japiassu explains. “Five years from now, rather than a Zoom meeting, people will just put on a VR headset. I think that’s where the market will go.”

He adds, “There are a lot of great ways to have meetings in VR to collaborate. It’s as close as you can get to sitting in the same room and have a meeting. You can’t really do that on Zoom. There’s a change of habit that is beyond gaming. The situation in VR education and training is similar, as there are great applications that should be massively adopted.”

But most people don’t yet own a headset or have even ever used one. So, the next question is how to roll VR out to the masses. It’s the same question facing website creators in the ‘90s and smartphone companies in the 2000’s.

“We are finding a way to be part of that. Up to this point, we have been very focused on a location-based model,” Japiassu explains. “The first division comes from that area, creating live events and exhibits. That’s what we love, to entertain people in the physical world. But we’ve continued to evolve.”

Pandemic prompts a pivot in direction

However, the COVID-19 pandemic has crimped many of the big public events YDX relied on—at least for the moment. It has also, however, created swelling demand for gaming in-home as people seek to keep busy while minimizing social interaction. This has promoted YDX to accelerate plans to focus on the online and in-home experience. Those are areas they’d planned on getting into but were waiting for the technology—and adoption of it—to evolve enough to justify the investment.

“COVID changed that and accelerated things,” says Japiassu. “It made people pursue VR entertainment for home usage. With COVID, we had to go back and ask ourselves how we could take what we do and translate it into having a strong online presence.

YDX is now moving into the home VR game industry, but is also delving into esports, which involves competitive video gaming for crowds, the way sports like hockey and basketball are played.

YDX moved into esports with the acquisition of BEAT Gaming earlier this year. Since its creation in 2011, BEAT has organized over 30 professional and semi-pro esports events, which have reached over 40 million views globally. Adding to its roster of events, the company recently organized a COVID tournament which was carried out entirely online rather than in an arena, which is what has always been done prior to the pandemic.

Adding Purple Made Advisory to the mix with another acquisition is taking YDX’s foray into egaming even further. This research and data analysis firm focuses on game players—working with teams to analyse a gamer’s play the way a golf coach will use technology to analyze and work on a pro golfer’s swing.

Esports are becoming big business. According to Statista, esports will reach almost USD$1.6 billion in revenue in 2023, with 11.7 per cent annual growth.

YDX’s initial focus in esports was to use its virtual gaming experience to create gaming playgrounds that would be installed at the big tournaments, becoming part of the fan experience. As VR gaming becomes a bigger thing in esports, the linkages would become stronger.

With the move to online tournaments due to COVID, plans have adjusted somewhat, but as it will in many fields COVID will likely leave a long-term mark, with some changes remaining even after the pandemic is behind us.

Japiassu envisions a post-pandemic future where the industries will take the best of both worlds and combine them—perhaps holding initial rounds of tournaments online to bring in amateur players, and then bringing the winners together for big, festival-like tournaments, rich with VR gaming.

“It’s going to be a natural combination of the two worlds,” he says excitedly. “Immersive experiences in gaming is going to be the focus of the company for a long time.”

Watch the company’s Market One Minute to learn more about all the different initiatives they have in the works.

Learn even more about YDX Innovation by visiting their website here.

Make sure to also follow YDX on social media: