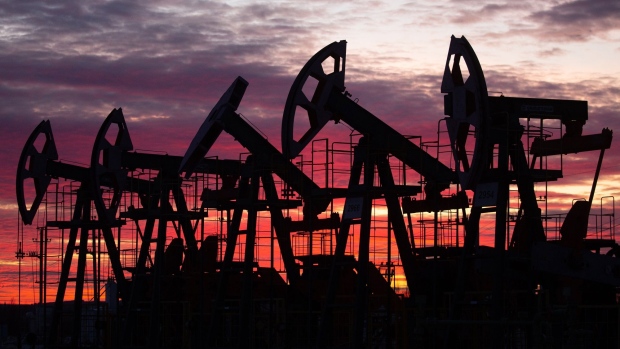 (Bloomberg) -- Oil traders are asking the question whether they can now handle more Russian oil following adjustments to sanctions by the European Union. The answer appears to be yes, a little.

The future flow of Russian crude and fuels is critical for the global oil market, but also provides funding for the nation’s invasion of Ukraine.

If shipments are halted, it could take a huge amount of supply off the global market. If they are diverted away from Europe, the main impact could be a major reshuffling of trade flows, but a smaller loss of cargoes.

The EU and its allies have been looking at ways to balance three aims: hurt Moscow’s income, mitigate the hit on their own economies and minimize any spillover on the global economy. But allies differ on the best way to achieve all that.

EU sanctions forced a retreat from the country by the world’s biggest commodity trading houses, which had spent decades cultivating strong relationships with Moscow.

Recent updates change things a little, although most say privately that they remain committed to diminishing Russian oil business.

Here’s a look at what’s changed, what hasn’t, and what might.

The European Union adopted a number of corrections to previous sanctions last month.

Among them, the EU introduced an exemption that allows transactions with some sanctioned entities, including banks and state-linked companies such as Rosneft PJSC, if they are deemed essential to shipments of food, agricultural goods and oil to third countries outside the EU.

Rosneft is Russia’s biggest oil producer and a huge exporter. The company also operates a number of terminals and from ports used by other firms.

The purpose of the changes is to avoid any potential disruptions to food supplies and avoid situations where companies and traders might be overcompensating when applying the bloc’s sanctions.

Announcing the measures, the EU said they were introduced “with a view to avoid any potential negative consequences for food and energy security around the world, the EU decided to extend the exemption from the prohibition to engage in transactions with certain state-owned entities as regards transactions for agricultural products and the transport of oil to third countries.”

That means traders can now deal with Russia’s state oil company, when before they could not. However, it doesn’t solve everything.

A ban on European operators providing services, including insurance, needed to ship oil anywhere in the world remains in place and is not overridden by the rules agreed last month.

A sixth package of sanctions adopted by the EU in June includes a ban on services, including insurance, related to shipping oil within the EU and to third countries outside the EU. The provision on third-country shipments come into force in December for crude shipments, and in early 2023 for refined petroleum products.

The ban will prohibit EU operators from providing, directly or indirectly, technical assistance, brokering services or financing and financial assistance, related to the transport, including through ship-to-ship transfers.

The suite of measures also include a ban on imports of Russian seaborne oil into the EU that will become operative later this year. Imports via pipeline to landlocked countries such as Hungary are exempt from the embargo as is oil that may transit through Russia but doesn’t originate there. Hungary and other nations exempt from the ban are not allowed to resell their supplies.

Other Group of Seven members, including the US and the UK, have also announced that they will phase out Russian oil imports.

What this means is that a big trader could, in theory, organize a shipment to a non-EU country, but lots of the basic aspects of that -- insurance, brokering, financing -- cannot be provided by EU companies. That will stymie a huge part of the trade.

G-7 nations and the EU agreed at a summit in June to explore the introduction of a price cap on Russian oil. The mechanism would operate by providing key services needed to move oil, including insurance, only to buyers that purchase Russian oil below an agreed threshold.

The mechanism is being primarily pushed by the US which worries that the EU’s full ban on insurance could see oil prices spike.

Some G-7 members are skeptical about that analysis and also believe that such a mechanism can only work if key buyers such as India are on board. And there are questions about how the cap might be enforced given a reluctance so far to deploy extra-territorial sanctions on nations and entities that don’t apply restrictions imposed on Russia.

To be sure, discussions are ongoing and the US would like to see an agreement before the EU’s ban comes into effect.

If a deal is eventually reached, then it is likely that the EU would have to amend its insurance ban as it seen as an essential component of any arrangement. But as things stand there is no deal yet and the EU’s measure is set to come into force later this year, intact and as passed in June.

When the EU was concluding its measures, the UK signaled that it would introduce restrictions on insurance but has yet to set out the details of its measure.

This is relevant because the UK is home to the organization -- the International Group of Protection and Indemnity Clubs -- whose members cover the vast majority of the world’s oil trade against risks including oil spills.

However, that cover is reinsured globally, and is intertwined with many European businesses.

So it’s hard to see the UK effectively allowing the full underwriting of a trade that Europe abandoned, along with arrangements that would allow for reinsurance to be tapped outside of Europe.