No big worries in AT&T deal for Time Warner

If you’ve been reading the headlines this morning, you may have seen the focus on AT&T’s planned acquisition of Time Warner (TWX.N) – the Financial Times saying “the U.S. demands CNN sale as price for AT&T time warner approval,” The Wall Street Journal saying “U.S. threatens to derail AT&T deal” and the New York Times stating “CNN grudge hovers over AT&T.”

Well, let’s take you through what’s going on. And we should note, there’s a BNN connection to this story.

First, the basics: antitrust regulators in the U.S. are reportedly pushing AT&T to divest certain assets to get the deal approved, with much of the focus being on Time Warner’s turner television unit.  That division includes CNN.  And it’s no secret U.S. President Donald Trump has had a war of words with that network.

When the deal was announced in October of 2016, BNN spoke with antitrust expert Makan Delrahim.  That interview took place before Trump was elected President; it was also before Delrahim went on to work for President Trump in the White House as deputy counsel.  And it was also before Delrahim was selected to lead the Department of Justice’s antitrust unit – a role he officially took in September, when he was confirmed by the senate.  Which means that Makan Delrahim is now the antitrust chief in the U.S. - which means he is now the point person on the AT&T-Time Warner deal. And his only public comments on that deal… came in that BNN interview.

So what did he say in that interview? Well, most of the attention has been on his comment that, “I don’t see this as a major antitrust problem,” in reference to the deal.  He also noted that “from a technical standpoint, I think these folks (a reference to AT&T and Time Warner) would have an easier route toward approval than a merger of two competitors.”

Those comments have become ammunition for AT&T, which has made it known it believes any divestitures associated with the deal – particularly CNN – would be based on political motivation, as opposed to antitrust issues. On top of that, U.S. senator Elizabeth Warren has already asked Delrahim to recuse himself from the AT&T review because of his comments in the BNN interview.

We’ve obtained a letter sent this week by Stephen Boyd, the assistant attorney general, to Warren, in which Boyd states the following about that BNN interview: “Makan Delrahim had no professional or personal connection with, or any non-public information about, the proposed merger then or at any time prior to his confirmation.” It goes on to say that warren had focused on a “selected quotation from that interview.”  And that the “full context demonstrates Delrahim indicated the proposed merger should and would get a full and complete review” that would be “be based on the law and the facts.” 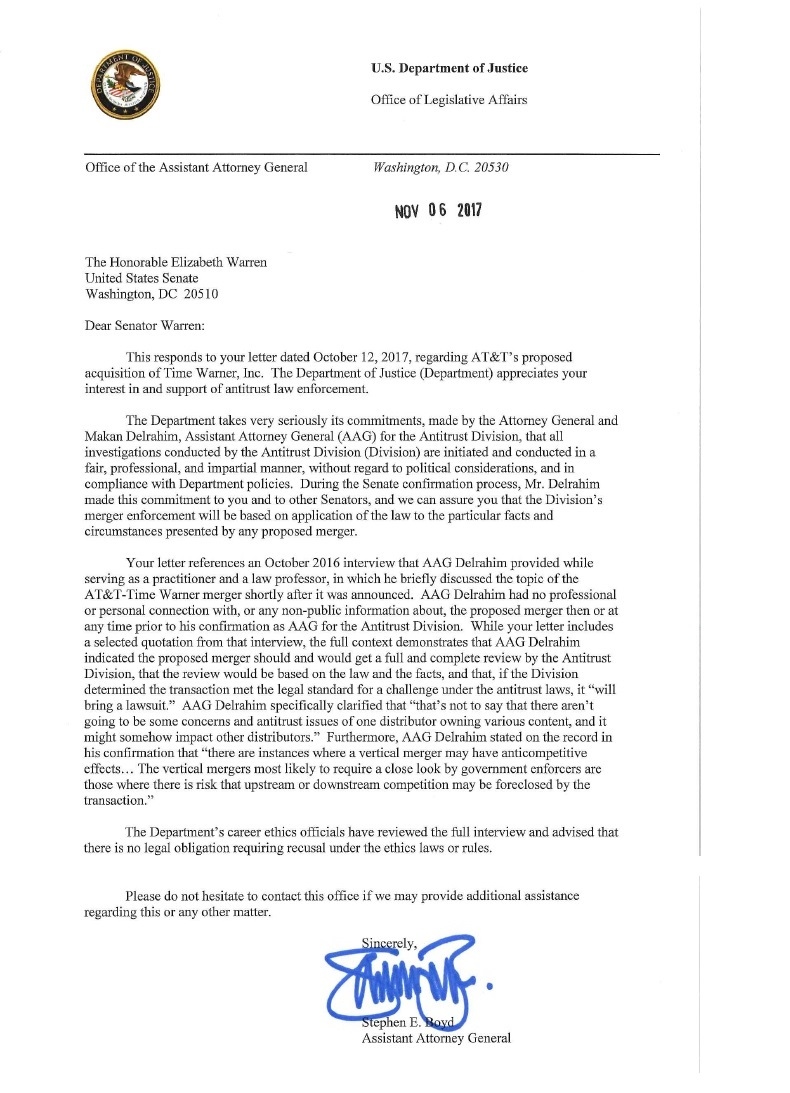