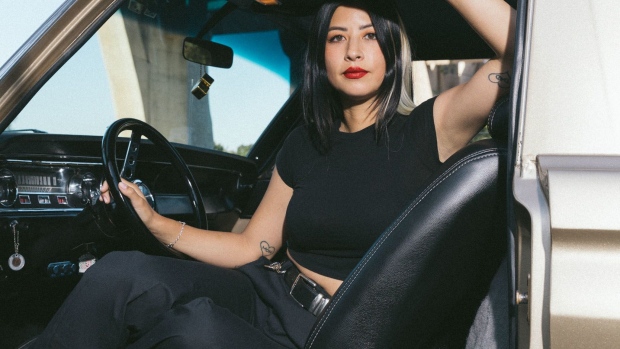 (Bloomberg) -- We love cars. We love car people. That’s why we’re starting this new series highlighting the stories of how prominent collectors got the rides they love most. Often, the story behind the car is just as great as the car itself.

Adri Law is the perfect subject to kick off our series. The lifelong Angeleno is a vintage auto aficionado: A photographer by trade, she co-founded the annual Paradise Road Show in Palm Springs, Calif., in 2016 to celebrate car and motorcycle classics from 1976 and earlier; its Nashville offshoot will take place on July 30.

She also owns a 1965 Ford Ranchero in a Champagne gold that melts into the horizon in the soft light of a California sunset.

The half-car, half-truck Ford Ranchero may be less ubiquitous than its famous cousin, the Chevrolet El Camino, but it comes from a long line of vehicles built for practicality and usability. Ford was building Roadster Utilities in Australia as far back as 1937, and the Ranchero would hit the US by 1957. All told, Ford sold just over 500,000 units in 22 years and seven generations of production, according to the collectable car insurance company Hagerty, with the rarest versions coming from the late 1950s.

While the Ranchero lacks the pop-culture prominence of other vintage cars, lovers of the cult-classic 1984 film Paris, Texas will appreciate the two-tone 1959 Ford Ranchero that figures prominently.

Law, 31, had previously owned a 1964 Ford Falcon and a 1970 Honda CB 350 motorcycle, and she also owns a 1999 Harley-Davidson Sportster motorcycle, so we were dying to know why the open-bed Ranchero caught her eye.

Turns out it had as much to do with her own evolution as it did with the car itself. Law started her photography career as a teenager inspired by old punk and hardcore show photos—“obsessed with anything from Glen Friedman and Edward Cover,” as she puts it—and honed her skills shooting nightlife, music, and motorcycle scenes in Los Angeles. Years later, her work for clients including Harley Davidson, Vans, Marlboro, Atlantic Records, Reformation, Adidas, and Bulleit Whiskey has taken her around the world, from Alaska to the Swiss Alps to Mexico. And it has put her in contact with Southern California’s coolest old cars.

Here is her story.

So how did you know you wanted a Ranchero? This wasn’t your first vintage car, was it?I previously had a 1964 Falcon that I had worked on a bit. It was a great starter car. I put a lot of money into parts and replacing stuff. But I didn’t have to pay for too much labor, because I was working on it with an ex-boyfriend of mine. I learned a lot from him, and I’m really grateful for that opportunity. He knew how to work on cars; his dad knew how to work on cars. So I had someone to guide me through that process. That deserves credit, for sure.

But then things changed. With the car and the dude.I loved that car. It was fun. I learned a lot. I got to work on it. I learned how to drive stick on it. It was a fun experience, but it started to quickly feel like not me.

How was it not you?I thought it was really cute. And then I was like: “This is too cute. This is not me.”

And that was when you knew you needed something a little rougher or tougher?I did have my eye on a Ranchero before I found my Falcon. But it was a little too resto-mod looking. Too old-guy-in-the-valley or something.

It’s a fine line!In retrospect, that car would’ve been easy to make better. But at the time, I wanted something that was already cute inside and very quintessential classic car, which is what the red Falcon was. I ended up going with that. It was a good price. And then I worked on it, learned a lot, and got over it.

Our tastes evolve as we evolve.Yeah, I just really wanted something that felt more me and more neutral. Because the Falcon was red and white inside. It looked like a little diner. I ended up selling it to a friend of a friend’s girlfriend. I was excited to sell it to another woman.

What about the Ranchero appealed to you?I had had something so cute, so I wanted something like a little tougher. And I didn’t want some flashy-ass color because the red was … it was too much. I was set on it being black or white. Very restrictive. But also a black old car is a really difficult thing as far as keeping it looking good and hiding anything f---ed up about it.

The look and style of a car represents so much, doesn’t it?All of my things that I like to have are a visual representation of me and my taste, you know? To me, someone who is a photographer, it is so visual to me. It’s important for my possessions to represent me. Those things are very important to me.

I know you had a mechanically minded friend, DV-Mechanics owner Dorian Valenzuela, help look for something that would fit your taste. True. I said, “I want a white car or a black car.” And I had found a couple of Rancheros online, but none of them were great. I’d be sending Dorian listings off of Facebook market and he’d be like, “No. Piece of s---, piece of s---.” But then he had actually seen this gold one on offer, and I had seen it, too, but I had only wanted black or white. But it caught his eye and he had already inquired about it before I said I was interested and he is like, “Adri, honestly, this car’s good.”

So the next step would be to go for a drive.The car was in the desert. It had belonged to a couple, and it was the wife’s daily driver. She was a flight attendant in Palm Springs, which was perfect. She’d drive like six miles and then park it every day.

We drove out and when I saw it, I was like, “Oh man, that car sure is pretty,” and then I drove it. At that point it was really just me leaning on Dorian asking as far as mechanically, “What are we looking at?” Because that’s where the expensive things lie; the interior’s already done up, the car looks good. But my important thing was that I’m not going to have to replace the motor.

That gets so expensive—sometimes more expensive even than the car is worth.The good news was that the husband was either a pilot or an airplane mechanic, so he knew what was up with his car, and he had worked on it. He had done a lot of the work himself. So it had a new BluePrint 302 V8 motor in it, power steering, vintage air. There was a lot of love and energy and money put into this car. That alone is so massive. All those things cost a lot of money to do your car.

That is a risk that you take with any vintage car, especially one that might be 40 or 50 years old. They need a lot of love and patience—and that’s even if you don’t need to do major things like replace the motor.I do realize that I’m lucky to have had that guidance from other people, because it’s hard to just get into cars. Having these things is a luxury. An old car can be a giant headache—and a lot of times they are, you know what I mean? And just because this Ranchero has a new motor and all that stuff, it’s an old car regardless. There’s always going to be something with it. It’s not like a reliable brand-new car. But we knew that this car was good. It needed little things like new tires. But anytime you buy a car, for the most part, they always need new tires.

Did you bring the cash with you? Or did you hope to wire him the funds?I had the cash. I was ready to go. You gotta be ready to go if you want something like this.

Dare I ask: Did it make it back, driving to LA?Yes! I drove it back, and it was amazing. It was totally fine. It had no issues, and the air conditioning was amazing: It was very cold. I drove it all the way home. Well, we stopped at the outlets, too.

Very necessary! So last question—what’s the best way to get into cool cars if you love cool cars but aren’t quite sure how?Start going to car shows! See what’s up with the culture and if it’s something you’re interested in. You don’t need to dive head-first and do it all at once. But dip your toe in the water. Talk to other girls who have cars, get involved in the scene. There are not that many of us.

This conversation has been edited for length and clarity.