How this non-dairy brand is ushering in a food revolution – and attracting investors - BNN Bloomberg
{{ currentBoardShortName }}
Markets
As of: {{timeStamp.date}}
{{timeStamp.time}}

If you are looking for a plant-based alternative to milk, there are now multiple options, made from oats, soybeans and coconut, on grocery-store shelves. But non-vegans in search of a dairy substitute in their coffee, cereal or baking also want something that tastes as good, if not better, than the most flavourful milk on the market.

To the innovative minds behind dairy alternative startup bettermoo(d), the best-tasting milk comes from Europe’s Alpine region, where cows graze on organic grasses, herbs and flowers to create mouth-watering milk, cream and cheeses. That’s why this Vancouver-based startup plans on using its motto of “what a cow eats and a human needs” to include those same plants in all of the company’s products, including its inaugural oat-based beverage, Moodrink.

The company has worked extensively with scientists and food experts globally to develop groundbreaking formulations that are unique to its industry. “The goal with bettermoo(d) is to be an inclusive brand that creates innovative and great tasting products to allows making changes to diets easier,” says Nima Bahrami, the 31-year-old entrepreneur who created the company in 2020.

bettermoo(d), which was also started by founding team members, including singer-songwriter Bryan Adams, is developing a full slate of plant-based substitutes for all dairy products including milk, yogurt and butter aimed not just at the vegan market but at every consumer who’s willing to opt for cruelty-free, environmentally benign foods – as long as they taste similar to the cow-derived original.

It’s that ambition to change ordinary people’s eating habits that caught the attention of Adams. Over the last several years, the Vancouver-raised rocker has been trying to attract audiences to something other than his music: sustainable eating. While Adams has mostly been espousing his love of plant-based foods on Instagram and in interviews, he came to realize that real change could only happen in the mainstream grocery aisle.

As a founding member of the brand Adams will promote bettermoo(d)’s innovative products. “Fostering responsible eating habits, such as choosing plant-based dairy alternatives, is something we can all do to help lessen animal cruelty and help our environment,” says Adams. (Beyond the treatment of dairy cows, the cattle industry represents the single greatest source of greenhouse gas emissions in the agriculture sector.)

Notwithstanding the crossover success of plant-based brands like Beyond Meat, Impossible Foods and Garden Protein International in recent years, the meat-and-dairy alternative industry is only in its infancy, he says. “The market is ever-evolving, but it’s not there yet,” Adams adds. “It will take a couple generations of parents wanting to give their children a better start without animal products. My daughters go to school with 500 other children, and they are the only vegetarians in the whole school. That’s going to change.” 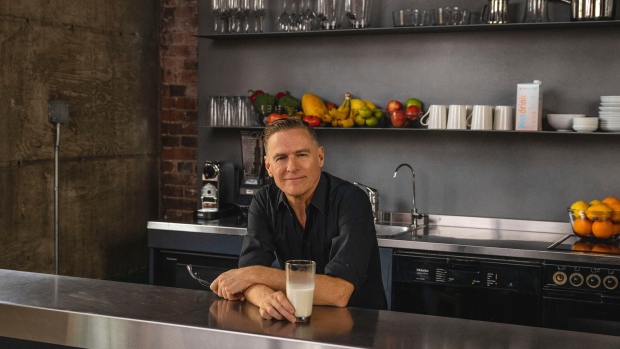 Making the world a better place

With Moodrink, bettermoo(d) is “trying to give consumers another option for one small way they can make the world better,” says Bahrami. In addition to being vegan and dairy-free, Moodrink is also organic and gluten-free. Unopened containers can be stored on a shelf at room temperature.

At a recent trade show for vegan food and lifestyle products, bettermoo(d) received an enthusiastic response from consumers and retailers. From its packaging to its social media presence, it comes across as a fun alternative to dairy foods. It also received 12,000 pre-orders for its free test packages, which give people who sign up online a chance to try out the drink once it becomes available in Canada in early 2022. The company plans on using both online and offline distribution channels.

“Part of our clientele is vegans and vegetarians, and that’s fantastic, but we also really want to reach the general consumer who is willing to try something if it has these other benefits,” Bahrami says, adding that the partnership with Adams will help bettermoo(d) reach that wider audience. “We want to build a complete dairy replacement brand.”

In November, bettermoo(d) listed on the Canadian Securities Exchange – a junior stock exchange in Canada – under the name of its parent company Happy Gut Brands (CSE:HAPY). It now has a scalable financial platform from which to take on the US$600-billion dairy industry.

Most people don’t yet know that the company is public which makes now the ideal time to invest – before the masses take notice. Since most companies go public at a much later point,  investors have a chance to participate at an early stage before the company moves to a senior stock exchange like the TSX or NYSE.

The company plans to build distribution in the U.S. and, eventually, Europe whether it be through expansion or acquisitions of established plant-based food brands. “We’re looking at everything that’s available to us,” Bahrami shares. “We’d love to be a global brand.”

As for Adams, he just hopes more people will “be on the right side of history. Going plant-based is better for the planet and better for your health,” he says.