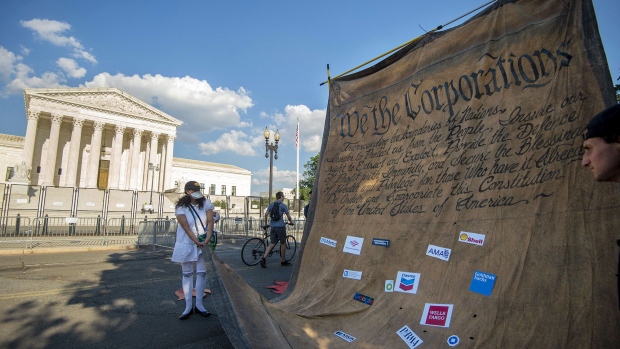 WASHINGTON, DC - JUNE 30: Members of Extinction Rebellion DC, ShutDown DC and Arm in Arm DC carry a giant model of the constitution, altered to say We The Corporations during their "Tour of Shame", marching to the homes of senators they consider most responsible for a reduction in climate change regulations on June 30, 2022 in Washington, DC. In a 6-3 decision, the Supreme Court announced today that they sided with the state in West Virginia v. Environmental Protection Agency, which reduces the EPA's authority to regulate greenhouse-gas emissions. (Photo by Bonnie Cash/Getty Images) Photographer: Bonnie Cash/Getty Images North America , Photographer: Bonnie Cash/Getty Images North America

In 2021, President Joe Biden announced that the US will halve its emissions by 2030. That pledge turned the country from a laggard on green action to one that came close to matching the ambition of the climate-forward European Union.

But last week’s Supreme Court ruling has made it harder for Biden to put his country on track to meet the goal. It comes on top of stalled climate legislations that would have helped.

The ruling in the case West Virginia v EPA said that the country’s Environmental Protection Agency has no authority to shift power generation away from fossil fuels to cleaner sources on a system level. Though it stopped short of the worst-case scenario: taking away the EPA’s ability to regulate greenhouse gases altogether. The decision was supported by six Republican-nominated judges and opposed by three who were nominated by Democrats.

More than two-thirds of Americans want the government to do more on climate, according to a 2020 Pew survey. But that hasn’t been enough to push through the policies needed.

“Our system has not been very effective lately in translating public preferences into policy change,” said Daniel Fiorino, director of the Center for Environmental Policy at American University and author of Can Democracy Handle Climate Change? “There is a sort of built in bias in the US against pro-climate action.”

It doesn’t have to be this way. With that level of public support and a government less divided on the issue, it’s possible to achieve a very different result. Take the UK as an example. In 2008, more than two-thirds of Brits thought that government should do more on climate, according to an Ipsos MORI poll. That year, the UK passed the Climate Change Act. Only five members of parliament voted against the bill, out of more than 600.

Since then, the UK has had five prime ministers. It has experienced two financial crises, Brexit, one pandemic, and is currently suffering through the highest inflation in 40 years. Yet each successive leader has only strengthened climate goals. The act’s initial target was to cut emissions by 80% over 1990 levels by 2050. That has now been brought forward to 2035.

High levels of public support was just one ingredient. The process of creating the Climate Change Act began in 2005, with a campaign orchestrated by the nonprofit Friends of the Earth. Musicians like Radiohead’s Thom Yorke jumped on board, and nearly 200,000 people wrote to their MPs to support a climate bill.

“We had this populace who were educated, because we had the media carrying good stories about climate change,” said Bryony Worthington, a member of the House of Lords and a lead author of the Climate Change Act. “There was a feeling that if you didn't take this seriously, you'd be punished in the polls, or it would be seen that you weren't a serious party.”

At the time, the Labour government made support for emissions reductions a part of its agenda, but it was also worried about losing coal-related jobs as UK power plants switched to cheaper natural gas in the North Sea. The turning point for the act proved to be the election of David Cameron as leader of the opposition Conservative party.

Cameron wanted to use climate as a way to “decontaminate” the Conservative brand — which had lost three national elections since 1997. He pledged to pass a climate bill if elected. He changed the logo of the Conservative party from a torch to an oak tree. In the 2006 local elections, he coined the slogan “Vote Blue, Go Green.” The Labour party, which was in favor of green action, had to stop Conservatives from co-opting an issue that they championed. With both major parties aligned, it was only a matter of getting the details right.

The law that passed sets out five-year carbon budgets, effectively capping the amount of emissions the UK is allowed in each period. The government has been able to meet the first three budgets since 2008, but it’s now off track to meet the fourth. This is public knowledge because the act also created the Climate Change Committee, an independent watchdog that evaluates the government’s performance once a year.

Among major economies, the UK has seen the largest decline in emissions since 1990 and cuts have sped up since 2008. That’s not all down to the act, but it’s helped. “It has had a soft effect on decision making and investor confidence,” said Worthington.

The act has also had international influence. Dozens of countries now have national-level climate acts, with France, Sweden and New Zealand taking inspiration from the UK’s version.

The US has so far failed to follow suit. One reason may be that while climate change is rising up the priority lists of Democratic voters, it hasn’t among Republicans. It’s also not the top issue for many, regardless of which party they support. A June poll found that only 2% of Americans see climate and environment as their No. 1 priority.

“Climate change is of intense interest to part of the population,” said Fiorino. “But overall, it doesn't really compete with economic, national security and other kinds of issues. It's not something that people necessarily vote on.”