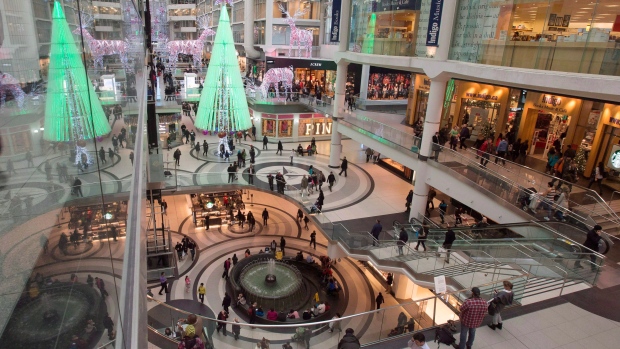 "With rising inflation, things just seem so much more expensive than they were before," said the 26-year-old owner of Sabina Wex Consulting, a public relations agency, in Toronto.

Since Wex's budget has expanded this past year to accommodate the rising costs of groceries, clothes and more, she's found it harder to prepare for holiday spending.

"I'm kind of in a weird place where I'm like, should I just spend the money I want to spend because the cost of living might only go up or should I be more careful about it this year," she said.

Wex noted that she's buying more gifts this year because her friends and family are finally vaccinated and more comfortable meeting in person for the holidays than they were last year.

"It puts a lot of pressure on making it a really great holiday season."

While many people this time of year might feel stressed at the thought of holiday shopping, a new online poll by Coast Capital Savings Federal Credit Union suggests that younger Canadians are feeling particularly burdened.

Younger Canadians are also more likely than their older counterparts to say that they anticipate holiday spending will cause them to go into $100 to $500 worth of credit card debt and delay their long-term financial goals, such as saving for a home, retirement or general 2022 expenses.

The best course of action to alleviate anxiety around holiday spending and avoid credit card debt is to plan ahead, said Jarrett Holmes, a financial planner at Ironshield Financial Planning Inc. in Winnipeg.

So, if you know you're going to spend around $500 in December on holiday gifts, for example, then it's a good idea to set aside approximately $50 per month January to November.

"A lot of people will actually set aside a savings account and assign a nickname to an account, such as holiday spending," he said, which can create some psychological distance from the money and prevent people from spending it in advance.

When it's too late in the year to employ that strategy, Holmes advises setting a financial limit on gift giving.

Instead of going to the mall or online with the mindset that you're going to look for something to buy a specific person, a constraint around spending can help ensure you're not buying more than you can reasonably afford.

And, if that's difficult to manage, some people find buying gift cards help them stay within their spending limit, Holmes added.

If you are buying gifts online, however, it may help to keep items in the cart for over 24 hours to make sure you're not impulse buying items you may regret splurging on later, he said.

Lastly, if you're feeling anxious about holiday shopping and it's specifically related to spending, tell your friends and family about it. "Chances are you're not the only person feeling like that," Holmes said. "They might actually be relieved to know they're not alone."

Wex and some of her friends have been having frank conversations around how the rising cost of living has affected their finances and holiday shopping.

"A lot of my friends are young working professional women like myself and all of us are feeling the squeeze," she said.

"Some of us have decided that instead of getting each other presents, we'll split a bottle of wine during a night in, go out for dinner with each other or book a getaway for later in the year and call that the present."