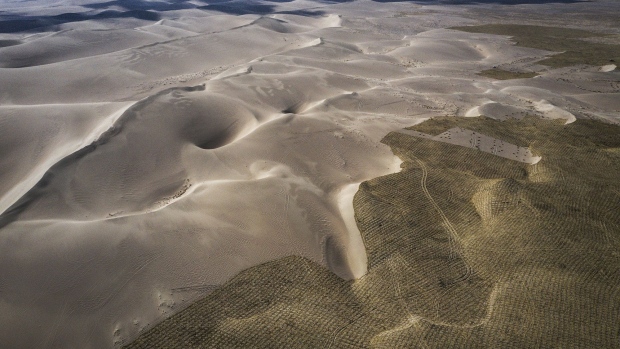 (Bloomberg) -- $300 billion. That’s the money needed to stop the rise in greenhouse gases and buy up to 20 years of time to fix global warming, according to United Nations climate scientists. It’s the gross domestic product of Chile, or the world’s military spending every 60 days.

The sum is not to fund green technologies or finance a moonshot solution to emissions, but to use simple, age-old practices to lock millions of tons of carbon back into an overlooked and over-exploited resource: the soil.

“We have lost the biological function of soils. We have got to reverse that,” said Barron J. Orr, lead scientist for the UN Convention to Combat Desertification. “If we do it, we are turning the land into the big part of the solution for climate change.”

Rene Castro Salazar, an assistant director general at the UN Food and Agriculture Organization, said that of the 2 billion hectares of land around the world that has been degraded by misuse, overgrazing, deforestation and other largely human factors, 900 million hectares (almost 5 billion acres) could be restored.

Returning that land to pasture, food crops or trees would convert enough carbon into biomass to stabilize emissions of CO2, the biggest greenhouse gas, for 15-20 years, giving the world time to adopt carbon-neutral technologies.

“With political will and investment of about $300 billion, it is doable,” Castro Salazar said. We would be “using the least-cost options we have, while waiting for the technologies in energy and transportation to mature and be fully available in the market. It will stabilize the atmospheric changes, the fight against climate change, for 15-20 years. We very much need that.”

The heart of the idea is to tackle the growing problem of desertification -- the degradation of dry land to the point where it can support little life. At least a third of the world’s land has been degraded to some extent, directly affecting the lives of 2 billion people, said Eduardo Mansur, director of the land and water division at the FAO.

Marginal lands are being stressed around the globe by the twin phenomena of accelerated climate change and a rate of population growth that could lift the global tally to almost 10 billion people by 2050, he said. Much of that growth is in areas such as Sub-Saharan Africa and South Asia where land is already highly stressed.

“The idea is to put more carbon into the soil,” said Orr. “That’s not going to be a simple thing because of the natural conditions. But keeping the carbon in the soil and getting that natural vegetation, grazing land etc. thriving again -- that’s the key.”

Last month, at a UN conference on desertification in New Delhi, 196 countries plus the European Union agreed to a declaration that each country would adopt measures needed to restore unproductive land by 2030. The UN team has used satellite imaging and other data to identify the 900 million hectares of degraded land that could be realistically restored. In many cases, the revitalized areas could benefit the local community and host country through increased food supply, tourism and other commercial uses.

Key to returning dry lands to vegetation is the use of fertilizer, said Mansur. “Fertilizers are essential for increasing productivity. Good fertilizer in the right quantity is very good for the soil.”

But decades of poor agricultural practices in both rich and poor nations have resulted in misuse, either from using the wrong products, using too much fertilizer, or in some areas using too little so that the soil loses its nutrients.

Mansur stresses that the problem isn’t about reclaiming desert, but restoring wasteland that was productive before human intervention.

“Don’t mix desertification with desert,” he said. “A desert is an ecosystem. There are deserts on the planet that have to be preserved.”

Nor is it merely a matter of planting trees, since each area has to be considered in terms of the people who live there and how they can live on the land sustainably.

Kenya, for example plans to plant 2 billion trees on 500,000 hectares to restore 10% of its forest cover, but it is also working on ways to adapt to the changes in climate.

We have to improve our livestock and crops to be drought resistant or drought tolerant,” said Kennedy Ondimu, director of environmental planning and research at the country’s Environment Ministry. “We have to look at developing our indigenous vegetables and indigenous livestock gene bank apart from embracing hybrid crop varieties and livestock varieties. We need to prioritize animal breeding.”

In Costa Rica, farmers are using deforested land to produce CO2 neutral coffee, which commands premium prices among consumers. The nation is also replanting rainforest to encourage eco-tourism, which has become the country’s second-biggest earner.

Still, the tide of desertification won’t be easy to turn. In India, more than 20% of the country is considered wasteland and scant water resources are making the situation worse. In Chile, home to the world’s driest desert, the Atacama, the government is spending $138 million improving irrigation as the region’s driest decade on record forces fruit farmers to migrate south to escape the advancing desert. Further north in Brazil, the worst fires in years ravaged the world’s largest rainforest.

Yet, Castro Salazar says dozens of countries are fighting back with programs designed to reverse the loss of farmland and at least 20 nations have major efforts underway to replant lost forests.

“All these countries were able to keep producing the food they needed and growing the forest cover,” he said. “The myth was that in order to increase your productivity and your food sovereignty and security you needed to slash or burn the forest. We documented that it’s not true.”

--With assistance from Anuradha Raghu and Felix Njini.

To contact the reporters on this story: Adam Majendie in Singapore at adammajendie@bloomberg.net;Pratik Parija in New Delhi at pparija@bloomberg.net